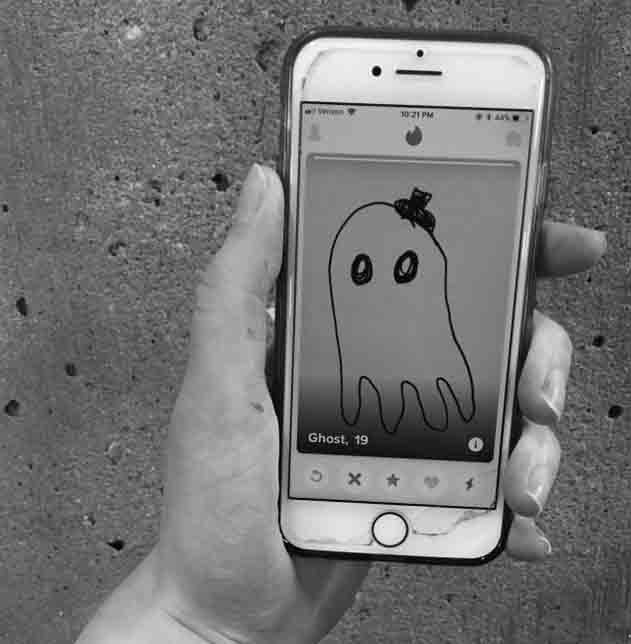 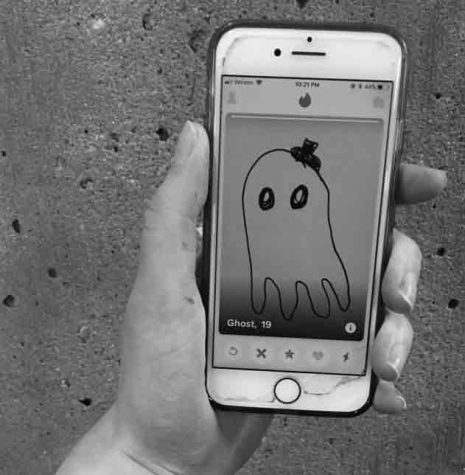 Jada Hampton believes it’s an unwritten moral code that individuals should explain themselves instead of ghosting them.

“That’s the least you can do for anyone,” the sophomore theatre major said.

Hampton defines ghosting as “a temporary or permanent lapse in communication between two people that is one-sided and unexplained, regardless of intention.”

She said the major problem with ghosting is you don’t know the intention of why that person stopped replying, especially if it’s through an app like Tinder.

“Everything is usually going great until it’s not,” Hampton said. “You don’t have the advantage of face to face interaction, it just comes out of nowhere. Dating apps make it easier to dispose of people.”

Hampton said the main app she uses for dating is Tinder, which she feels can be very good and bad for the human race.

“Once you’ve been ghosted those feelings of insecurity and doubt or confusion happen,” she said. “You probably will self-consciously put that on someone else, and you start swiping and talking to everyone because you want to feel worthy again.”

Hampton said although she has been on the receiving end of ghosting, she has also ghosted due to being shy.

“Sometimes there’s a lot of sexual innuendos sent that I don’t even want to address…or I get nervous,” she said.

Hampton said you have to be careful when ghosting because it could be someone’s last straw.

“I ghosted this guy and he called me racist slurs. He obviously felt some kind of hurt, maybe abandonment or a masculinity issue, but it can have serious effects on people and make them lash out,” Hampton said. “His words were ‘you left me on read.’”

Hampton said she feels the humane thing to do is be direct because ghosting can hurt more.

“Words can be very powerful when connecting on social media,” she said. “Using emojis and words hold relevance in their hearts and in their minds. The connection feels the same if you would’ve met in person, it’s just without body language and physical touch to help you make that transition.”

A USI student said she was ghosted solely for the fact that she didn’t want to be a “booty call.”
The junior nursing major asked to remain anonymous because of the personal nature of what she shared.

She said she had just started talking with a guy on Tinder. After they exchanged Snapchat usernames, he sent her a blank picture saying, “come over” at 2 a.m.

“I told him I wasn’t coming over because I didn’t want to be a booty call…and he got really defensive and told me he just wanted to cuddle,” she said. “I told him that is what I think anytime someone tells me to come over at 2 a.m., and you’re not special in that.”

Immediately he unfriended her on Snapchat and unmatched on Tinder.

“I just think people think there are no repercussions because Tinder doesn’t show your last name and you really don’t know who that person is,” she said. “If you don’t post a lot of pictures that show your face well, you can be fairly anonymous, so if you decide to be done with a person you can immediately drop them.”

This is something she feels can be damaging to your self-esteem, because unlike in a normal break-up where you have someone tell the reasons for the breakup, the person just leaves.

“They just leave you there asking yourself ‘did they get disinterested? Is it something I did? Is it something about myself they didn’t like?’ There’s just no concrete answer,” she said. “You’re constantly guessing.”

Stephanie Young, associate professor of communication studies, said the problem with ghosting is because you aren’t sure of the motivation of the person.

“There’s no formal communication saying that this conversation has ended or this relationship has ended through social media,” she said. “I think that is when people get into a communication confusion.”

Young said ghosting isn’t new. It’s been happening for years, but it has a name now.

Before social media, she said, people would go on a first date, then a second date. Then the person never calls back again. It is still sending an implicit message.

“I think people are probably doing it more because I think social media and technology allows conversations with multiple people, there’s no investment in one person,” she said. “I can invest in talking with four different people at one time to determine if I’m romantically interested in them. I think it’s a little more difficult to judge four people in person.”

Young said Tinder can also play a role in ghosting when people view it as a sexual hookup app.
She said individuals will ask quick messages to find if they are compatible immediately and if not, will move on.

“I think we are seeing a shift in the rules about self-disclosure,” she said. “I think that self-disclosure is sharing personal information that someone else might not have gained on their own….If you share too much information and someone goes ‘oh no this definitely isn’t a relationship I want to be in,’ that can cause someone to not want to share personal info with anyone.”

This topic is something Young wishes people would be honest and direct with the person they are trying to break it off with, instead of “falling off the face of the earth.”

“Ghosting is indirect conversation that you’re supposed to figure out that they expect that person to figure out, but in some ways that takes the responsibility off of the person breaking up,” she said. “They feel they are going to feel bad telling someone it didn’t work out so they choose to say nothing at all. Which I think might be a little selfish.”

Young said she feels utilizing technology can be great to connect with others, but there is a dark side because you’re not talking face to face.

“I wonder if people may justify ghosting as an act of kindness,” Young said. “They aren’t saying it directly and that person has to just figure it out, but I think that might be opposite.”