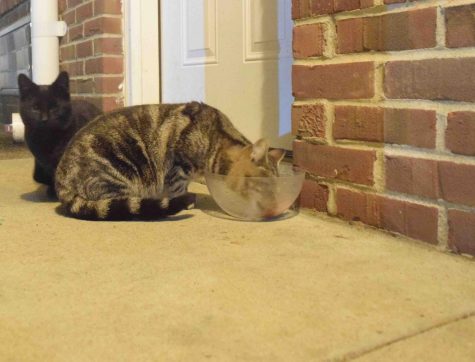 As students walk around campus, chances are they will notice stray cats.

In 2014, Audrey Maxwell decided the university needed a better way to deal with the feral cats on campus. Maxwell was a junior psychology major at the time and she became impassioned to help feral cats after finding two frozen to death outside her apartment.

Maxwell proposed TNR (trap, neuter, release) as an alternative to the current feral cat procedure. Maxwell proposed that feral cats would be neutered and taken care of on campus with shelters and food, while adoptable kittens would be taken to the local animal shelters.

Maxwell had spoken with Another Chance For Animals of Evansville, a network of foster homes and volunteers helping to save animals at Evansville Vanderburgh Animal Care and Control. Maxwell proposed her independently funded program to SGA (Student Government Association) and was approved. Maxwell’s proposal made it all the way to the president where it was finally shut down.

No alterations have been made to the university’s feral cat process since.

“I was so passionate about helping the cats,” Maxwell said. “It was one of the only things in my life that I was passionate about at the time. There is a lot to be gained by helping animals, not just for the animals, but for people as well.”

The Shield scheduled an interview with James Wolfe, the director of facility operations and planning, to talk about the current procedure for dealing with the feral cats. University Communications canceled the interview and provided a statement instead. The statement reads as follows:

“The University of Southern Indiana recognizes that feral cats have become part of our population to varying degrees over time. This issue is certainly not unique to our campus.  Like us, many have struggled to find a solution.

While we do not have the answer today, we would like to invite the USI community to come together around this problem to consider a solution for our campus. It is important to note that we do not allow pets on campus and we do not intend to change that policy.  Moreover, we know that the adult feral cats are largely not adoptable. Any answer will need to consider the time commitment, resources needed, potential partners and sustainability over time of the program.

We are concerned for the well-being of these cats and believe that the inherent innovation on this campus can lead to a viable solution.”

TNR is not a new process. According to bestfriends.org, the tactic was first created in the 1950s. The process of neutering and releasing the feral cats has proved successful across the board.

According to alleycat.org, programs have been successfully implemented on campuses across the nation for the past two decades, including Stanford University, Auburn University, the University of Central Florida in Orlando, Arizona State University, Texas A&M at College Station, North Carolina State, and many more.

Simply capturing and euthanizing the cats does not solve the problem, as new colonies of feral cats replace the ones who had been removed. By neutering the feral cats, the colony is stabilized, and new colonies are kept away by the already fixed cats. Eventually, the colony depletes itself.

Maxwell had done her research. 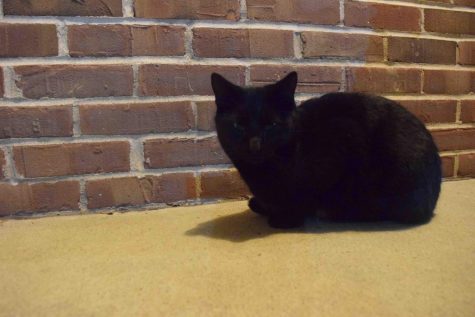 The nearly four-month process of creating and getting signatures for her petition, advocating, and educating students and staff on TNR proved to be fruitless. Defeated, Maxwell dropped out of school the following semester and moved to Phoenix, Arizona where she began working at Maricopa County Animal Care and Control as a customer service representative.

Despite Maxwell’s plan and procedure, the university turned down the program because it feared cost, sustainability, increasing the cat population and harming the bird population.

“They were legitimate concerns to have,” Maxwell said. “I just wanted to find the best way to help. It’s unethical to leave cats outside without proper care and claim it’s working. The university has been doing the same thing for years and there has been no change.”

Maxwell also said that most of the universities fears have been proven to be false or of little concern.

“One of the biggest arguments against TNR is the harm it might do to the bird populations,” Maxwell said. “But the birds are being killed by the feral cats anyway. With my proposal, the shelters and food would have kept the cats away from the birds as much as possible.”

Audrey Jullian, a board member for Another Chance for Animals, said she wasn’t surprised but was disappointed by the University’s decision.

“The university sees the cats as a nuisance animal that needs to be gotten rid of,” Jullian said. “But I think they are slowly realizing that trapping and getting rid of the cats doesn’t solve the issue.”

Jullian said she was the one who advised Maxwell not to ask the university for any funds for the program.

“(Maxwell) didn’t need any assistance other than allowing her to trap the animals,” Jullian said.

Jullian said the goal is to have no more cats. A misconception with TNR is that it would add to the already prevalent feral cat issue, but this misconception has been debunked by many universities who have seen a substantial lowering of their feral cat populations after implementing TNR.

“At the time (Maxwell) was fighting for this, I was very vocal about TNR,” Jullian said. “I believe (the university) will eventually accept this but I don’t know what kind of evidence they need to see before that will happen.”

Kindra Strupp, associate vice president for marketing and communications, said as far as she’s aware, the university is not capturing any cats right now. Strupp said it is the duty of the community to report feral animals to the local animal shelters to be taken care of and removed.

“I am not sure what is done with them after they are removed from campus,” Strupp said.

Strupp said that if any student comes before the university with a proposal such as Maxwell’s that they would receive a hearing.

“The university would certainly listen and hear what students have to say,” Strupp said. “But I do not know what the outcome of that would be.”

“I wasn’t very involved on campus,” Maxwell said. “If I had a larger group demanding the same thing it would have been different. If anything is going to change it needs to be vocal and it needs to be public and many people need to be fighting for it. Right now, with the change in presidency, it is the perfect time to try and fight for this again”