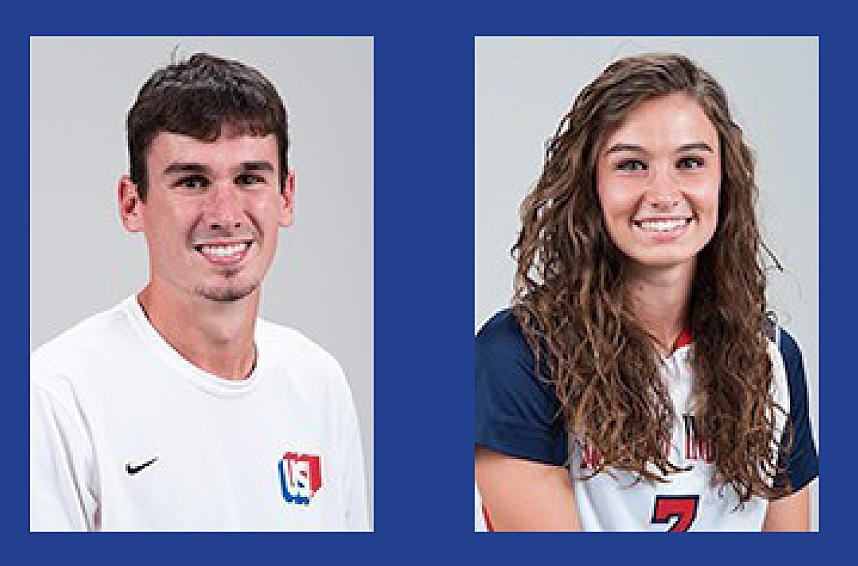 USI soccer players Miles and McKinsey Durham share many similarities, but they don’t talk to each other much about the game they play.

Oftentimes, they have the opportunity to watch each other play since many of their games are on the same night and location. But rarely, if ever, do they critique each other afterwards.

“We probably have a different relationship from other siblings that play sports,” said senior midfielder and exercise science major Miles Durham. “We invest so much time into this game, and we’re both hard enough on ourselves as it is, that we’d rather talk about something besides soccer.”

Both were first-team All-State soccer players at Madisonville-North Hopkins (Ky.) High School, and have earned academic honors at USI as they pursue careers working in athletics.

But their personalities are actually quite different. Miles is more reserved and a listener like his mother, Starr, whereas McKinsey is more talkative and outgoing like her father, Stephen.

“If Miles were elected President of the United States, I wouldn’t know it until he was giving his induction speech,” Starr Durham said  jokingly.

For McKinsey, having her brother nearby has been a huge factor in easing into life as an adult. Though she committed to the program before Miles, despite being two years younger.

Before coming to USI, Miles was only a student at Western Kentucky, deciding to focus on academics. But he missed the sport, and transferred to USI while McKinsey was a senior in high school.

“It was just relieving to know Miles was going to be here, and that I wasn’t going to have to do it alone,” said sophomore defender and kinesiology major McKinsey Durham. “I know he’d do anything for me when I need it.”

Being just 45 minutes away from Madisonville has allowed Miles and McKinsey the opportunity to adjust to being on their own, while also being close to family.

Their parents, who run their own businesses and have the flexibility to create their own schedules, have not missed one of their games.

“We were thrilled that they ended up at the same place,” Starr said. “We’ve just been very happy with the USI program, education-wise. And they seem to be very happy playing soccer. If they’re happy, we’re happy.”