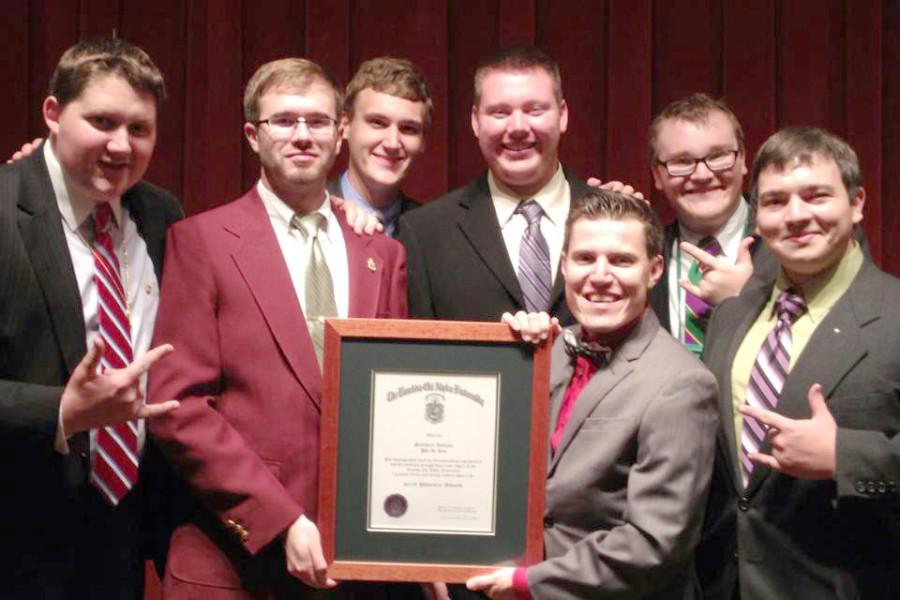 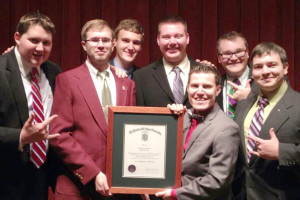 Davidson said the general fraternity is very strict about what kind of men are allowed to become Lambda Chis. So when representatives visited USI during the 2009-2010 academic year, they kicked out all of the officers, appointed a new president and told him to expel every brother who wasn’t living up to the fraternity’s values.

“When it was all said and done, we were down to eight members,” Davidson said. “It’s been very rocky since then.”

Davidson became a brother in the fall of 2011 alongside 24 other members.

Eleven members remained in the summer of 2012, which is when Davidson took office.

But this summer, things changed.

The Phoenix is presented to a chapter that has made unusually positive strides in overall chapter operations for three consecutive years, including improved membership size, depth of programming and risk-free operations. It isn’t applied for – leadership consultants who visit the 197 chapters sprawling the United States and Canada nominate select few chapters for the award.

“Lambda Chi Alpha has always been good at talking the talk,” Davidson said. “We thought that winning competitions and being social was what it meant to be in a fraternity, and it wasn’t. We had to live by our values.”

“Plain and simple, we had to throw tradition out the window,” Davidson said. “A lot of chapter traditions are what got us into the bind that we were in.”

He said he lives by a quote from former Senator Paul Wellstone: “Never separate the life you live from the words you speak.”

He wants his brothers to do the same.

“When we recruit somebody, we have to see Lambda Chi in them,” Davidson said. “We don’t recruit anybody and turn them into Lambda Chis.”

Lambda Chi Alpha looks for diversity and men who can respect anyone from any background and any lifestyle, he said.

“We don’t have two brothers who are alike. I venture to say that we don’t even have two people who have the same views on even one thing,” Davidson said. “We care a lot about brotherhood and we care a lot about service. We look for people who do a lot of volunteering, but not just volunteering – philanthropy for the sake of helping others and not for the sake of getting recognized.”

Student Development Program Adviser David Stetter said Lambda Chi Alpha winning the Phoenix is a sign that USI’s Greek Life community is doing the right thing and the national organizations are starting to realize it.

“When you come from a Division II school that isn’t a 150-men chapter like you see at the Purdue’s of the world or the IU’s of the world, it’s hard to get recognized,” he said.

Stetter attended the Stead Leadership Seminar as well. But he had his own award to win – 2013 Greek Adviser of the Year.

“I had no clue I was even in consideration,” he said.

Stetter was also nominated for the award by the leadership consultants who visited campus.

“It is my proudest moment thus far on a personal level,” he said. “It’s one of those awards you can only win once as an adviser, but it’s also one of those awards that five, 10 or 15 years down the road is still going to be an honor. I’m not a Lambda Chi but they still recognize non-members for their achievements, and I think that is such a unique thing about their national headquarters.”

Stetter gave a seven-minute speech about mentorship during the Seminar, which can be seen here: http://youtu.be/gqPlvqoXzks

“He doesn’t get nearly the recognition he deserves,” Davidson said about Stetter. “I consider him a close friend, someone that I look up to.”

The USI chapter was also awarded the Outstanding Academic Achievement Award for its combined 3.1 GPA.

The fraternity is planning to celebrate its 30th anniversary next year.