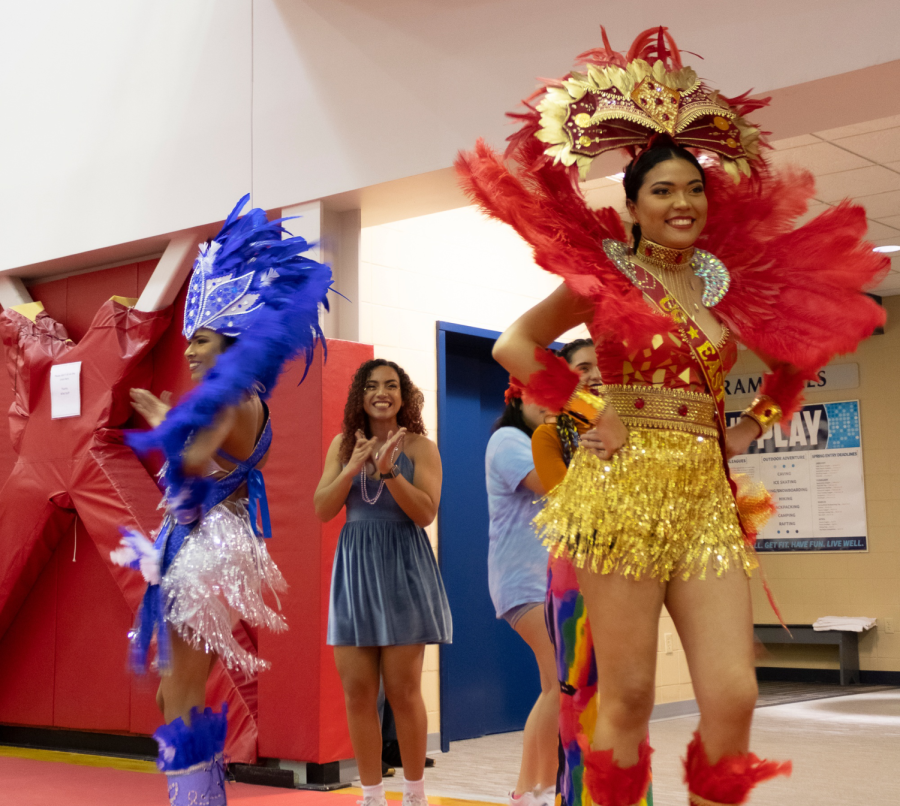 “Tonight is the night we have been waiting for decades,” said Yafeth Gonzalez, freshman economics major.

The carnival was a representation of Panamanian culture by including the queen dance competition between the women and incorporating bright colors and loud music.

Xenia Adames, president of PANAS and senior mechanical engineering major, said that women competing over beauty is part of the cultural tradition in Panama. “It just really speaks to who we are,” she said. “That’s why we have bright colors and feathers, and it’s so much fun. It’s part of the culture. We’re just so joyful.”

“I’m very excited that this was the first time that we actually did the carnival here because it’s a huge part of the Panamanian culture,” said Hilda Magallon, the queen representing UC West and junior mechanical engineer major. “You have to participate to get integrated into the culture.”

The competition between the queens is not meant to have a winner. It is meant for the women to show off their beauty in bright costumes.

The carnival included students and other members of PANAS choosing a queen to side with, engaging in “trash-talk” to the opposing side and a dance-off as another part of the beauty competition tradition.

“This is the biggest celebration that we have in the country of Panama,” said Yoel Alvarez, freshman psychology major. “You can see we have queens. We have a lot of people who dance with them. They fight who is the best with the viewers. So we try to bring that to USI, so the people can really understand what we celebrate.”

Eric Espino, sophomore civil engineering major, said, “It’s a really huge tradition back home because people save money throughout the year just to spend on fireworks.”

The event was originally scheduled to be held on April 6 in the Quad but was delayed and moved to April 13 in the Recreational Center due to poor weather. Dax Kahre, freshman finance major, said that he was impressed with the turnout considering the delay.

“It’s going great, honestly,” Kahre said. “I didn’t expect this many people to show up because it’s in the (Recreational Center) now. Everyone seems to be having a great time.”

Members of PANAS said they wanted campus students to feel like they belonged in the carnival as well.

“We want to show all of the non-Panamanians that Panama is a country with close quarters, but we also are really inclusive, so you don’t have to be a Panamanian to be part of the PANAS.” said Hugo Chavez, freshman biochemistry major.

“We celebrate the carnival as you guys celebrate the Mardi Gras. We wanted to show the people at USI and the international students here that we also have fun during the Mardi in a different way. So we wanted to show how our culture shares that event of Carnivals,” Moreno said. “I think that’s the point, like sharing and realizing that we all have different ways to celebrate.”