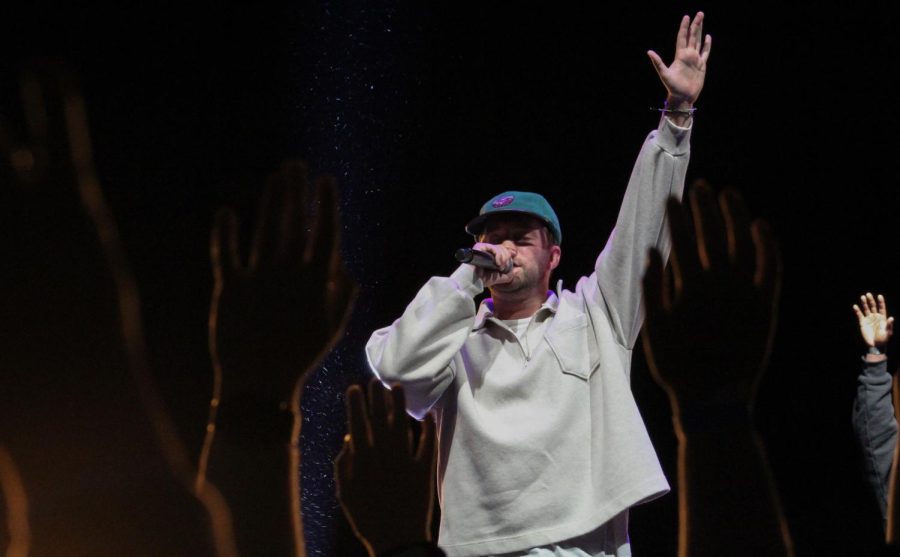 While the crowd was small, Krigaré and Kid Quill’s stage presence was enough to make over a hundred students shake the stage they performed on.

Krigaré and Kid Quill performed live at the Screaming Eagles Arena Friday night as a part of SpringFest 2022. The concert was free for all students. It was the first event to bring an outside artist to the campus since SpringFest 2016, when country singer Emily Earle performed.

I had listened to very little of their material before going to the concert. Krigaré’s music is a blend of pop, electronic and alternative rock. She performed live with a guitarist and drummer. Kid Quill performed hip-hop and rap live with DJ Oreo.

Crowd attendance was really low. At most, two hundred people were in the arena watching the concert. Students were either standing on the floor or sitting in the stands. For a free concert on a college campus, student attendance was pretty low.

It was a shame that there were not more students present because the artists nailed a fun, two-hour concert.

Krigaré started the concert with a cover of “Ain’t it Fun” by Paramore. She went back and forth between performing covers and original music. In her setlist, there were about two covers for every original song. It was a great way to connect the audience and the artist.

The instrumentation was simple but very thick and resonant. Each hit of the snare rang across the room, every deep bass note could be felt in my chest and the guitar was the right balance between lead and rhythm which kept the audience on their feet.

Krigaré’s vocals were excellent. Her normal singing sounded natural and her high notes had no breaks or cracks to be heard. She gave every song the effort the live setting deserved.

The best part of her performance was the artist-to-audience interactions. She joked a lot with the audience, shouted out various individual viewers and gave energy to the crowd, thus receiving more energy in return. The interactions were much more personal with the low attendance than they would have been with a larger crowd.

The exact same could be said about Kid Quill’s performance.

The DJ provided all of the instrumentation, creating a lot of fun moments. The samples and segments of other songs that the audience recognized created more engagement while Kid Quill performed.

As much as the small crowd allowed for these unforgettable moments, I can’t help but think how much more energy there could have been in the arena that night if more people were there.

The concert was free and open to all campus students, but not many students showed up. Maybe it was the weather, the lack of advertising or SpringFest being another let down with all the major events being moved to next week that affected the concert’s attendance.

Live music, big or small, will always be entertaining in some way. Even with lesser-known artists and a small crowd, this show was one of the more entertaining concerts I have been to. I do wish more students would have come because live music is best experienced with people.

SpringFest may rotate the event schedule every year, but the one aspect that needs to be a staple is the live music. I had a really fun time at this concert. I suggest checking out Krigaré and Kid Quill’s other concerts if you’re able.

I hope that despite the turnout, USI will continue to hold live concerts during SpringFests.