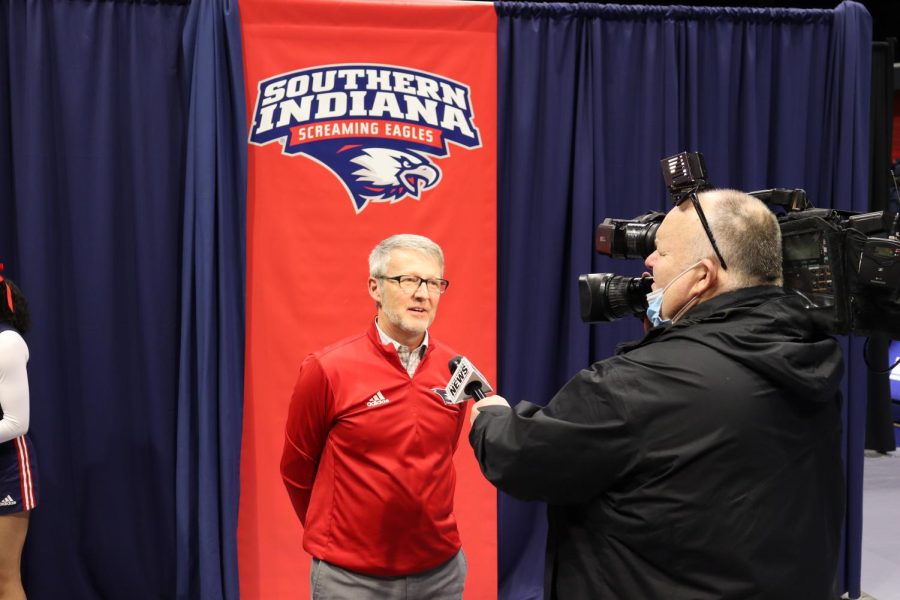 USI announced the transition to Division I on Feb. 7 and found its Division I home within the Ohio Valley Conference on Feb. 9. Where does USI go from here?

Faculty and staff have been working on a strategic plan to transition campus to DI for the next four years which is required to be submitted to the NCAA by June 1.

According to Jon Mark Hall, athletic director and overseer to the transition, university faculty and administrators now have to condense the exploratory committee’s internal report alongside the information, procedures and processes provided by the NCAA to create the strategic plan.

The plan is subject to change depending on how fast or slow campus programs develop over the course of the transition. Hall said the transition gap may be shortened along with other schools but had nothing more to comment on this possibility at this time.

“I don’t think our expectation level has changed,” Wildeman said. “We’ll be able to provide the students with more support staff and not be stretched thin.”

Alongside the campus during this transition will be the PICTOR group, a consulting firm hired by USI which assists intercollegiate athletic programs, conferences and sports organizations with a variety of issues.

The PICTOR group working with USI is made up of two members who formerly worked in DI: Carolyn Schlie Femovich, former executive director of the Patriot League for 16 years and vice president of the PICTOR group, and Cary Groth, former athletics director for the University of Nevada and Northern Illinois and co-founder and CEO of the PICTOR group. The PICTOR group will provide a critical outsider view on what the campus needs for the OVC and DI.

“We’re the consultants, not the decision makers,” Femovich said. “Dr. Ronald Rochon, Chairman (Ronald) Romaine, and Jon Mark Hall have been phenomenal and wonderful in the partnership.”

The PICTOR group recently released their assessment report of USI and the feasibility of the transition, and they have also helped USI network by making calls about the sports programs missing a conference.

“Division I will be aspirational for the university,” said Femovich. “I think USI has a great foundation, support for the program and in the community.”

The athletic schedule will slowly be switching over to DI competition as well. As of now, swimming and diving and men’s soccer have to find DI homes since the OVC does not offer those sports within their conference.

“I do think the first year or two, it’ll be difficult to find home games just because we’re new and other colleges already have things scheduled out,” Hall said.

“Our mindset hasn’t changed. We’re ready for the next step,“ said Stan Gouard, men’s basketball head coach. “We’re excited because we get to play at a higher level. Change is good and we’re all ready for the change.”

Hall said he hopes there will be support for the transition.

“I hope it helps everybody on campus,” Hall said  “I know there are some tough feelings now. I’m hoping as this transition happens over time, it’ll benefit everyone.”