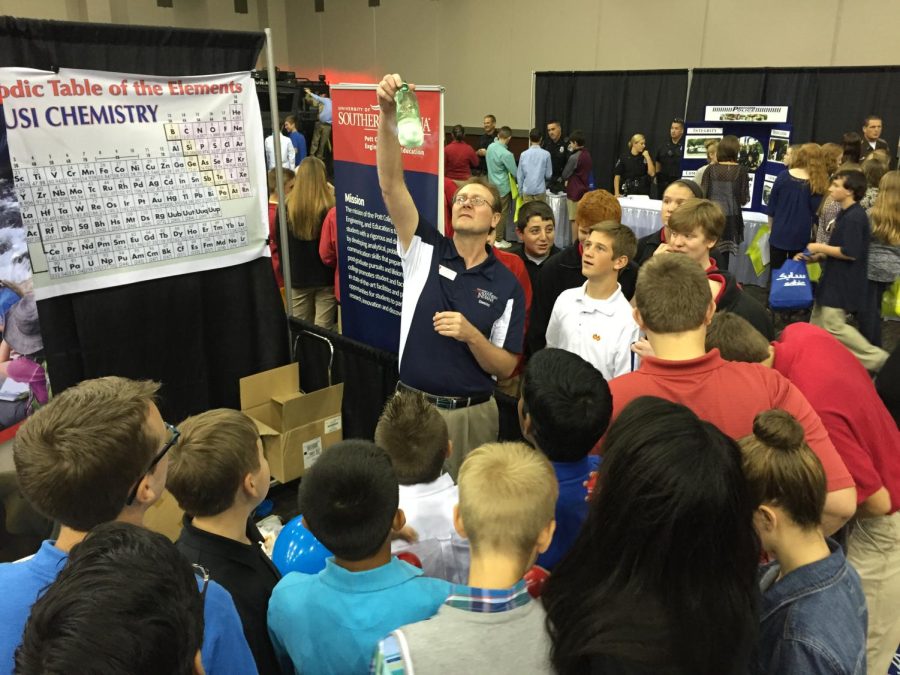 Jeffery "Jeff" Seyler, professor of chemistry, demonstrates a chemical reaction to local students as part of a tabling event. Seyler passed away Dec. 16, 2021, on campus.

Students, faculty and staff return to campus for the Spring 2022 semester remembering their beloved professor, coworker and friend who passed away the day before the last day of Fall 2021 classes.

Jeffery “Jeff” Seyler, professor of chemistry and former chair of the Chemistry Department, passed away on campus Dec. 16, 2021. Seyler, 58, of Evansville, Ind., died from complications of atherosclerotic cardiovascular disease, according to Steven Lockyear, Vanderburgh County coroner.

Kenneth Walsh, succeeding chair of the Chemistry Department, said, “He had a role in everyone’s success in the department.”

Walsh and Seyler worked together for around 16 years. He said not only was Seyler an excellent mentor for him, but he was a mentor to everyone in the Chemistry Department, hundreds of students and junior faculty from other departments.

“I think one of the things that Jeff was very well known for amongst his colleagues was never giving up on a student who was struggling,” Walsh said. “He always gave students a chance to prove their abilities even after maybe some of the rest of us had decided that that person had enough chances.”

Anmol Singh, a junior biochemistry major, worked on research with Seyler since his sophomore year, including Summer 2021. Not only did he get to know Seyler as a professor, but also as a friend and someone he could talk to.

Singh said Seyler helped increase his confidence in chemistry. Seyler always believed in Singh’s ability even when Singh didn’t quite believe in his own.

One day, Seyler was lecturing Singh in research about how molecular orbital theory applied to the organic and inorganic compounds they were making. Seyler was passionate about this topic, and he really wanted his research students to understand it.

His voice got loud, but Singh said it was not in anger, but in passion for the subject and his students. Singh said after the lecture, he felt drained because he was having a difficult time with the subject.

The next time Singh walked into Seyler’s lab for his research session, Seyler had a new laminated little poster with something “along the lines of, ‘If I’m loud, it’s because I’m passionate about your education and your future,’” Singh said.

Seyler pointed the poster out to Singh and was like “Do you see that?” Singh said Seyler told him the sign hadn’t been up there long, and he wanted to make sure Singh didn’t think he was mad at him. Singh started laughing and said “‘Oh, that’s a really sweet thing.’”

Seyler later told Singh that he put the sign up to encourage him and his research partner.

“I think through that little poster he put up, it really just shows what kind of character he was,”  Singh said. “He’s really passionate and self-driven, and he puts that on his students, and, I’m sure, the people who were close to him.”

At Seyler’s funeral, Singh said there was a little picture of the poster that touched Singh.

Seyler often told his students if he was yelling, it wasn’t because he was mad. He was just passionate about chemistry and teaching undergraduate students.

Seyler combined his passion for chemistry research with his love for students and was a big advocate for student research. He worked with many students over the years on research and was the advisor of the American Chemical Society chapter at the university.

Mohit Manchella, a junior biochemistry major, got to know Seyler working with him on research and as the president of ACS.

“For me personally, he was one of the most pivotal people in terms of building my passion for chemistry and for ACS,” Manchella said. “Just seeing him interact with the community and trying his best to expose as many people as possible to chemistry and science in general was really fun and inspirational to watch.”

Manchella said besides being passionate, another hallmark of Seyler’s personality was being generous with his time.

Seyler was awarded the 2018 M. Edward Jones Engagement Award for the relationships he built on campus and in the community. He was involved with campus outreach soon after arriving at the university in 1993.

He organized campus events like “Mole Day” and “Earth Day,” chemistry competitions for high school students. He helped with local science fairs for students of all ages.

Seyler led demonstrations as the advisor of ACS to help Boy and Girl Scouts earn their chemistry merit badges. He also did his exciting chemistry demonstrations on campus as often as he could.

His chemistry demonstrations that sent trash can lids to the ceiling tiles, created large sounds and flashes of lights are popular memories of Seyler’s impact on campus and inspiring youth to pursue science.

Zane Mitchell, dean of the Pott College of Science, Education and Engineering, said watching Seyler do his demonstrations was his favorite memory of Seyler.

Mitchell said Seyler’s impact on the Pott College was “all positive.”

Seyler worked with Rex Strange, assistant professor of biology, in the Pott College.

“He was positive, and he’s a really nice person in meetings and stuff,” Strange said. “He really enjoyed being with students.”

Seyler was known for his positive personality. Students and staff on campus can’t recall seeing him frustrated. He enjoyed what he did and spending time with the people in his life.

In addition to spending time with students, he enjoyed being outdoors and in his boat with his friends and family. He was heavily involved with his children’s lives by attending band concerts and coaching teams.

Seyler cared deeply about his family, friends, students, colleagues and chemistry. His impact will never be forgotten.

Former students alongside coworkers and friends shared their appreciation to Seyler on the Chemistry Department’s social media announcement of his death.

The Chemistry Department announced Seyler’s death on Dec. 18, 2021, after President Ronald Rochon announced the death of a faculty member Dec. 17, 2021.

Emily Kraft, a former student, commented on the announcement “Dr. Seyler mentored me in high school on my science fair project. After working in his lab, I decided to come to USI and major in chemistry. Many great memories including our class trip to ACS in New Orleans.”

“I am forever grateful that he believed in me more than I did myself,” Kara Schotter, a former adjunct professor in the Chemistry Department, commented on the announcement. “I am not sure I would have continued being a teacher if it was not for his encouragement.”

“I will always remember his friendly smile and the twinkle in his eyes as he explained things like equilibrium and redox reactions, and the delight he took in blowing things up or demonstrating all the fun one can have with dry ice,” Kristen Toone, a former student, wrote on the digital wall. “His contributions to the careers and chemistry understanding of many students – college and youth- will leave a lasting legacy.”

“Jeff was a special man,” Marsha Segebarth, contract assistant professor emerita of biology, wrote on the digital wall. “I never passed him in the halls of USI when he was not smiling.”

Manchella said walking past Seyler’s lab now reminds him of all the good times they had and of his loving personality.

“He was just excited to be there, and his excitement translated into my excitement for being at USI, being a chemistry student under his guidance,” Manchella said. “He will definitely be truly missed.”