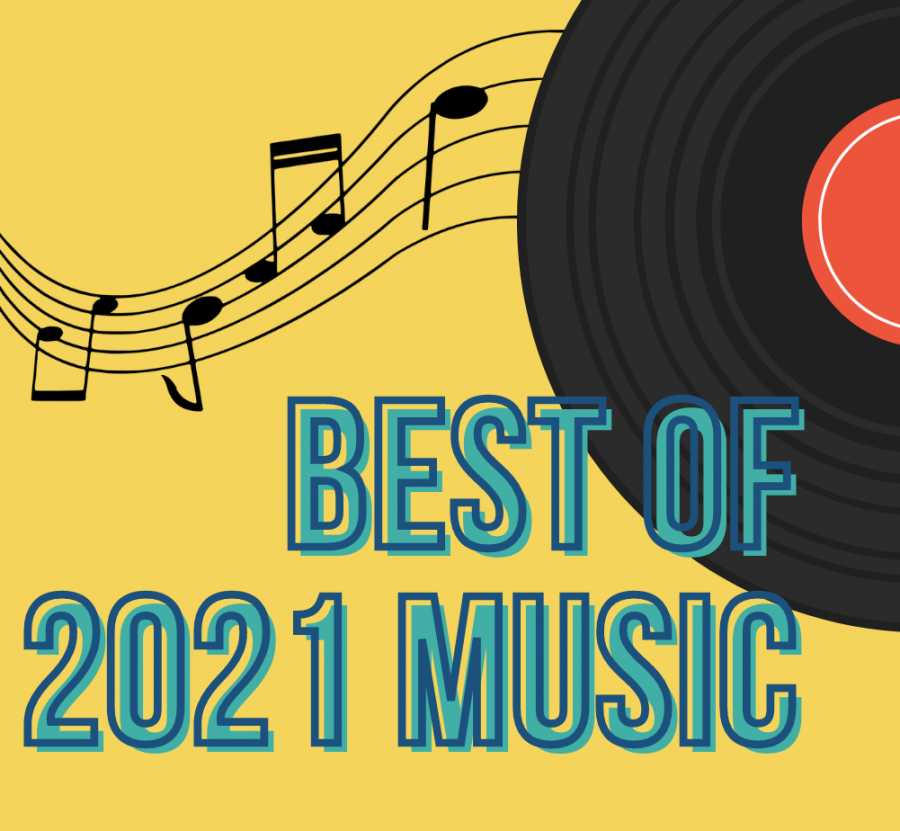 2021 was an excellent year for music. I feel that this was one of the rare years that every genre got a major release with some quality.

Out of all of this quality, I have chosen ten of my favorite albums across all genres. Whether you are wanting chill music to study to or heavy metal to thrash to, I have it covered within these albums.

“Fortitude” is a raw, tribal metal album through and through.

This album sees Gojira continuing into the alternative and groove metal genres while still retaining their technical, death metal roots. It has a very similar sound to their 2016 record “Magma” with chugging riffs from Joe Duplantier and Christian Andreu, thick background bass from Jean-Michel Labadie and uncompromising, extreme performance on drumming by Mario Duplantier.

What separates this record from “Magma” are the lyrics and musical themes. This record emphasizes the uncertainties of the chaotic world around us and trying to make the best of it. A big example would be the track “Amazonia,” which revolves around the deforestation and wildfires of the Amazon rainforest. Joe Duplantier is able to put on a vocal performance that expresses the tragedy of losing one the planet’s greatest miracles over greed and mismanagement.

Meanwhile, the instrumentation presents a very heavy atmosphere to match the anger of the vocals. The chugging guitar riffs and drums being the main background of the main bass riff really makes the track feel tribal, which fits in well with the message the song has and the rest of the album does really well.

My favorite tracks are “Born For One Thing,” “Amazonia” and “Grind.”

“30” is a very simple, yet personal and beautiful expression of moving on.

Adele is one of the greatest vocalists living today, there is no denying that. While the instrumentation takes more of a backseat on this record, it brings out Adele’s vocals and lyrics so much more. While “30” is not a concept album in a traditional way, all of the songs contribute themes of sorrow and loss regarding Adele’s divorce.

The single “Easy On Me” is a simple song instrumentally, but is elegant, beautiful and emotionally intense. Adele’s vocals as well as piano take center stage as the lyrics describe genuine anguish and regret over how things turned out over her relationship, and it never comes across as cluttered or hard to read.

What I love the most about this album is that Adele’s words never really come off as angry or bitter towards her ex-husband, more so disappointed and hurt over how things turned out. “30” is a classy and emotionally driven record from one of the most moving voices living today.

My favorite tracks are “Easy On Me,” “My Little Love” and “Love Is A Game.”

Everything that makes this album good is out on the surface and always in the forefront. Yola’s singing is very versatile and all of the genres she incorporates work really well.  The chorus on each song are rich and match well with each song, and the instrumentations are glamorous and deeply rooted in soul and country.

Each song stands pretty well on its own, but all have the theme of overcoming adversity in different ways. The title track “Stand For Myself”  is about beating the odds of the music industry and being successful in a genre that really does not favor Black women. This theme is intensified with the country and rock instrumentation building up and triumphing with the main chorus.

This is a hard record to dislike. It really is a solid record all around and one of the easier records placed on this list.

My favorite tracks are “Barely Alive,” “Great Divide” and “Stand For Myself.”

“Promises” is a beautiful and meditative experience presented through jazz and classical music.

“Promises” is one musical piece that goes through nine movements over 46 minutes. It essentially moves through the same cycle of chords and ideas that are broken up between each movement. For example, “Movement 4” brings in the orchestra to slow down the piece and slowly transitions to Sander’s saxophone to push the album forward into the next movement.

This album really is the ultimate meditative music. You put it on while doing some work and those 46 minutes are gone.

This beautiful album never seems to overstay its welcome and deserves to be listened to in its entirety.

Kanye West knows how to bring artists together on projects, and this one has a beefy catalog of over 30 artists to combine elements of hip-hop, progressive rap and gospel music to discuss West’s perception of himself, Christianity and his mother’s impact on his life.

The title track “Donda” really nails this point home with West and interviews of his mother going back and forth discussing West’s music and more importantly, his public perception. It really is a track that humanizes someone who has had so much controversy in public perception.

Beyond this perception, “Donda” is an excellent hip-hop record that prioritizes its lyrics above all and greatly succeeds. Out of all of the hip-hop records to come out this year, this is the one I have come back to the most.

My favorite tracks are “Hurricane,” “Donda” and “Jesus Lord.”

5. “The Turning Wheel” by Spellling

“The Turning Wheel” has some of the best instrumentation of any album this year.

I think the lyrics and the vocals are really good on their own right, but the main reason I love this album are the excellent instrumentations Spellling uses in every track. This is a progressive pop album with elements of jazz, R&B, soul and rock, yet it all flows together incredibly well.

The opening track “Little Deer” is such a simple yet enchanting track that sets up the tone for the rest of the album. With a prominent piano beat and an orchestra in the background it is just wall-to-wall enchantment. One of the best openers to any album this year.

I love this album for the same reason I love “Promises.” It’s just a meditative experience on every track, and it earns its 57 minute runtime.

My favorite tracks are “Little Deer,” “Turning Wheel” and “Boys At School.”

4. “Forever In Your Heart” by Black Dresses.

“Forever In Your Heart” is an uncompromising, aggressive punk rock album.

Metal records wish they went this hard. All 15 tracks on this album push Ada Rook’s and Devi McCallion’s versatility and harshness to new heights. The sonic expansion of sound brought me in, only to jump out of my seat at roaring distortions and searing screams. The sounds hooked me as they caused me to pay attention to the lyrics lamenting the twisted world and the personal demons they have faced within the past year.

The track “PEACESIGN!!!!!” really highlights with chugging guitars and glitchy ambiance, and the harsh vocals sell the duo’s feelings and moods during the production of the record. This is only enforced when looking at the lyrics that ask questions of being able to make beautiful art for an ugly world.

If I were to describe this album the best, it is controlled chaos. The instrumentations and vocals do an excellent job staying on the line of keeping it contained and going over the edge.

My favorite tracks on this album are “PEACESIGN!!!!!,” “Concrete Bubble” and “Understanding.”

3. “Happier Than Ever” by Billie Eilish

“Happier Than Ever” is a beautiful pop record that expresses themes of maturity and sexuality.

Musically, there are a lot of similar themes to Eilish’s last album “When We Fall Asleep, Where Do We Go?,” with simple but heavy bass beats and acoustic sections, but there have been additions on top of this sound. Similar to the lyrics’ themes of maturity, the instrumentation has matured as well with the bass and acoustic sections being tighter and coherent.

The best example would be the title track “Happier Than Ever.” It starts off as a typical Eilish song would, with lofi bass and acoustic strumming, but it continues to build as Eilish’s vocal performance intensifies and finally climaxes with rock instrumentation and chorus. It really is an excellent progression, and I would even say it is one of the best singles released this year.

Overall, this is the pop record that continues to bring me back again and again due to its distinction from the rest of the mainstream. Eilish’s shows she is one of the best pop artists living today.

My favorite songs are “Lost Cause,” “Your Power” and “Happier Than Ever.”

2. “Colors II” by Between The Buried And Me

“Colors II” is a metal record that shows metal is not limited by how heavy it is.

“Colors II” is a sequel to the 2007 progressive metal record of the same name, and it was made with the same mindset. While this is not a concept album, all of the songs share a  theme of finding purpose and meaning in the modern world through music. This is the most musically diverse album I have listened to this year.

The lyrics work alongside these massive musical changes, talking about struggling with finding a proper place to feel any real meaning in life and continuing this cycle over and over again.

My favorite songs are “The Double Helix of Extinction,” “Revolution In Limbo” and “Human Is Hell.”

1. “Sinner Get Ready” by Lingua Ignota

“Sinner Get Ready” is both a horrifying and beautiful record that balances spiritual transcendence with religion and the finitism plaguing its past.

Throughout this album there is a duality presented with feelings of extreme devotion to religion and faith to feelings of disgust and distress. The madness of these extremes is exactly what the lyrical composition consists of throughout the entire album, and this duality is only heightened by the instrumentation.

The instrumentation and vocals go from unsettling but beautiful to horrific and bombastic. The contrast between the sophisticated, haunting layers of vocals and piano over top of the discordance of the other instruments is truly twisted.

I love it when music can make me uncomfortable, not only from lyrics and vocals, but from the instrumentation as well. “Sinner Get Ready” is my album of the year.