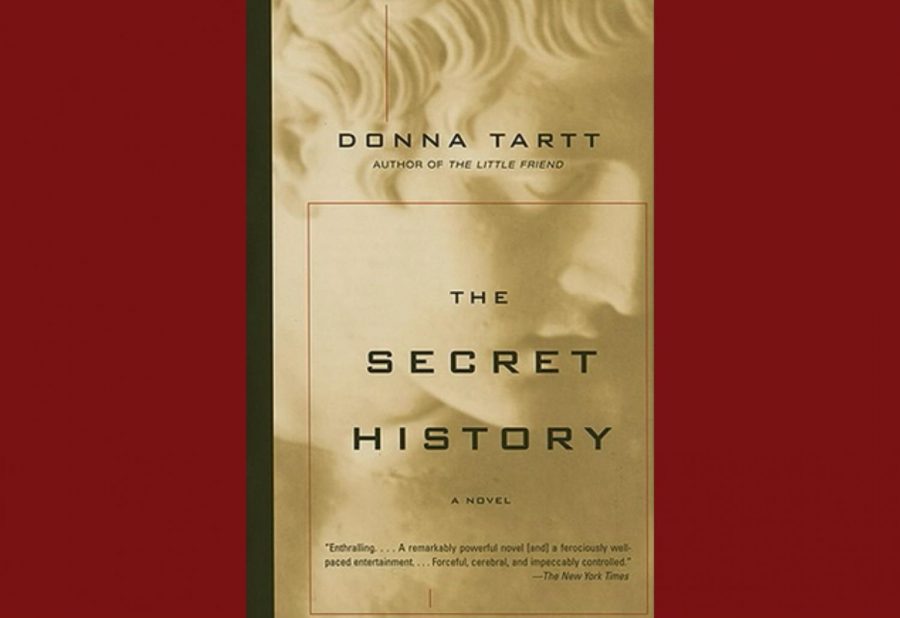 Cover art for “The Secret History” by Donna Tartt. The 1992 novel follows a group of friends who are attempting to cover up their murder.

There’s nothing like good, old-fashioned murder to bring your friend group closer together or tear it apart completely. At least, this seems to be the sentiment shared by the characters in Donna Tartt’s “The Secret History.”

Their friendly banter turns chilling when Henry unexpectedly but intentionally shoves Bunny over the side of the cliff.  He and the remaining four friends calmly make their way back down the incline and drive away.

The story then splits into a before and after. Part one takes the reader to the very beginning of Richard’s life to discover how the friend group came to be and the circumstances leading up to the murder. Part two begins immediately after the murder. The reader must suffer alongside the characters with the anticipation of not knowing what will come of their crime.

As nefarious plans are made and a body lies waiting to be discovered, the friend group grows closer with the secret shared between them and the twisted bond forged from it. The group finds, however, it isn’t easy trusting people capable of murder, and jealousy and distrust bubbles under the surface as time progresses.

I was drawn into this story initially by its thrilling plot, and the novel continued to give me reason after reason to keep reading.

I am most drawn to character- driven stories. A good plot matters, of course, and “The Secret History” certainly has one, but one of my favorite aspects of the book are the characters. They are eccentric and enigmatic with a wardrobe and attitude to match their wealthness, all with a strange obsession with the classics. None of them are black-and-white characters, but instead, they are morally gray with strengths and flaws, allowing for a love-hate relationship between them and the reader.

The perspective of this book was also extremely attractive to me. Richard, the narrator, is the newest addition to the friend group and an outsider to their lavish lifestyle. He is fascinated by them and eager to impress and please them. However, because of his late introduction to the group, he is exempt from many of the group’s secrets and tight bonds.

This creates an unreliable narrative as the characters keep Richard at arm’s length. His characterization of them is based on the personas they display for him, leaving the reader unsure of what kind of people the rest of the characters truly are. Due to this, when their facade slowly falls away, it is all the more satisfying and shocking for the reader.

I was worried the novel wouldn’t be very suspenseful or thrilling as the murder and the culprits were described in the first pages of the book. This actually ended up creating even greater intrigue and mystery. I waited to figure out how seemingly normal friends could do such a thing. I sat gnawing my fingernails waiting to see if they would be caught.

Donna Tartt, a Pulitzer prize winning novelist, writes beautifully. Her writing is certainly flowery but not unnecessarily so. Even the scenes with memories and descriptions that seem most irrelevant to the plot have something to do with the story or overall message.

She evokes emotion and has a way of getting the reader to somehow empathize with immoral characters. The book genuinely had me convinced, like the characters had convinced themselves, that murdering Bunny was necessary.

The atmosphere of the book was also right up my alley with the tropes and aesthetics of dark academia persistent throughout the entire book. Think “Dead Poet’s Society” but with Greek instead of poetry and, well, murder. The story does host a lot of dark topics and themes, so be aware of that if there is anything you can’t stomach reading about.

Overall, “The Secret History” had all one could ask for in a book, especially for thrill-seeking readers like me. Stunning prose, well-developed, intriguing characters, a fascinating plot and a gutting ending led me to give this book a five star review.

“The Secret History” is available at David L. Rice Library. If the genre, plot or tropes sound at all interesting to you, I highly encourage you to give it a read.