Give me buses or give me parking: It’s time to address the bus problem 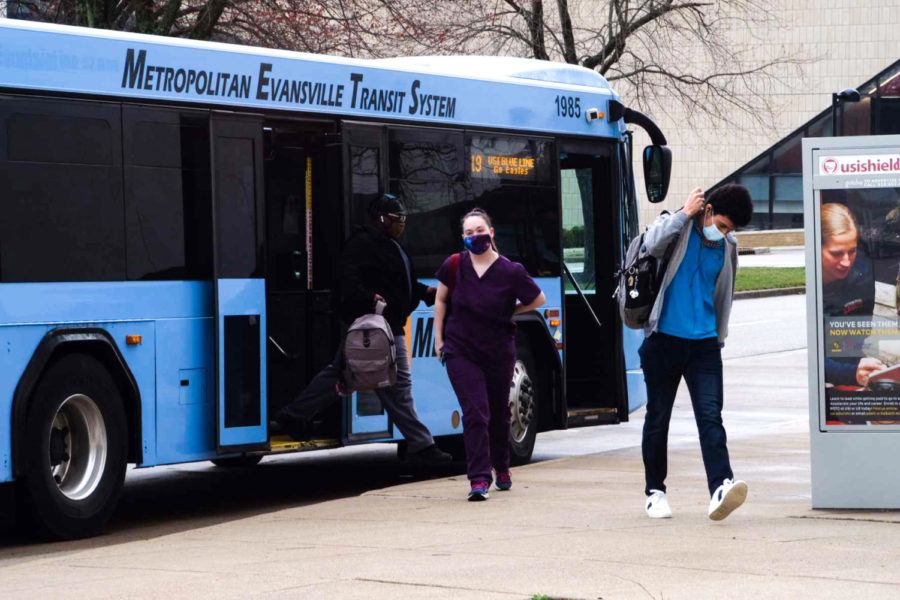 Students exit the Mets bus on their way to class, March 2021. Bus consistancey has been an issue with students for much longer than this semester.

9:15 a.m. You wake up early, get ready, make yourself breakfast and drink your morning coffee. It’s chilly, as any early November day would be, and the wind is biting at your exposed ears. Walking all the way to your class in this weather is something you dread.

As a student living on campus, you know that you can either take the bus or walk. You can’t drive to campus because you’re not allowed to park. You have 45 minutes before your first class at 10 a.m., meaning you might even have time to hit up the Sweet Spot or Starbucks before class. You find yourself at the nearest bus stop.

9:30 a.m. A bus approaches you. You gather your things, hoist your backpack back upon your shoulder and step towards the curb anticipating a stop. Then, like being blown away by a gust of wind, you watch the bus stop at the stop sign and continue onwards. The bus is full, and with a new no-standing rule, you’re left shivering in the cold for who knows how much longer. There goes your coffee.

9:40 a.m. Finally, a bus stops for you. You hop on, ride a stop or two and are told that you need to get off so the bus can be cleaned. Begrudgingly, you step off the bus at the C-Store and are stranded once more. You go inside.

9:50 a.m. Ten minutes left. You can make it, right? At this point, you weigh the pros and cons of just dealing with the weather and regret not stalking off to campus on your own earlier. You begin heading towards Housing and Residence Life, so you can take the path to campus through the trees. Just as soon as you turn to leave the building and are a good 30 steps down the path, a second bus approaches and has left the stop just as quickly as it came.

10:00 a.m. You finally caught the bus on its way back around the apartments. You’re cold, late for class and crammed into seats that are filled up to the brim.

I know I am not the only person fed up with the bus situation on campus.

I was around for the rise and fall of the three-bus system. I was here for the times when catching the bus in the morning wasn’t an issue because there was plenty of time. The bus schedules were consistent enough to not question whether or not you’ll make it to class leaving an hour early.

I’m personally a very detailed-oriented person. I like getting to classes early and being ready for the professor to begin teaching when they start. What drives me absolutely up a wall is, due to the university buses, it is more likely for me to be late than on time.

I’ve been stalled at the C-store and driven right past while either walking to the bus stop or while standing visibly at the spot in the dark. I know for a fact I’m not the only one who has this issue.

I’ve talked to students who have had to walk home in the dark due to drivers asking them to get off at least 20 minutes before the route ends. For one particular friend of mine whose apartment is in Greek life, it’s a 20 to 30-minute walk to her first class, and in this weather, that’s not always feasible.

Not to mention a new rule that was just announced by the driver on my ride to class Wednesday. Now, students are no longer allowed to have food or drink on the buses. If they do, according to this new rule, drivers will be asking students to get off the bus and walk. From what I understand, closed containers are alright. However, fountain drinks, fast food cups and more aren’t allowed.

So, there goes your morning coffee for a second time.

I’d like to give a shoutout to the individuals on campus who have bickered and barked with bus drivers when asked to raise their masks and refrain from eating and drinking on the bus. You’ve ruined it for the rest of us. Hope you’re happy with the choices you’ve made.

Personally, I have a few questions for the university.

First, why are students who live in apartments no longer able to park on campus?

If students are being kicked off the buses for food, how are you going to justify students walking to the university when temperatures eventually hit below freezing?

A lack of parking spots is not a valid answer as I see the open spots daily during my walk between classes, bus rides and even in class.

Parking tickets are handed out like university swag during Welcome Week, so I can only assume that Public Safety is simply making up for the lack of funds they received last year when parking on campus was allowed.

Second, why are students not allowed to stand on buses anymore?

I’m sure the main reason for this is safety during the COVID-19 pandemic. Protocols need to be followed for social distancing. However, with the tight schedules that buses put students on with routes ending at least 20 minutes early in some cases and cleaning of the buses occurring at the top of the hour and more, there needs to be another option. This leads me to my third question.

Whatever happened to the third bus?

You would think with limited seating, extended waits and cleanings the university would make up for these roadblocks in student schedules. The third bus on campus during the mornings and afternoons appears to be the most feasible option. Especially if the university will not allow the students to park, even though students pay for parking.

This isn’t an issue that the higher-ups here at the university have to deal with, so it’s understandable this isn’t on their radar. I mean you don’t see President Rochon hopping on the USI Shuttle to make it to meetings on time. Admittedly, if administration or staff were relying solely on the bus system as their means of transportation, then this would already be solved. They would realize what a big issue this is.

It is important to note my beef with the buses is not with the drivers. The drivers here at the university work hard to do the best they can within the circumstances they are provided. They are doing their jobs with a smile and a wave.

My issue lies in how the university is setting students up for failure with an inadequate system for students paying thousands of dollars to attend classes they can’t even get to on time.

Ask any student who regularly takes the bus about the bus, and they will probably have a complaint or two to share. The issue here is the university isn’t asking and isn’t listening to anything students have to say.

I am voicing my opinion. The campus bus system and parking need to be improved.

9:15 p.m. You’ve finally finished your day on campus. Now, you face a long walk back to your apartment through the trees, alone and in the dark.