“The French Dispatch:” A unique experience about a fictional newspaper 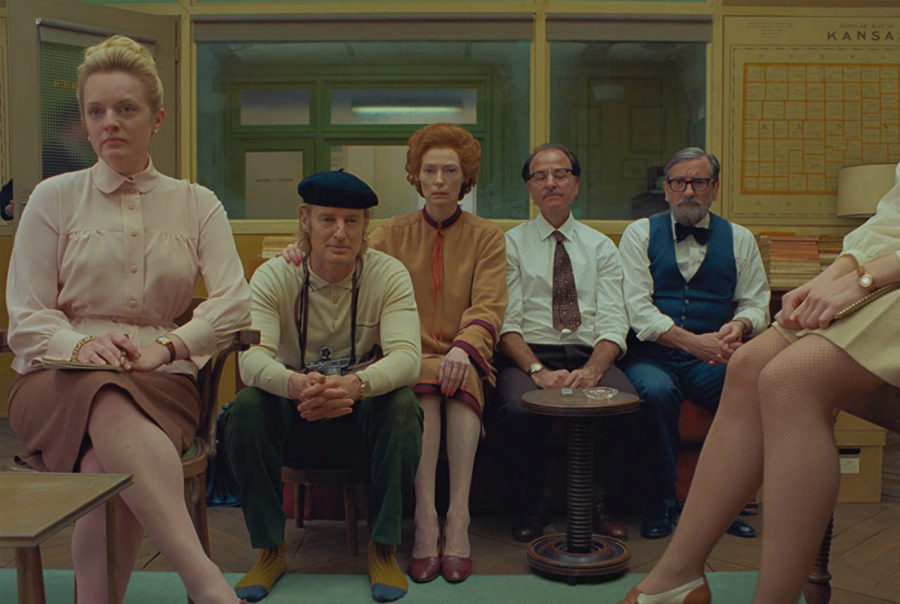 I have waited for over a year to watch “The French Dispatch,” eagerly anticipating how inspiring this film would be to me. After watching the film, I can honestly say I am not disappointed.

The French Dispatch is the name of an American newspaper originally from Kansas. When the newspaper’s founder and Editor-in-Chief Arthur Howitzer Jr. (Bill Murray) dies, the remaining journalists at the publication decide to dedicate the final issue to their beloved Editor-in-Chief.

The movie brings to life three of the major stories from the final issue: arts, politics and human interest and cuisine stories.

The first story follows Moses ( Benicio Del Toro), a psychopathic artist, who is ten years into his fifty-year prison sentence. When his fellow inmate Julien Cadazio (Adrien Brody) wants to buy his art, an unlikely friendship forms between the two. After Cadazio is released from prison, he promotes Moses’ artwork across France, making the incarcerated artist famous overnight.

The second story follows a revolt among students as boys from a local college protest that they should be let into the girl’s dormitory. The revolt is led by Zeffirelli (Timothée Chalamet), a bookworm who loves to play chess. As rubber bullets and tear gas continue to spread in the streets, Zeffirelli learns what it means to be a leader during a revolution and discovers his love for his fellow student Juliette (Lyna Khoudri) along the way..

The third story follows Roebuck Wright (Jeffrey Wright), a journalist for The French Dispatch, and his journey to the Commissaire’s (Mathieu Amalric) home to review a first-class meal from their prized chef Lieutenant Nescaffier (Steve Park). However, dinner goes off the rails when the Commissaire’s son, Gigi (Wensn Ait Hellal) is kidnapped by a local group of thugs. The group embarks on a chaotic journey to rescue Gigi, and Wright discovers the least likely thing would end up saving them all: food.

Personally, I loved this film.

I have to admit, however, I do have a bias towards this film. Wes Anderson is one of my favorite directors and has inspired me for years. The film did not completely live up to my expectations, however, I was not disappointed by the film either.

Like many Anderson films, the movie is executed in a unique way. All of his movies look the same. He uses the same actors most of the time, and all of the movements and dialogue in the film are directed in a very precise way.

The costumes and sets have their own unique staple. The soundtrack is never exciting, but it always brings out the feeling of the movie. Most importantly, the plot of the film is so out there only Wes Anderson can pull it off.

Not only did these journalists bring the stories to life, but they actually lived through the stories as well. J. K. L. Berensen (Tilda Swinton) was present to see Moses’ art. Lucinda Krementz (Frances McDormand) was on the front lines of the riots with Zeffirelli. Roebuck Wright was involved first hand with the hostage rescue mission of Gigi.

The journalists telling the stories from their perspectives gives them more of a personal touch, which helps explain why The French Dispatch is so important to them.

I love the change of color in each scene because it specifically distinguishes the stories from the past and the present. I thought this was a clever way to present the two time points while not being confusing.

The directing in “The French Dispatch” is very precise. Every time I watch a Wes Anderson film, I think all of the characters are being moved like dolls in a doll house.

Most of his characters are very monotone, but the mix of serious and witty dialogue blends so well that you forget there isn’t much emotion happening on screen. Every once in a while, the camera also randomly zooms in on a character’s face. I’m not sure why, but I think this adds a sense of characterization to the movie.

The costume and set designs are also very fitting for each scene of the movie. With the scenes in color, most of the characters’ costumes and sets were vibrantly colorful.

Arguably my favorite costume design in the movie is Tilda Swinton’s character wearing a long, flowing, bright orange dress with her ]red, borderline orange, hair. My favorite setting in the film would have to be Arthur Howitzer Jr.’s office with it’s bright yellow walls, which contrast his jarring character.

However, I think the best part of the movie was the ending when all of the journalists decided to write the obituary of Arthur Howitzer Jr. together. To me, this moment displays the impact the Editor-in-Chief had made on each of their lives. It was a sweet way to end the movie.

I enjoyed “The French Dispatch” with all my heart. The artistic style and original storylines from Wes Anderson have inspired my creative writing career for years now, and this movie continues to inspire my creative outlook on life.

Overall, I’d give this movie a 4 out of 5. “The French Dispatch” was not the outstanding, phenomenal, leave you speechless movie I expected it to be. I still loved it, nonetheless.

If you’re not a fan of experimental movies, I would not recommend this movie to you. However, if you like artsy indie films, I highly encourage you to watch this movie. Either way, I think everyone should consider watching this movie at least once to get the Wes Anderson experience.