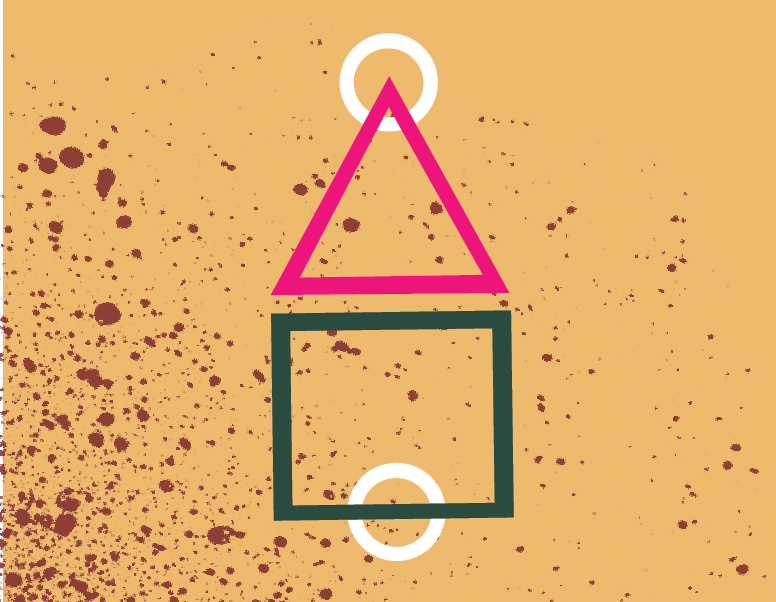 "Squid Game" is a Netflix original show in which characters compete with their lives in childhood games for billions of won. The circle, triangle, square and circle represent a squid as the court for Squid Game. The offense tries to get from the top circle to the bottom circle while the defense tries to keep them out of the bottom circle.

What if you could win forty million dollars by playing childish games like hopscotch or freeze tag? Would you participate, even if losing meant death? This is the exact scenario desperate players find themselves facing in Netflix’s new original show, “Squid Game.”

The Korean thriller follows single father Seong Gi-Hun (Jung-Jae Lee), who is desperate to pay off his debts when his well being and ability to see his daughter is threatened. A chance encounter in a subway provides him with the perfect opportunity. By simply playing games from his childhood, Seong has the chance to make 46.5 billion won (39 million USD).

Arriving at the game arena, Seong finds himself among 456 other indebted participants, including a cancer patient (Oh Young-Soo), a thieving teenager (Jung Ho-yeon) and an immigrant (Tripathi Anupam), identified only by their player numbers. Seong is surprised to find that among them is his childhood friend, Cho Sang-Woo (Park Hae-Soo), who he had assumed to be well-off.

Excited by their new opportunity, generous gamemasters and whimsical environment, the players eagerly dive into their first game. The players are enthusiastic to play a game of Red Light, Green Light in exchange for millions of won until the first player to move out of turn is brutally killed.

While the players are struggling to survive, an officer named Hwang Jun-Hotakes it upon himself to investigate his brother’s recent disappearance. Seong’s seemingly insane police report about a deadly competition may just be the lead he needs.

Thematically, the series explores the truth of human nature and what may drive people to do the unthinkable. It is an examination of ruthless greed, contrasting the nature of selfishness and selflessness.

The goal of the gamemaster is to remove the players from their worldly privileges and inequalities and to provide them a fair opportunity to redeem their lives.

The setting seems to be pulled directly from a children’s book, and I was especially reminded of the works of Dr. Seuss. The bubbly soundtrack provides a harsh contrast to the grave stakes of the game but distinctly reminds me of songs from real-world game shows, like “Wipeout” and  “Big Brother.”

I am also impressed by the skills of the actors and actresses in the show. They play complex characters and subtly exhibit their descent into madness. I was surprised to find that this was model Soo-Oh Young’s breakout acting role as I felt she did a phenomenal job with her character.

One criticism I did have lies in the writing for the VIPS, a group of elite upper class who pay to view and wager on the game. Their spoken lines seemed corny and childish, and the delivery felt strange. However, they were the only characters in the show who regularly spoke English, and I imagine that writing a script in a non-primary language may create some nuances in the complexity of the lines compared to those spoken in Korean.

The first season came out on Sept. 17 on Netflix. The final episode of the series leaves many questions on the table and several conflicts unresolved. It certainly leaves plenty of material for a second season, and I am excited to see where they take the series.

With several films about life-or-death games coming to rise in the past years such as “Nerve” and “Escape Room,” I was concerned that “Squid Game” would be repetitive or washed out among them. However, “Squid Game” was able to hold its own and stand out among similar films.

The plot was well executed and highly entertaining with characters you can learn to love or love to hate.

I would personally give this series a 5/5 on the star scale. The public and other critics seem to agree as the first season scored a whopping 100% fresh on Rotten Tomatoes.

The first season of “Squid Game” is both suspenseful and entertaining with all of the right elements of a good thriller.  It stands out among Netflix originals in terms of quality and creativity.

“Squid Game” is perfect for anyone seeking a short nail-biting show between studies, or anyone who needs a new show to binge-watch on Netflix.