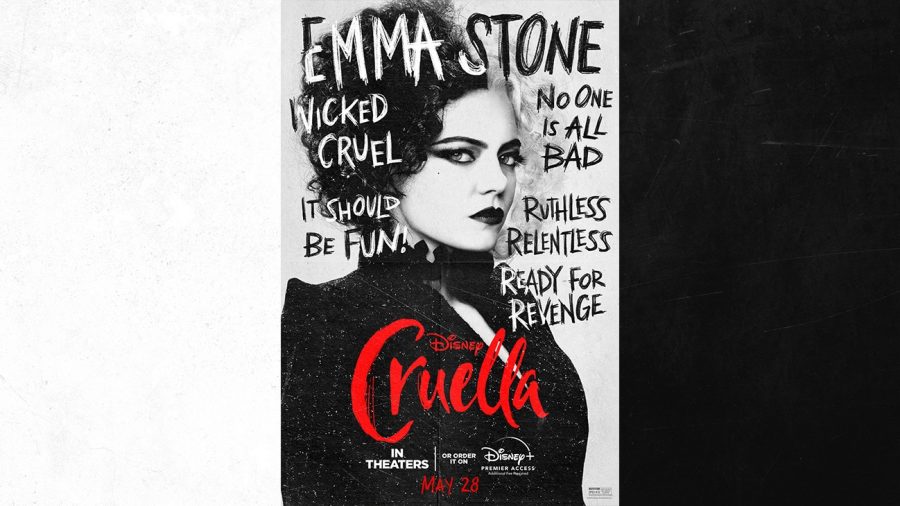 “If she doesn’t scare you… no evil thing will.” The old song still rings true in Disney’s new take of the classic villain Cruella De Vil.

“Cruella” is the origin story of an orphan girl taking place in London in the mid-1970s. From low beginnings, Estella  (Emma Stone) dreams of becoming a top fashion designer.

She finds herself at the top of the fashion chain with the help of her partners in crime, Jasper (Joel Fry) and Horace (Paul Hauser), through admittedly non-ethical means. However, she finds that staying at the top is much harder than getting there.

Cruella’s journey through the fashion industry turns into a means for revenge as hard truths come to light and she quickly becomes enemies with her former idol, the Baroness played by Emma Thompson.

While we were admittedly skeptical going into the movie and through some of its opening scenes, we found ourselves pleasantly surprised at how the film handled Cruella’s backstory.  Unlike the dog-nabbing narcissist the original film portrayed, “Cruella” displayed the beloved villain in a new light that surprised both of us.

“Cruella” seems to take place in its own world, serving as a reimagination of the original story rather than a recreation. The drastic change in characterization of the villain may annoy some fans, but we feel it’s a good example of a recreation done right. It is creative and fresh without entirely ignoring or disgracing the source material.

Two cinematic elements especially stood out to us, being the wardrobe and soundtrack. With flashy colors and stunning outfits everywhere, “Cruella” is a fashion lover’s dream.

Jenny Beaven, Academy Award winning designer, created 80 pieces for the film according to Variety. Each piece seems more jaw-dropping than the last.

Beyond that, the songs suited both the context of their scenes and the nature of “Cruella,” with classic English rock numbers that exude power, chaos and rebellion. This includes works by The Zombies, The Rolling Stones and Nancy Sinatra.

It also explores the idea of warring identities and the importance of self-expression. Cruella learns how to expand her creativity as she battles between her identities of Estella and Cruella.

“Cruella” is our current favorite adaptation when compared to other Disney live-action adaptations. “Cruella” offers an exciting new story instead of a flat-out remake of the original “101 Dalmatians.”

We give this film a four out of five. The film has good qualities, but it does not catch our attention as the best movie ever.

Despite the hesitation we had in the beginning concerning how the adaptation would handle one of Disney’s cruelest villains, this film exceeded our expectations. It added exciting new elements without disregarding the original material. “Cruella” is a must-see for movie lovers everywhere.

Cinema USI is showing Cruella at 8:30 p.m. Saturday in the Quad.