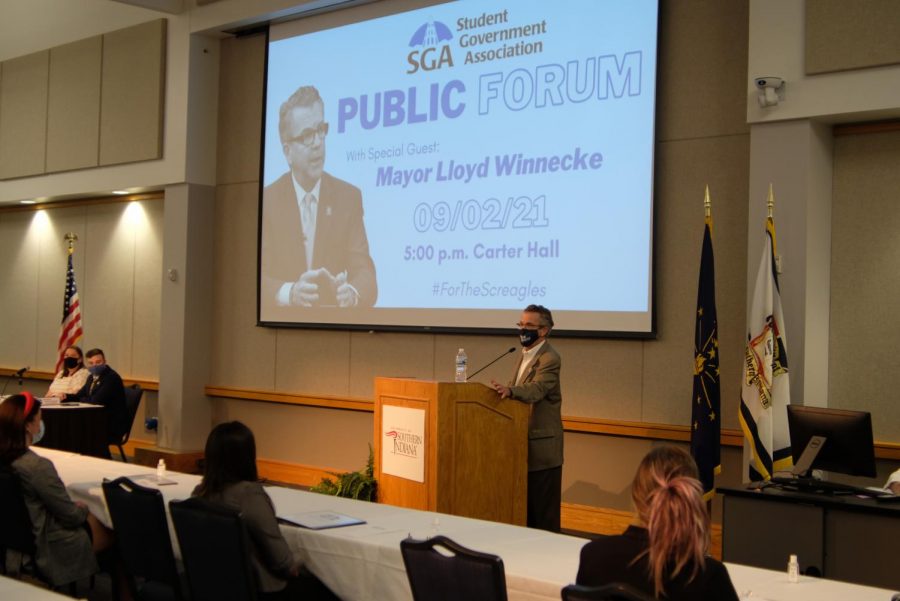 The meeting was conducted Thursday in Carter Hall. Winnecke informed the students of the mayor’s responsibilities and updated the university on the current economic and social standing of Evansville.

“I usually work 75 hours a week,” Winnecke said. “But it’s still a great job. It’s actually the best job I’ve ever had.”

Winnecke said that he started his professional career as a broadcast journalist. He said he thought he would stay a journalist his entire life.

“You have to be open-minded and know that who you are today is a snapshot in time of where you’re going to be,” Winnecke said.

Winnecke said that the city of Evansville plans to open the Deaconess Aquatic Center and the Penguins of Patagonia exhibit in Mesker Park Zoo within a few weeks.

With the rise in COVID-19 cases in the area, Winnecke said the city encourages everyone to get vaccinated.

“The leadership of the university is really ingrained in important boards and organizations in the community,” Winnecke said.

Anna Ardelean, SGA president, said she wants to better represent the campus community through the Of, By, For Plan.

“To be ‘of’ the students, we are wanting to improve representation,” Ardelean said.

She said they will look at the current SGA positions to ensure they are inclusive, and they will be reaching out to student organizations.

To be ‘by’ the students, Ardelean said SGA will be increasing their transparency on the activities and legislation passed.

Ardelean said the ‘for’ portion of the plan will be to improve the way SGA serves the university. This is why they opened the public forums that will be held once a month, she said.

Even though all SGA meetings are public, Ardelean said these forums will provide space for the public to come and feel heard.