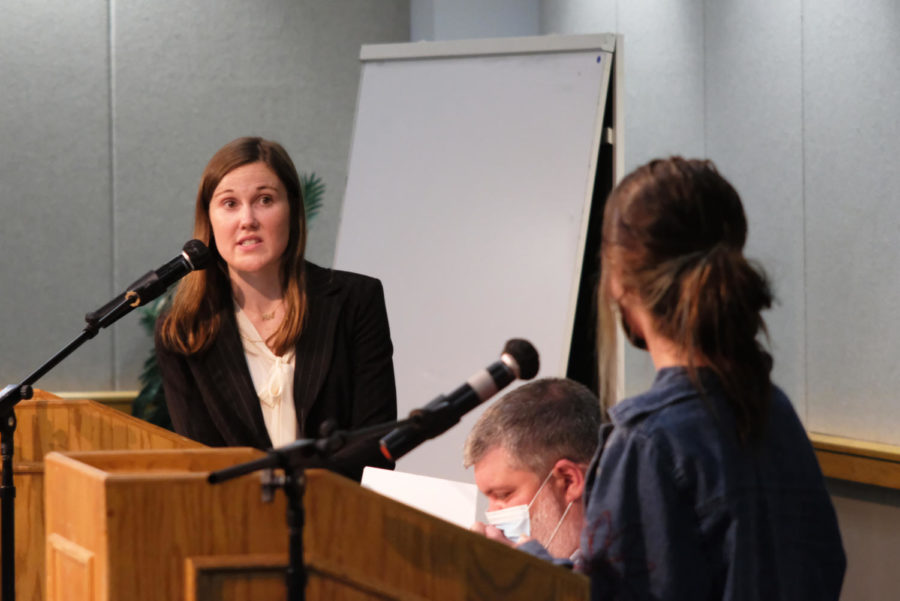 Ellie Kiesel, president of Students For Life, responds to Noelle Harrington, a freshman English major, in Carter Hall Wednesday. Harrington got up to speak after Kiesel opened the floor to attendees wanting to discuss the topic of abortion.

Students for Life led a discussion on abortion in Carter Hall Wednesday after the opposing side withdrew from the public debate.

The Feminist Majority Alliance requested to postpone the debate till Fall 2021, listing multiple reasons. SFL opened discussion to anyone in attendance for the event.

“While we cannot force them to honor the agreement to defend the pro-choice side tonight, we will not allow them to cancel public dialogue,” said Ellie Kiesel, president of Students for Life. “I don’t think any less of them, I just think that they’re cowards.”

President of the Feminist Majority Alliance, Brooklyn Pittman, said the organization backed out of the debate due to student stress and respect for the recent passing of SFL member Paige Schemanske. Pittman declined to address the situation further.

Kiesel dedicated the event to Schemanske in her opening remarks, saying that she was a passionate member and would have been in attendance that evening.

The introduction was followed with a moment of silence in Schemanske’s honor.

The topic chosen by both organizations was if abortion was a women’s right. Keisel and Lydia Moesner, vice president of Students for Life, presented the argument they had prepared for the debate that abortion is not a women’s right.

“If the unborn are human beings like you and I, with the same rights, then abortion is not a woman’s right and can never be justified.” said Kiesel in her opening statement

Moesner spoke after Kiesel and continued to address her views on women’s rights.

“I strongly agree that women do have rights. However, our rights as women to fair treatment, equality, and resources, all begin with the human right to life,” Moesner said.

Following their statements, the floor was opened to audience discussion. Kiesel urged pro-choice attendees to speak about their views.

Anna Ardelean, president of the Student Government Association, broke the crowd’s silence. She was the first audience member to speak at the event.

“Someone had to go first,” Ardelean said. “It was painful to sit there, and they were about to end it and if we had ended it, we would have been deprived of a wonderful conversation.”

Many students followed Ardelean’s lead and made their way to the open podium originally reserved for the Feminist Majority Alliance. Students on both sides furthered the conversation with statements and questions.

One of these students was Sydney England, a freshman nursing major, who originally planned not to attend the event.

England decided to drive to Carter Hall after watching the event remotely because she felt that SFL was unprepared for the event.

“They weren’t ready to attack all arguments that were given to them,” England said.

She said she wanted to defend those who’ve had an abortion in the past, especially people she knew personally.

“It is their choice. It is a legal choice, and they chose to have that abortion to have a better quality of life,” England said. “And, in my opinion, they didn’t do anything wrong.”

Cole Stephenson, a junior economics and philosophy major, spoke at the podium three times. Although Stephenson currently identifies as pro-choice, he said he does not think either side is right.

“Ideally, I want to change the material conditions that manifest all these problems that precipitate a legalization of abortion.” Stephenson said. “If that’s mitigated, I don’t think we should have abortions. There’s no reason for that anymore.”

Stephenson mentioned many times throughout the event that he believes there is a difference between a person and a human being. He said it is important to hear the other side of important issues.

Stephenson said, “I may not have persuaded them in particular, but if there’s one person in this crowd that I could have swayed in there I think I made an impact.”