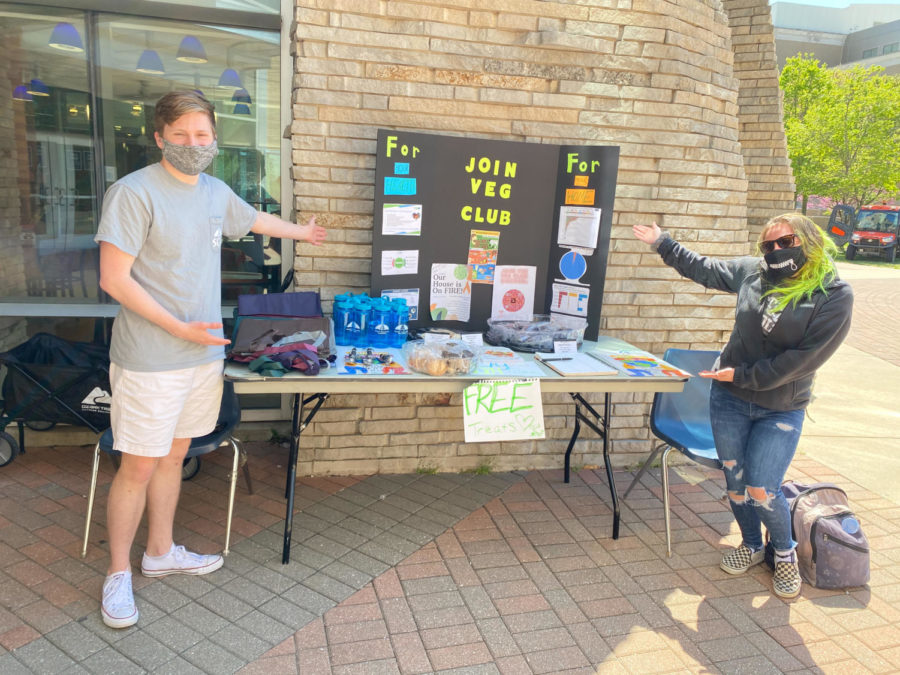 SGA partnered with student organizations to bring environmental awareness to campus. The organizations began tabling Monday and will continue through Thursday in the University Center Breezeway.

Members of the SGA and Vegetarian Club passed out vegetarian snacks, reusable grocery bags and measuring spoons to students from 11 a.m. to 1 p.m.

“I want to be able to make sure that students can become excited about the environment and look towards a positive future of changing the problems that present themselves,” DeBruyn said.

SGA seeks to address environment issues on campus, in the surrounding area and globally, DeBruyn said.

“If we are the Student Government Association and we don’t even think about the environment, which plays a big role in everyone’s lives, are we really helping the student body?” DeBruyn said.

SGA partnered with the Vegetarian Club and Philosophy Club to raise awareness about environmental organizations on campus.

SGA also partnered with SustainAbility, a student organization that seeks to educate, act and advocate for more environmentally sustainable options on campus.

COVID-19 affected these organization’s ability to connect with students on campus, DeBruyn said.

The Philosophy Club and SGA are hosting a virtual debate at 7 p.m. Tuesday between William Bowers, USI alum, and Mary Stoll, associate professor of philosophy, on how students can reduce their greenhouse gas emissions.

SustainAbility and SGA will be handing out painting supplies for pots and pollinator friendly seeds 11 a.m. to 1 p.m. Wednesday in the breezeway.

Pollinators such as bees and butterflies transfer pollen from one flower to another, according to pollinator.org. Plants that are pollinator friendly provide pollinators with nectar.

The organizations will also hand out tea with information about composting. The idea came from a play on words from the organization name ‘SustainAbili-Tea,’ Bowers said.

Environmental Week this year is more important Bowers said, because they weren’t able to have the event last year due to the pandemic.

“I’m really excited to finally be able to present something to the USI community that’s going to hopefully open their eyes a little bit to what’s going on with the planet in a fun and understandable way,” Bowers said.

To wrap up environmental week, SGA will be giving away succulents for Earth Day 11 a.m. to 2 p.m. Thursday in the University Breezeway