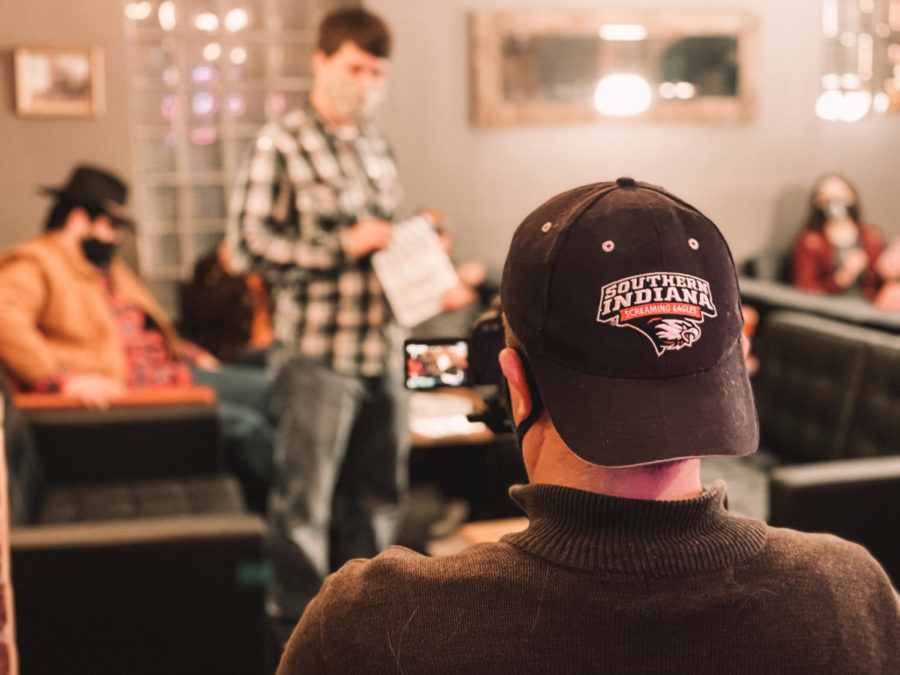 Students film "The Laramie Project" at The Rooftop Food and Drinks on Martin Luther King Jr. Boulevard. The theater department adapted the play to film because it required multiple set changes.

“The Laramie Project” is set to premiere on April 15 and will be available until April 22. Students, faculty and staff can purchase a ticket on the theater program’s website.

“It’s definitely something that, ironically, we could only do during COVID,” Lutton said.

The “Laramie Project” required multiple set changes, so it was a good choice for the theater’s first on-location movie, Lutton said.

“The Laramie Project” is about a gay college student that was murdered in Laramie, Wyoming in 1998. The actors’ lines are from real interviews with Laramie residents conducted by Moisés Kaufman and a small team from the Tectonic Theater Project. The cast and crew recorded on campus in various locations including the performing arts center, the university center and the art center. They also recorded off-campus at The Rooftop Food and Drinks.

Filming the movie was different from anything the theater department has done before, said Grace Koltz, a junior theater arts major and production stage manager.

“We filmed the movie over three weeks,” Koltz said. “Filming weekends from basically like 9 a.m. to sometimes 10 at night on both Saturdays and Sundays, and we filmed weeknights as well, usually starting at around 6. ”

Koltz said rehearsals for the movie began in Zoom meetings. Actors had to figure out how to portray their roles by using real footage from the interviews, she said.

Acting on stage and acting for a movie is totally different, Koltz said.

“People talk about being part of a groundbreaking project,” Koltz said. “You really don’t realize how groundbreaking it is until you do that, especially working through COVID,”

The university theater department is doing something new in a time when most theater programs are closing because of the pandemic, said Eli Young, a senior theater arts major.

“I feel blessed to be a part of a groundbreaking experience,” Young said.

Young was casted as an understudy for Andy Paris and was in charge of a student filming group. He said he spent an upwards of 250 hours on the movie and had several 12 hour days of recording.

Young said he hoped filmmaking was going to be added to the university’s theater department.

The university theater department is offering a new course called digital film in the Fall 2021 semester. Charles Schefer will be teaching the course.