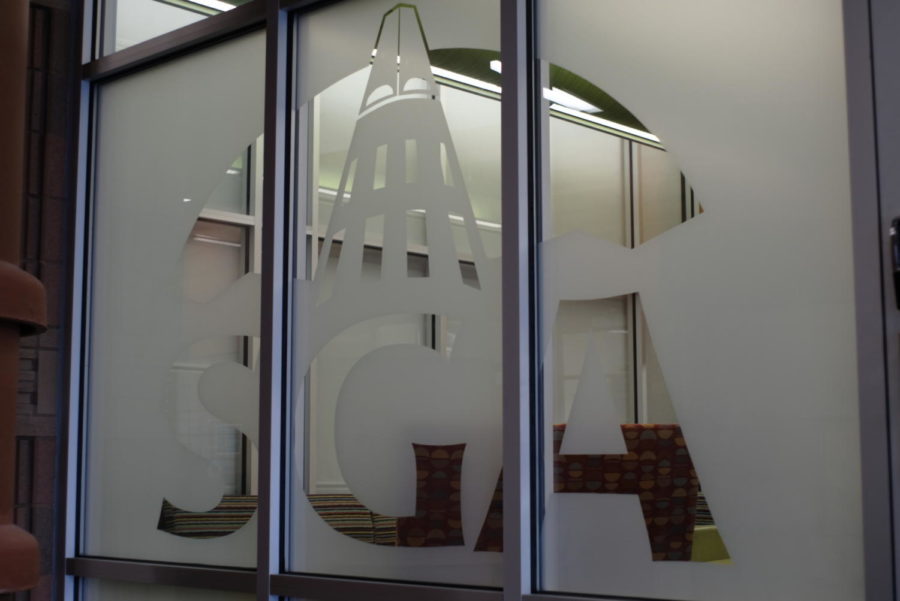 The decal displayed outside the Student Government Association located in the lower level of University Center East. Polls will be open for spring elections April 5-9

Students can apply for SGA positions through April 4. Candidates can campaign after their application is approved by the election committee. SGA is searching for a president for the 2021-2022 academic year.

Students will receive an email with a virtual ballot on April 5. Polls will be open for the entire student body through April 9.

Kelsey McCullough, a senior political science and philosophy major and SGA president, said being the SGA president for the last two years has been one of the best experiences in her life.

“It feels amazing to be able to genuinely change student’s lives for the better, and USI has given SGA a platform to help students in any way we can. They are always so receptive and so willing to listen, and they constantly want to hear our ideas and what we think,” McCullough said.

The SGA president position can be tough at times, McCullough said. She said she would advise the future president to remember why they want to be SGA president and the impact that they will have on students’ lives.

“I hope to see new faces in SGA and old faces, but just to see it continue to grow and thrive and continuing to advocate for students like it has done for over 50 years,” McCullough said.

Andrea Lopez, a senior psychology major, Spanish and gender studies minor and SGA Chief Justice, is organizing the election. Lopez said the election process is more low key this semester because of COVID-19.

The town hall will not be held this year, Lopez said. She said normally a town hall is held to give candidates who are running for a one-seat position the opportunity to present why they are the best candidate.

Teamwork has been key to organizing the election amidst the pandemic, Lopez said. She said she met most of her college friends through SGA.

“I think it’s one of those organizations that you’re really able to bond with people,” Lopez said.

SGA is looking for candidates who are open-minded, organized and creative, Lopez said.

“It’s a great way to be involved and really make an impact on campus because we have those direct partnerships with offices and different executive positions,” Lopez said.

William Bowers, a junior accounting and finance major and Spanish minor, is one of three SGA Romain College of Business Representatives. As a business major, Bowers said SGA teaches students leadership abilities and is a good resume builder.

“You’re going to serve as the middleman between the student and USI administration. So, you have to be the voice for two people at once serving as that vessel for change in your community,” Bowers said.

Elections are the formal way of getting involved with SGA, but that should not discourage students from pursuing vacant positions or positions they are not elected for by the student body, Bowers said.

“Being a vessel for change is a really invaluable experience that I think anyone should pursue,” Bowers said.

SGA will announce election results on April 12. Inauguration will be a virtual ceremony at 5 p.m. on April 15.

Elected candidates will become active in their positions in the Fall 2021 semester.