Student organizations face challenges, find worth in continuing recruitment at the involvement fair 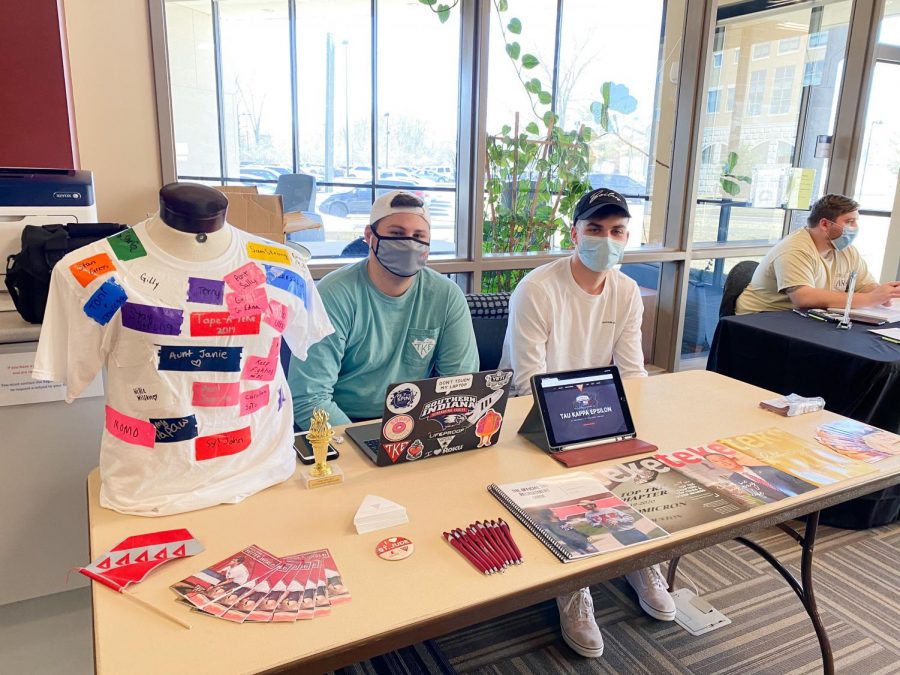 Organizations waited for students to come as the Student Involvement Fair was beginning on Tuesday. For the hour a Shield reporter was at the fair, no students visited.

The Student Involvement Fair goes from Feb. 22-26 in the university’s recreational center. The fair showcases groups and clubs to students interested in participating.

Jenny Garrison, Associate Director of Student Development Programs, oversees all the student organizations at the university. Garrison said comparatively the attendance for the fair is a lot lower this year.

Garrison said besides COVID-19, the rescheduling of the involvement fair and the new location could be attributed to the low attendance.

The involvement fair began a week later than planned after snow caused the campus to close during the week it was originally planned.

Garrison said she felt it was important to give student organizations the opportunity to recruit with the Student Involvement Fair, even with the changes..

According to Garrison, planning for the student involvement fair began in November and all 50 slots filled for the Involvement Fair.

“It’s been a difficult year, but I think our students have really rose to the challenge,” Garrison said.

She said the priority of her office is getting students connected, she said it plays a role in student retention.

“I think the pandemic has challenged them in a lot of new ways,” Garrison said. “How do you connect people that have no idea what groups there are?”

“I don’t blame USI as much, but I feel like stuff like this just isn’t put together as well as it used to be,” Wendel said.

Wendel said the COVID-19 pandemic stopped the fraternity from being able to do the large fundraisers it normally hosts.

According to Wendel, one of the large fundraisers Kappa Alpha had to cancel due to COVID-19 was the annual beauty pageant. Wendel said the proceeds go to the Muscular Distribution Association where every $1,000 the fraternity raised sent a child to a camp to learn how to walk.

Ty Lauderdale, a sophomore business management major, is on the recruitment committee and handles the alumni relations for Kappa Alpha. Lauderdale said table recruitment like the involvement fair has not been successful this year.

Lauderdale said they have only had one person come to their table at the involvement fair.

“We’ve really had to go out of our way other than tabling and on-campus events to even meet new people,” Lauderdale said.

Lauderdale said recruitment for Kappa Alpha has been down compared to past years. Kappa Alpha recruited 14 both semesters of the last school year, according to Lauderdale. They only recruited two in Fall 2020.

“We’re not able to have as many events and stuff, but it’s also been difficult communication-wise just not seeing as many people face to face,” Lauderdale said.

Ashley Brown, president of the American Society of Mechanical Engineers and senior mechanical engineering major, said the Student Involvement Fair felt like it was organized well but was not advertised enough.

“If I wasn’t the president of this club, I don’t think that I would know that the involvement fair was going on,” Brown said.

Brown said her organization took a different approach because of the COVID-19 pandemic. Brown said normally the organization makes the human-powered vehicle from scratch, but for the safety of its members, ASME has not been meeting in person and has not been building the vehicle.

“We can’t really do anything unless we meet in person,” Brown said. “We’re actually taking our club to a more studious approach as we’re offering online homework help.”

Cassidy Quinn, senior health services major, is the event coordinator for Sexuality and Gender Alliance. Quinn said SAGA has been able to host all in-person events and has seen an increase in involvement because of the pandemic.

“People have really felt that need to intentionally seek out other like-members of the LBGTQ community to have that like-space because people have been stuck at home a lot with their parents and families,” Quinn said. “I feel the engagement has actually been really good.”

Quinn said SAGA never did virtual events because it is challenging to have discretion virtually with an LGBTQ organization.

“We felt like we still need to have our meetings in person because, virtually, you could potentially have someone who is not out, and there’s more risk there than there is for geology club or something,” Quinn said. “There’s a certain sensitivity that you have to have.”

Ellie Kiesel, president of Students for Life and sophomore nursing major, said it has been challenging to lead a student organization during a pandemic because she said she has been trying to safely meet with the organization in person as much as possible.

“With the pandemic, it’s not easy to be in a group or lead a group,” Kiesel said. “But if it was easy, it wouldn’t really be worth doing. The hard things in life are what’s worth doing.”

Kiesel said with the meetings do not feel as personal with social distancing.

“Just like how teachers have a hard time leading their students, it’s kind of hard to read the group and know what they’re thinking,” Kiesel said.

Kiesel said Students for Life has seen an increase in student involvement during the Fall 2020 semester and Spring 2021 semester, despite the challenges. Kiesel said she thinks one reason this could be is that people are seeking interpersonal interactions.

“I think people are eager to be in contact with people,” Kiesel said.

The Student Involvement Fair’s last day will be Friday in the Rec and Fitness Center from 11 a.m. to 1 p.m.