One protestor present at organized protest 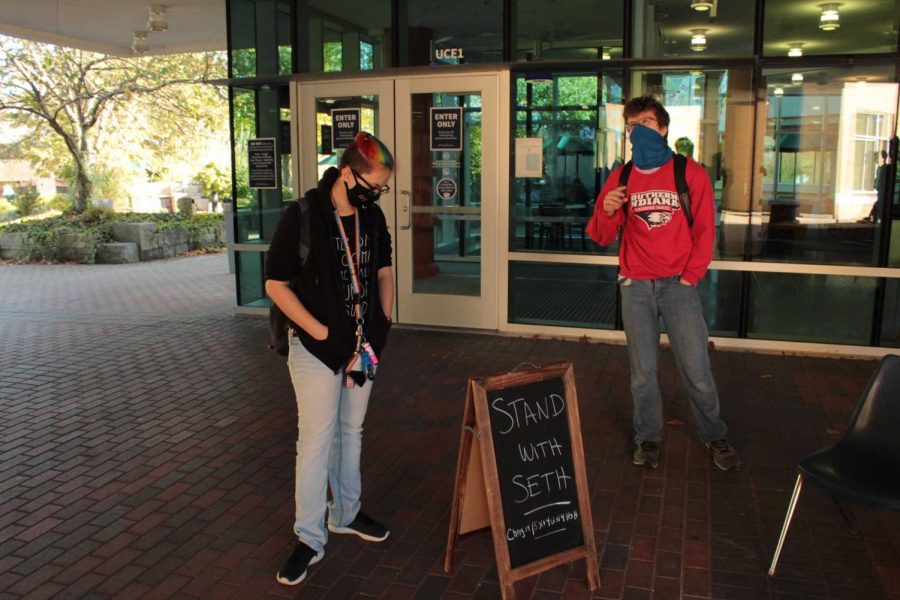 Thursday, a silent protest for Seth Pressler was organized to take place on campus in front of the Wright Administration Building and on the Quad starting at 8 a.m.

Early that week, Pressler was reportedly asked by the university to continue his education off-campus.

“The University of Southern Indiana has made the decision that I am creating an unsafe environment or at least one that feels unsafe regarding some of my tics,”  Pressler wrote on his Facebook page on Oct. 12th, “I am being required to vacate campus within the week and will be continuing my education online.”

44 News and Eyewitness News also came to campus to capture the protest.  The first protester arrived around 9 a.m. this morning.

Eric Osborn, fifth year radio and TV major, came to stand in the silent protest in support of  Pressler.  They met through Campus Outreach, a religious student organization, here at USI.

“He’s a good guy. Unfortunately, with this he’s getting a bad rap,” Osborn said, “He wouldn’t hurt anybody despite what Tourettes makes him say.”

Osborn feels the university should have taken middle ground on the situation.

“They should have viewed the situation differently and possibly talked to his doctor for more information about his condition,” he said.

“(I maybe saw bad reactions from his tics) in the Loft,” Osborn said, “No one, as far as I’m aware, has outright talked down to him.  I know he was asked to switch dorms at the beginning of the year because his RA was getting complaints about his tics.”

Osborn was the only protestor who arrived to protest the university’s decision to have Pressler continue his education off campus.  Osborn reported that even the organizer of the protest did not come to stand in support of Pressler.

Osborn speculated that the reason the protest was not well attended was because it was organized last minute and combined with rainy weather.

Students across campus are continuing to show their support for Pressler in other ways.  Julia Ennis has started an online petition that as of Oct. 14th has over 12,000 signatures.

President Rochon addressed the petition on Oct. 13th with a video posted to YouTube and an email sent to students.

Rochon is unable to address the situation directly due to FERPA laws and HIPPA laws.

“I am not hiding behind FERPA or HIPPA laws, but rather I stand in support of the protections they provide for each and every student at our university,”  Rochon said.

Tomorrow at 3 p.m. on the Quad, Trent Thompson, president of the College of Republicans, is organizing a group photo for anyone who wants to support Pressler.