The Freshman 15 can go both ways 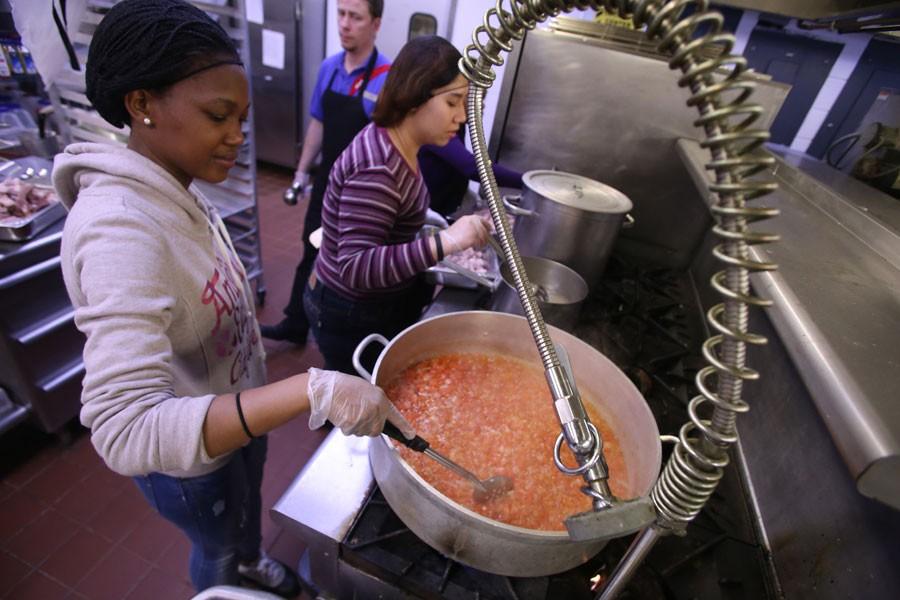 Mpho Mashabe (left), a graduate student studying public administration, stirs ingredients for the dish, jollof rice, that will be representing Ghana as Kow Pik Yok (right), a freshman English teaching major, prepares her food, bak kut teh, for Malaysia Thursday in The Loft’s kitchen. Both dishes will be served at the International Food Expo Friday in Carter Hall.

The freshman 15 was a joke between my dad and me before I came to college; usually going in only one way: up. I didn’t realize that it could also go in the other direction as well. I didn’t even think it was real until I lost ten pounds in my first semester.

Ten pounds isn’t a lot, but I’ve never been able to lose more than three before. Losing ten pounds over the span of one semester is a lot.

Before I found out what was going on with my own body, I lived off of candy or junk food like a lot of other freshmen. I frequently skipped meals to do other things, making empty promises to myself saying that I was going to eat later, but I never did.

Not eating causes more problems than you would think. An empty stomach slows your ability to do all the things you’re trying to get done. Maintaining a balance between schoolwork and everyday life requires a lot of energy, and in order to get that energy, you need to eat at least semi-healthy food.

Not eating causes an enormous amount of stress on the body and mind on top of the general foreboding of ever-looming deadlines and running around campus going from class to class. Not eating makes it easier to get into a semi-depressive episode and get panic attacks.

Also, vitamins are not a good substitute for food. They help the immune system and your body function, but they don’t have the nutritional value that actual food does.

Overeating can be just as bad though. It can cause students to feel tired and slip into a food coma. This can make students not show up for a class or, arguably worse, fall asleep in class.

On top of all of that, both overeating and undereating can cause some serious health problems and compromise the immune system.

All of this is why students need to do the bare minimum to take care of themselves. For all you freshmen out there, that means spending at least 30 minutes in The Loft eating something with protein, a fruit or vegetable, and maybe a dessert.

College isn’t a competition about who can be the least healthy. It’s a place to do your best and grow as a person. So eat well and stay healthy.