Why ‘The Midnight Gospel’ is the best show for quarantine 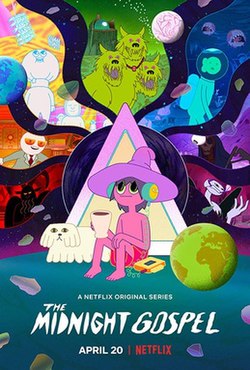 What do singing zombies, philosophical debates, blackholes and saxophone playing angel-Satan relationships have in common? The show, “The Midnight Gospel”.

I was apprehensive when I first started watching this show. I thought it was going to be all about religion. I was going to watch it just for the art style alone and hope the show would be somewhat interesting, but it was so much more.

The art style was like “Adventure Time” or “Rick and Morty,” colorful and simplistic, but still highly detailed and eye-catching. The art moved from scene to scene seamlessly.

The story was so much better than I had dared to hope, and while there was focus on religion in episodes two and three, it didn’t really show up outside of them.

The show starts with a 46-year-old guy named Clancy Gilroy, who uses a simulator to go from planet to planet, interviewing interesting people and talking about life for his space cast “The Midnight Gospel”.

Clancy almost survived the zombie apocalypse with the president of a dying world while talking about drugs and if they are good or bad. He talked to Death about his father and got them to help get back his hose for a water slide. Clancy was able to talk to his dead mother, got them both turned into a planet and watched her die again, this time in a black hole.

This show deals with a lot of heavy topics, but they are told in a way that is interesting and highly unusual. Most people tend to shy away from these topics or joke about them, not wanting to think about these types of things unless they have to.

The show does have an underlying story. It is little between getting put through a meat grinder during a revolution and walking through underwater terrain with a magical fish. Clancy just wants to find peace and if that means breaking into his neighbor’s house to steal green oil, then he’ll do it.

Every episode is centered around the idea of being at peace, which is something everyone needs during this pandemic before we’re all too stir crazy. It offers some generally helpful tips about how to meditate, gain a hobby or how to get out of your own head, without having to go outside.

“The Midnight Gospel” is only eight episodes long and fairly short. It only took a day to watch, while still being present in classes and doing homework. I can’t see why someone wouldn’t want to watch this show.