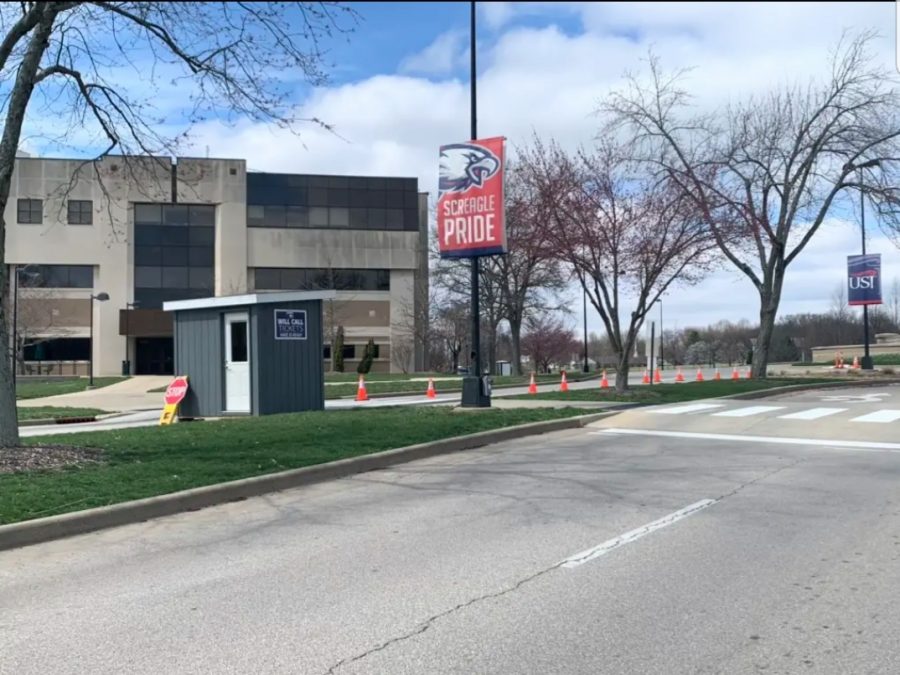 All entrances and exits besides University Boulevard are blocked off. Authorized personnel must present their university IDs before entering campus.

This semester has turned out to be a great hassle for USI’s students and faculty. Many people have been put out and businesses have closed for the time being with COVID-19 spreading throughout the world.

The CDC has recommended that universities move to online classes and for citizens to avoid going out as much as possible for the next month.

USI has followed these suggestions with good reason. It is understandable how quickly an illness could spread with so many people on campus at the same time,

Though it is a hassle for everyone involved, it’s good universities are taking action to protect their students and staff members.

There are still those who would disagree with certain precautions taken to avoid the further spread of COVID-19. It’s difficult to know what could be defined as overreacting and under reacting.

Seeing supplies such as toilet paper being stockpiled by individuals so early on in the stages of self-quarantine makes the situation seem less like an actual concern and more like a nuisance.

The flu also seemed more dangerous than this virus and the country has never reacted in this manner before because of it. There are still people that refuse to vaccinate, even though the death totals for the flu are so high.

The outbreak of Ebola didn’t even warrant a reaction to this extent. There is still no treatment licensed by the FDA for this virus. Symptoms for EVD are a lot more severe as well.

However, when you look at numbers, there were only eleven people that were diagnosed with EVD in the U.S. and currently 35,079 confirmed cases of COVID-19. The infected numbers have increased dramatically over the past few weeks.

Once realizing that there are many people who are at a high-risk and who would not easily get through an illness such as this, social distancing seems a great idea for now.

Some individuals have said how insignificant COVID-19 is. They believe that it isn’t any worse than the average flu. In many cases, the virus may not be that big of a deal for someone in good health to get over, but those same people are exposing others who may not be healthy enough to fight it off.

That is the important take-away when discussing social distancing and university closures. It isn’t always about what may happen if you get the virus. There is more to consider, like what would happen if others got the virus.

Many people are quick to assume how easily they would get through the virus and how all of this mass panic is unwarranted. Not many take the time to think about others in this time and what they may have to go through.

At a local Sam’s Club in my hometown, individuals loaded their carts with toilet paper and proceeded to sell them in the parking lot for $8 a roll.

It is actions like this that feed into the hysteria that can ultimately be life-threatening to others. It’s important to be aware of the danger of this virus and to take precautions, but it’s another thing entirely to take part in behaviors like this that are taking advantage of people..

The university is doing what it should to help prevent the spread of this virus, though it is upsetting having to be kicked off-campus.

It’s relieving they are at least giving students refunds and allowing Munch Money to be used in the fall semester.

This sort of global crisis has not appeared in our lives before and will most likely take time to figure out the best way to go about making everything safe for everyone.