All sports cancelled until April 6 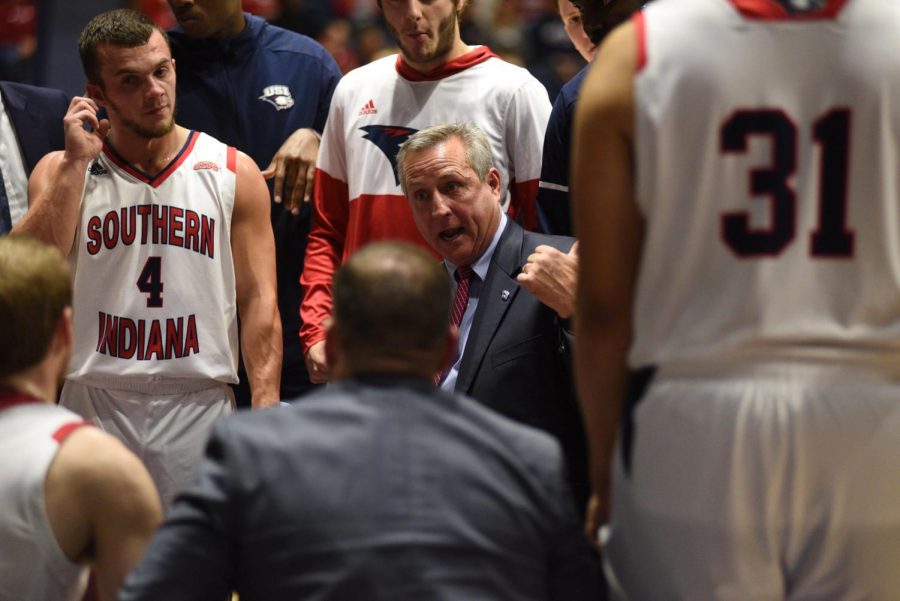 Coach Rodney Watson talks to the team during a timeout against Kentucky Wesleyan College at the Screaming Eagles Arena.

The NCAA, GLVC and USI Athletics have cancelled all athletic season games and practices until April 6.

After April sixth the Athletics department will review the situation brought by COVID-19. They will either extend the cancellation or slowly start practicing again based on how the virus develops.

“There’s been some decisions made in the last couple days, the NCAA has canceled all the spring championships for all of our sports at all levels,” Athletic Director Jon Mark Hall, said. “The GLVC canceled their spring sports championships. Then there was a suspension of practices and games until April 6. After that we would evaluate the situation on April 6.”

Rival Bellarmine will not compete in any of their spring sports, dropping out completely because of COVID-19, according to Hall. He said he predicts they will not be the only one.

Hall said this would be a tough situation for student athletes in particular, because of future recruitment and preparation that went into getting ready for the games. Hall said that the first priority should be to the health of the athletes.

“Right now we’ve sent our teams home,” Hall said. “We’re not going to have any contact with them. We want them to be safe, we want them to be healthy. We want them to get a good start on their online requirements starting on March 23, and our hope right now is we’ll see them back on April 6 when classes resume.”

He said he also understands cancellations can disappoint and upset people, especially since there is a possibility of cancelling the entire spring schedule. Hall said the cancellations are for everyone’s health and safety.

“I think there is a possibility there won’t be any games played in the spring,” Hall said. “When you don’t play for championships in the spring, GLVC or NCAA, you’d have to evaluate whether you really just want to get work into practice prep for next year or provide the student athletes with a good experience in the spring.”

Hall said if the athletics department decides to play after April 6, none of the teams will be traveling out of this region. This is especially detrimental to cross country and track and field teams, who travel outside of the region quite a bit.

“We’ll evaluate on April 6, see where we are but to travel outside this region would be off the table,” Hall said. “I think the other thing to be realistic about is, maybe some of those events that we were traveling to would be canceled and there might not be an event there.”

He said if USI were to play games after April 6,then attendance would be severely limited to only essential personnel and immediate family, but that is subject to change in the next three weeks.

“I just think that every day we’re getting more information, we’ll have a better sense of where this thing is,” Hall said. ”We may not play any games all spring long, and our coaches and student athletes will understand why. We’ve got to do what’s best for our community.”