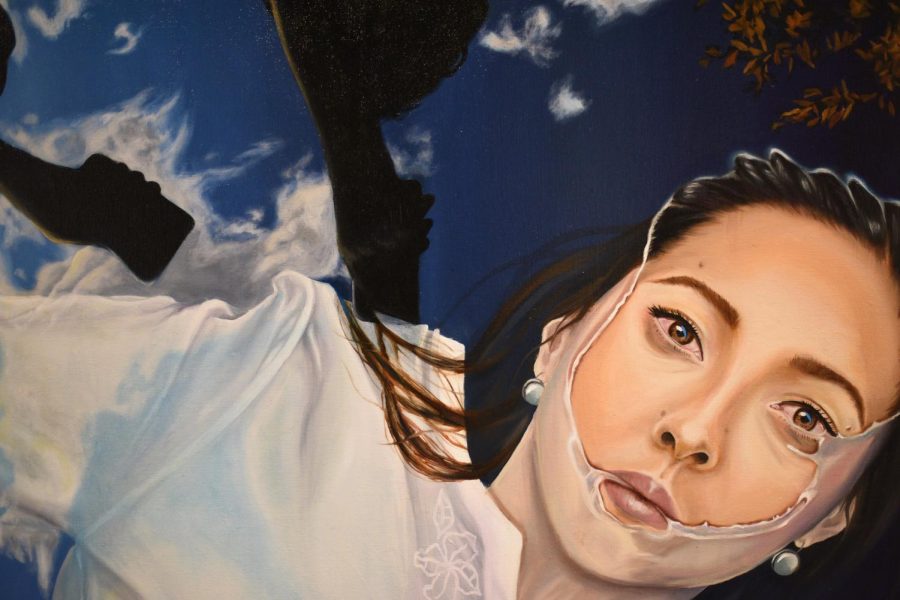 This piece titled “Ophelia” is a part of a series by Efroymson Bridge Year Fellow Livia Alexander called “The Shakespeare Suicides.” Alexander's show Mortal Flesh will be on display through March 15 at the McCutchan Art Center/Pace Galleries.

It took Livia Alexander her whole life to get to the level of painting she is at now.

Alexander curated her “Mortal Flesh” exhibit as part of the Efroymson Bridge Year Fellowship which allows a postgraduate student to spend a year making art. The exhibit is made of several paintings created by Alexander and will show until March 15 in the McCutchan Art Center/Pace Galleries.

Alexander, who graduated in 2018 with an art degree, said painting has always been her preferred medium because of its versatility and how someone can turn it into anything they want it to be. She’s been painting and drawing since she was five and USI allowed her to take several painting classes to develop her skills.

“The idea of creating something out of nothing is attractive to me and that’s why I feel painting is fun,” she said.

Alexander said she likes to explore the relationships between people and with themselves. She said the paintings start with an idea, like a situation she or a friend was in, or an observation of life. She would take a photo using someone she knew as a model, play with the composition and base the painting off the reference.

Some of the paintings are influenced by classic literature in mythology. A series of three paintings in the exhibit titled “The Shakespeare Suicides” depicts three Shakespeare heroines who committed suicide with a modern twist. Cleopatra is shown laying on a bed with a syringe in hand and two marks on her arm resembling the snake bite from the original play. Ophelia is depicted staring submerged in water as two hands with smartphones take pictures.

“I wanted to make their death more contemporary to show that this still happens today,” Alexander said.

Sarah Fagan, an administrative assistant to world cultures and languages and criminal justice, was the model featured in “Grip of Oizys III” which depicts a woman laying on the floor with cake in her hand. Fagan modeled for the painting when she was a junior art major.

Fagan said she is open about her struggles with mental illness and depression and Alexander approached her to be a part of the series. Fagan attended live figure drawing classes before and said it was different to be on the other side of the process.

Fagan said she was stunned by the finished product and it really captured how she dealt with anxiety and depression at the time.

“It wasn’t only well composed and well rendered, it also captured that emptiness and the mindless consuming of stuff to stop yourself from thinking all these negative things,” she said. “She really did a great job in all respects.”

Alexander said the exhibit felt like coming full circle because she worked in the galleries as a student and now she gets to display her work there. She said it was a good way to end her time at USI before going to graduate school.

“USI made me the artist and the person I am today,” she said. “I really enjoy that I get to share what I’ve done with students and faculty and the community.”

Alexander said art, if done right, is personal. She said she poured her heart out with the exhibit with what she is concerned about with society and the people around her.

“It’s a little weird,” she said. “Art is an intimate thing, but it’s also meant to be shared.”