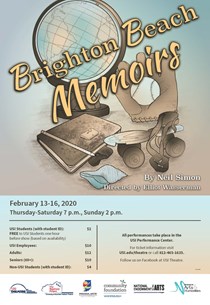 Growing up can be trying for any young teen. It’s even harder if you’re a Jewish-Polish teen living in 1930s Brooklyn.

The Great Depression and an inevitable world war can’t compare to the greatest challenge of all: your own family.

“Brighton Beach Memoirs” by Neil Simon was USI Theatre’s first show of the semester. The play, directed by Elliot Wasseman, chair of Performing Arts, followed a teenager named Eugene who feels smothered living in a house he shares with not only his parents and older brother but his widowed aunt and her two daughters.

Eugene narrates to the audience as we are introduced to the individual characters and their unique problems, leading to one disastrous dinner and the fallout that comes after.

The play does a good job of mixing comedy and drama. Every actor gets their moment to shine and it was impressive to see students hold their own against experienced members of the Actor’s Equity union, Buzz Rody and Laurie Dawn.

The tension is palpable throughout the play as cracks begin to form between the various relationships of the family members and it all comes to a head in the second act in an effecting way. The humor early on eases you into the second act.

The performance gave the feeling that the audience was seeing something they shouldn’t. Even the impressive two-story set reflects this as it allows the audience to peer into the lives of these people as if looking into a dollhouse.

Eugene himself acts as an audience surrogate. He has his own issues to grow through, as his complex relationship with his brother and his budding sexuality which manifests as a growing lust for his cousin (yes, it’s that kind of show). You can feel the uncomfortableness of his life as he begins to learn more about the people in his family at the same time the audience does. You get the sense by the end of the show that you have been on the journey along with him.

The characters portrayed in the show are flawed, hilarious and utterly sincere. It paints a nostalgic picture of a family who has no one but each other and knows they have to stick together if they want to survive. It’s brought to life so expertly through the acting, lighting and the set.

I’ve always been impressed with what the Theatre Department here can do and I’m grateful that shows like this can exist and be accessible to students. I’m looking forward to what we see in the future.