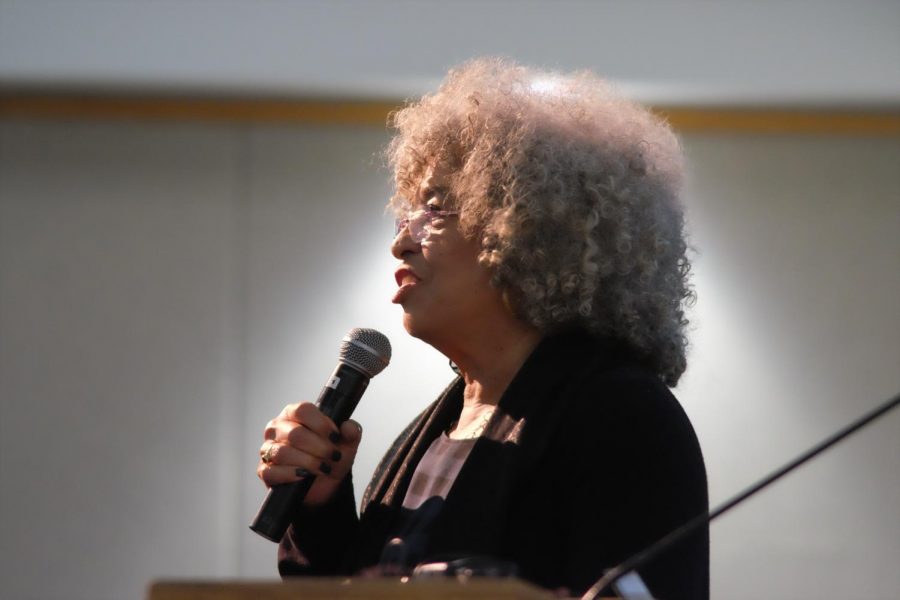 The crowd stood and cheered as Angela Davis took the stage.

“I was warned that Evansville is quite conservative,” Davis said as the crowd responded with laughter.

The renowned educator, activist and scholar was the keynote speaker of the Mandela Social Justice Day event, which took place on Feb. 5 in Carter Hall. The event was sponsored by Special Programs and the Arts to commemorate Nelson Mandela.

Davis became known for her involvement in a politically charged murder case in the 1970s. She later joined the Black Panthers, a revolutionary political organization, and an all-black branch of the Communist Party.

“When I was charged with murder, kidnapping and conspiracy, I found myself facing the death penalty,” Davis said. “I experienced something that has remained with me over the years.”

She said she doesn’t consider herself a courageous person and when she realized she could be ushered into a gas chamber at San Quentin’s, a state prison in California, she was scared.

“However, as the movement to free me grew and developed, as I received letters and statements from people all over the world, that solidarity began to overshadow the fear,” she said.

She said she was fortunate enough to meet Nelson Mandela in 1990 when he toured the U.S. in the aftermath of his release from prison.

Davis visited South Africa in 1991 and Mandela invited her to stay in his family home. He walked into her room one night and seemed to be embarrassed upon seeing her.

Davis said he apologized and said that his grandson normally stayed in the room and he would come in to read him a story every night.

“When I think of Nelson Mandela, I don’t always think of the great heroic fighter,” Davis said. “I also think about the loving grandfather who found time to spend with his grandson each evening.”

Davis said one-way activism has changed since is the rise of social media.

“I think that it has been helpful, but it also had some negative effects,” Davis said. “Negative effects in the sense that many people have come to assume that mobilizing is the same as organizing. So it’s easy to put a message out on social media saying, ‘be at this place at this time and we’re going to have a demonstration.’”

Davis said it’s not really bringing people together, but that doesn’t mean it can’t happen through cyber methods.

“This seems to be what the future holds,” she said. “You walk down the street and everybody has a telephone. So I think that what’s really interesting are those people who are developing creative ways of using new technologies.”

Davis also said students have been at the forefront of every radical movement she can think of.

“Which makes sense because when you’re in college, you’re learning a great deal,” she said. “You’re learning how to ask questions and challenge things that you’ve taken for granted.”

Sakina Hughes, chair of the Mandela Social Justice Day committee, said having Davis come to campus was like a dream come true.

“We just thought, wow, that would be really great if we could get her here, but let’s see, she might be too busy or something,” Hughes said.

Hughes said the first word that comes to mind when she thinks of Angela Davis is freedom-struggle.

“She’s been working on prison abolition, which is a whole movement that is geared toward getting people that are in prison, their rights and humane condition,” she said.

“It’s taken some time, it’s taken history to look back on to see what he was actually doing, to appreciate him,” she said.