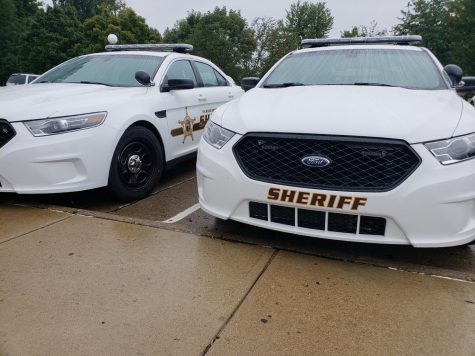 When Vanderburgh County Sheriff’s Office finalized a partnership with the university to have deputies patrol the campus in 2018, Sheriff Dave Wedding said it would lead to a safer campus.

Wedding said that he thinks the partnership between Public Safety and the Sheriff’s Office is “awesome.”

“I’ve never heard anything negative out there,” he said.

He also said that having the deputies on campus has helped the Sheriff’s department.

“The patrol guys are maintaining patrol because we have guys on campus that are making runs for them because they’re working out there so it takes away a few of our runs, which is always good,” Wedding said.

He also said he appreciates President Ron Rochon’s ability to work with the Sheriff’s department and include them.

“He’s called me personally on some issues and invited me to discuss campus life with his faculty,” Wedding said. “I thought that was very nice of him to include me. When I’m out there he’s always gracious and I appreciate his willingness to work with us as true partners.”

Five full-time sheriff deputies started patrol on campus as a partnership between Public Safety and Vanderburgh County Sheriff’s Office in August of 2018.

Steve Bequette, director of Public Safety, said he thinks it speaks for itself that the same five sheriff deputies are still on this campus.

“It goes to just show that the partnership is good and it is in line with all the main attributes of what a good partnership is by definition and every one of those attributes is present here,” he said. “We have trust. We have defined expectations. We have mutual respect. We have good communication. We have synergy. All those are present.”

Bequette said the deputies and Public Safety officers get along great and check in with each other everyday so they know what’s going on within the campus.

Some of the benefits of the partnership between the two departments include increased visibility around campus and reduced response time.

Bequette said there are still other deputies assigned to the campus during special events so the deputies working on campus every day remain free to patrol and take care of issues that may or may not be on campus.

“I just think the overall safety of the campuses increased dramatically,” Bequette said.

Bequette and Sam Preston, assistant director of Public Safety, are both retired from the Sheriff’s Department.

Sheriff’s Deputy Toby Wolfe said the university is like a small community and they’ve worked with Public Safety officers in the past.

“We’ve known them when we were out on the road,” he said. “They had an incident that needed police, we would still come off the road. So there’s really not much difference. We just have a good working relationship.”

Wolfe said the sheriff’s deputies are there for anything and more than happy to help anybody.

“They’ve accepted us really well and we accept their job because they do a variety of different things that you know, we don’t do,” Gries said. “They’re EMTs. They do a lot of stuff for the kids that people don’t realize.”

The deputies are CIT (Crisis Intervention Team) trained for students who are struggling.

Gries also said they have been getting good feedback not just from the students, but from the faculty as well.

Bridges also said the Public Safety Building needs to be moved completely. Their current space is a temporary building.

“If we have particular storm warnings, it’s not a good location for public safety to even be housed in,” Bridges said. “So we’re looking to make that more of a permanent home.”

Bridges said this may be in the new REC center, as part of the project the university is working on.

“That would allow Public Safety to be present in an area that’s open a lot later in the evenings and also be close to other areas that are open late, such as the library and then when we have events in the arena,” Bridges said. “So it’s a very central location.”

The university is starting to look at the planning process, so Bridges suspects that construction would start spring of 2021 and finish sometime in 2022.