Planting the beauty of campus

USI faculty talk about the importance of landscaping 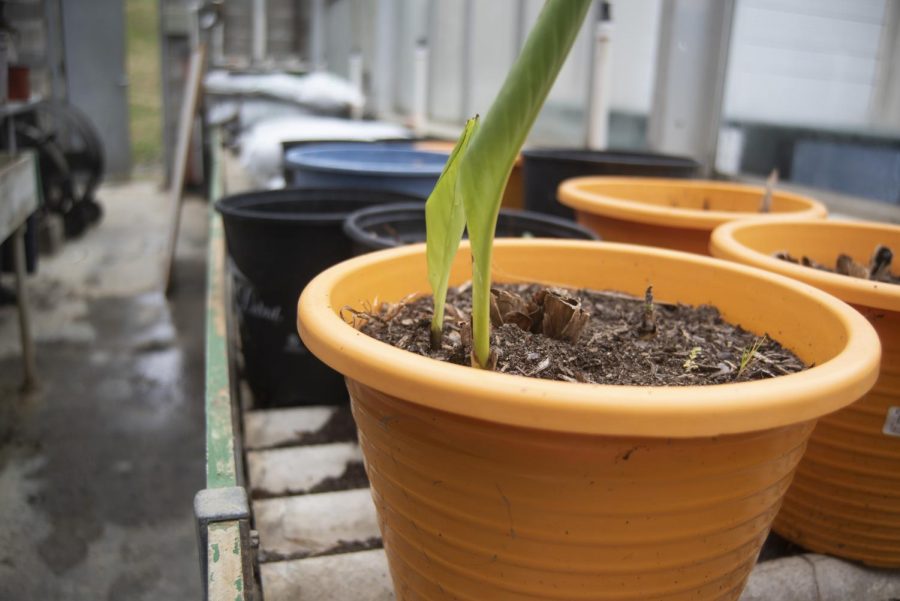 The greenhouse at the Grounds Center stores and grows plants used for the university's landscaping.

The dormant bulbs of 30 to 50 elephant ear and banana plants are kept at the greenhouse at the USI Grounds Center waiting to be planted in time for the spring season.

The tropical plants are dug up during the winter so they don’t die out from the cold. The greenhouse is filled with large flower pots where the bottoms are filled with plastic bottles in addition to soil, in order to make them lighter.

“It’s not the nicest, but it gets the job done,” Ryan Kaczmarski, the grounds, fleet and athletic fields supervisor, said.

The USI Grounds Center is the base of operation for the landscaping on campus. This facility includes the greenhouse, where plants for landscaping are stored and grown, and a large garage where the vehicles used to maintain campus are kept.

Kaczmarski took a job at the Grounds Center, where he previously worked as a student worker after he graduated from USI in 2013. He worked under then-supervisor Donald Fleming who is currently the property supervisor and service coordinator at USI. Kaczmarski, who had a baseball scholarship as an undergraduate, decided to work full time at USI because he wanted to get his master’s degree in sports management, which he did in 2017.

Kaczmarski said the team at the Grounds Center is in charge of maintaining the campus. This includes melting the snow in the winter, taking care of the athletic fields, mowing the grass, trash removal, recycling, overseeing the vehicles and landscaping.

The USI Facility, Operations and Planning buys approximately 22,000 tulip bulbs each year in October to be planted right after Thanksgiving. The bulbs bloom in the spring to decorate USI’s flower beds before they are dug up to be disposed of and replaced with new bulbs the next year since they won’t regrow.

He said the tulips bulbs are bought from a company called ColorBlends that ships the bulbs from the Netherlands. The bulbs come in on a truck on a huge skid and it takes about 12 business days to plant them all.

The other plants are bought from local Evansville landscaping companies like Hillside Gardens and Aching Acres. They include a variety of green foliage, like ferns, holly bushes and juniper bushes.

Kaczmarski is usually in charge of ordering the plants but said he has tried recently to push the selection process off to different members of leadership. He said sometimes his team designs the landscaping themselves, but usually, it’s a collaboration between him, James Wolfe, director of facilities, operations and planning, Miles Mann, associate director of facilities, operations and planning, and an architect hired from outside the university.

“I try to pick things that are pretty, give us good color, but at the same time are extremely user friendly so my staff isn’t having to put in too much work to maintain and keep track of everything,” Kaczmarski said.

Wolfe said the first thing people notice when they go on campus is how it looks, including the landscaping. He said his department gets a lot of comments that USI feels like home and they try to make the campus look good so people feel comfortable here.

“If you’ve got good surroundings, it makes people feel better and gives you a better, safe and secure feeling,” Wolfe said. “It makes a good impression to make sure that people will come back.”

Kaczmarski said although many people think groundskeeping is a springtime job, they have to plant the bulbs and put up the holiday lights in the fall and cut down dead leaves in the winter. The approved budget for Facility, Operations and Planning was $13,070,464 for 2019-2020 according to the university’s annual operating budget.

Kaczmarski said every day is a new challenge, especially when snow and ice needs to be melted. He said he’s normally at work at one or two in the morning before the rest of the workers get there.

“It makes for a long day, but it puts me at ease a little bit knowing that we’re done with everything before the students wake up,” Kaczmarski said.

Kaczmarski said he never thought he would be doing what he’s doing now when he was in high school. He originally wanted to be an athletics director.

“I kind of took a different turn, but I’m not upset with where my life is right now,” Kaczmarski said.  “I enjoy coming to work every day and I know a lot of people can’t say that.”