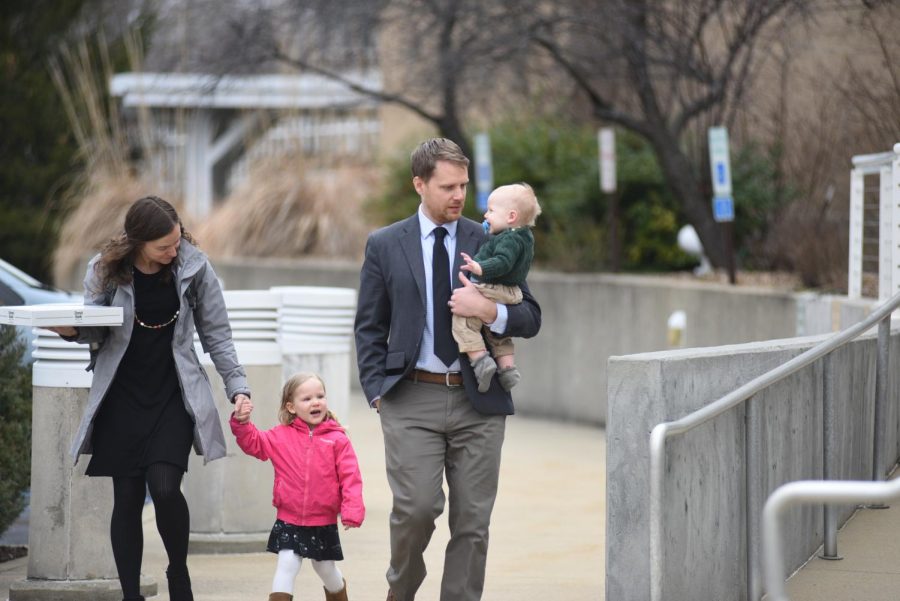 Family, friends and community members all gathered in Carter Hall Friday and Saturday to celebrate the life of a university legend.

Carter Hall remained silent, with people gathering around to express the loss of the university’s founding president.

“We gather here to celebrate a timeless personality,” Vice President Emerita for Advancement Sherrianne Standley said in the eulogy. “A leader extraordinaire who enriched so many of our lives.”

She said Rice was a remarkable, selfless leader who didn’t have personal ego. His focus was always extended to that of the community.

Cadets from the university’s Reserve Officer Training Corps served as the Honor Guard for Rice and the USI Chamber Choir sang for the funeral, directed by Daniel Craig, associate professor of Music.

The USI Chamber Choir stood and sang, gaining the attention of the room and inviting everyone to stand as they sang.

Flowers surrounded the front of the room and no one spoke as two cadets carefully unfolded the American flag and laid it on top of the casket.

As the ceremony continued, the room filled with the emotions of the mourning.

She told the story of Rice and the care he had for his community.

Rice grew up in a large family in a small north central Indiana community and attended a one-room public school. Standley said he was bright, so he had teachers who gave advanced instruction to eager students during lunch and after school.

She said he helped younger and less-advanced children in the one room after he mastered the lessons himself.

“I imagine that’s where he learned his patience and his love for the teaching profession,” Standley said.

He attended Purdue University, served in the Korean War and taught in Indiana’s public school. He met his wife, Betty Jane Fordice, at Purdue.

“They married and started on a life’s journey they could not have predicted,” Standley said.

They had two children, Mike and Denise, and moved to Evansville in 1967. At this time, Southwestern Indiana had the lowest postsecondary educational attainment level in the state.

“He was certain of what was possible,” Standley said.

Rice worked with Southern Indiana Higher Education, Inc. to deliver a dream of bringing the expertise of all the state’s educational resources to Evansville.

“First a foundation for a baccalaureate institution, then graduate courses, then linking with a medical college,” Standley said.

Rice retired after 27 years at the helm.

“Who could have predicted?” Standley asked. “Rare among today’s college presidents’ tenure, though USI’s presidents all have defied national trends, serving longer at USI than national peers and all retiring to live and contribute in this welcoming community.”

After retiring, Rice went to New Harmony and became active in historic preservation and community restoration.

Rice led the fund-raising campaign and oversaw the physical restoration of the Rapp Owen Granary, which is now a one-of-a-kind center for historical and cultural events in the community.

“Forever with us, David Rice, our beloved president,” Standley said to end the eulogy.

The funeral service ended with the Hymn of Farewell, followed by a reception where people could visit the family.

The visitation Jan. 24 was led by Reverend Father Benard Lutz, a good friend of Rice, who was a campus minister at the university for many years led the prayer vigil where family and friends shared memories of the university’s founder.

Those who spoke said attended defined Rice was an exemplary leader, true gentleman, friend to all and tireless in his efforts for the university and its community.

Former Trustee Bruce Baker spoke along with several others. He said he told Rice several times that his life would not be what it is today if he hadn’t been connected to the university.

“We were blessed,” he said. “We got to a lot of wonderful things.”

He thanked Betty for being a part of the university.

Along with the services hosted by the university, there was a visitation was held Jan. 26 and a Celebration of Life Jan. 27 at Machledt & Services Funeral Home.

Rice was buried with military honors at the Fordice Family section of Portland Mills Church Cemetery in Parke County.