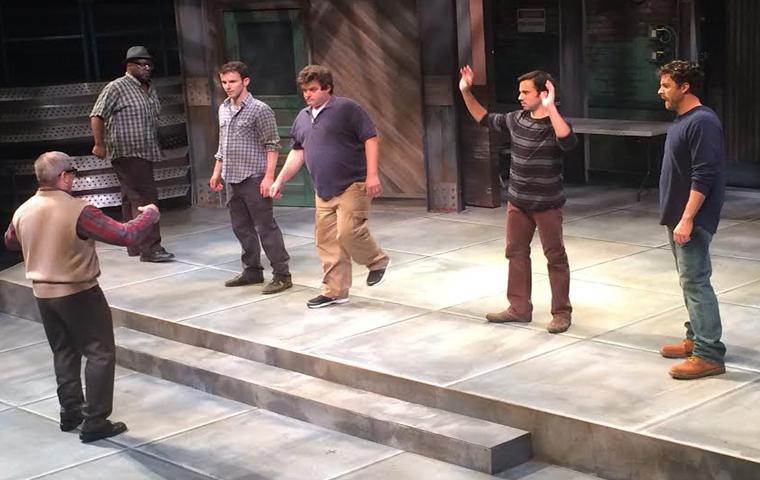 The cast of New Harmony Theatre's production of "The Full Monty" practices their dance moves Wednesday at the Performance Center. Photo by Megan Thorne/The Shield

For some, the New Harmony Theatre was more than just a thespian experience.

It was an educational experience, an opportunity for professional growth and a step into a new world of theatre.

With USI’s announcement in November that it would discontinue the Theatre, the door has shut on that opportunity.

“To be able to graduate with a foot in the door is a big deal,” junior theatre performance major Elijah Young said.

Young said it saddened him to hear the Theatre was closing because it gave him a good opportunity and insight into the world of professional theatre.

“I know people behind me won’t gain the same experience I had,” he said.

The university announced in a statement the reason it is discontinuing the program is because of dwindling audiences and reduced charitable giving. The university had to fund more than the program has been able to generate in revenue.

“One of the first things I read in the USI statement about the closing New Harmony was the idea that, well, they’re not filling up the houses, people aren’t coming to the shows,” he said. “I don’t believe that at all, because I was at every single show this summer, and they weren’t completely full, but they had at least a third. We had a couple of sellouts.”

Sophomore performing arts major Perci Hale said the New Harmony Theatre was a wonderful opportunity for students to find work outside of USI.

“One cool thing that was kind of promising to us was that we knew that since we were theatre students with USI there was a partnership there with New Harmony,” she said. “There was potential of us getting summer work and we could audition there.”

The Theatre’s discontinuation will also prevent future students from experiencing the benefits of the program.

“I’m a freshman so I didn’t ever get the opportunity to really figure out things more about that,”  freshman theatre performance major Amelia Schmitz said. “I think it’s sad because it was like an opportunity that we had to be more professional.”

The Theatre has run since 1988 and over the years, it had become “a major regional theatre and attracted the best professional theatre artists from all over the country,” according to its website.

USI opened the New Harmony Theatre following the financial struggles of an independent non-profit that had been running in Murphy Auditorium.

The Theatre continued to grow throughout the 1990s and early 2000s. They produced the world premier of a new play by noted dramatist, Thom Thomas, in 2005

The play “A Moon to Dance By” brought producers from The Kennedy Center in Washington, D.C. and from New York to New Harmony.

The university announced the closure was not an easy decision and they continue their, “longstanding and strong connection with Historic New Harmony.”

Leslie Townsend, Director of Community Engagement and Historic New Harmony, did not respond to multiple requests for comment before deadline.