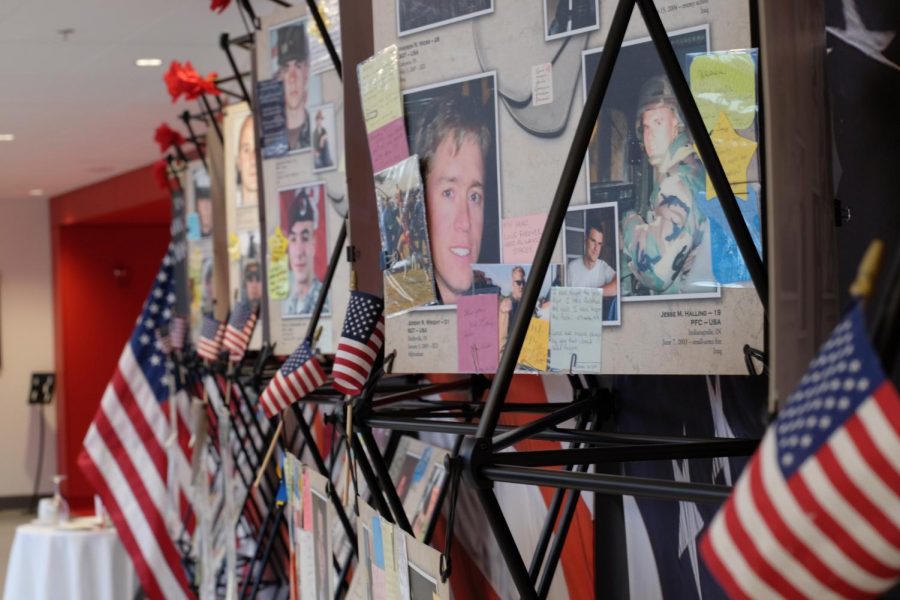 The "Remembering Our Fallen" war memorial ran from Jan. 22-28 in the Screaming Eagles Arena.

A wall displayed the memorialized and young faces of people in military uniform, their photos surrounded by post-it notes covered in hand-written messages picked up from surrounding tables next to the tissue boxes.

A nationally touring photo-display of Indiana Military who have died in a war zone since Sept. 11, 2001, was displayed from Jan. 22 to Jan. 29 in the Screaming Eagles Arena. The display, titled, “Remembering Our Fallen,” was created in 2010 to honor the memory of fallen military members and to encourage people to say their names.

Assistant Director of the Veteran, Military and Family Resource Center Joel Matherly said USI had to request the memorial, which is managed by Easterseals Crossroads in Indiana, with a donation. This was the second time USI has hosted the memorial since 2014.

Matherly said it was important to bring the wall because USI has a connection to it. He said there were 10 people from the area on the wall including a former Vanderburgh County Sheriff and a former USI student who was in the ROTC program.

Matherly comes from a family with military history and, as someone who has been deployed himself, he has friends on the wall. He said it’s important to bring the memorial to the community as a learning opportunity for students.

“These walls, it’s not just a name,” Matherly said. “It’s actually a picture of them…it’ll tell all about them.”

The memorial was a part of a week of events with a dedication ceremony on Friday and USI’s annual Hoops for Troops event on Saturday. Matherly said it was a big deal to get the memorial back on campus around this time because the Hoops For Troops event would be happening in the same area as the memorial.

He said it was important for students to go to the memorial because many of them were young when 9/11 happened. He compared it to the importance of people from his generation visiting Pearl Harbor.

“It’s important to know that kind of history and know the sacrifices that Americans have made,” Matherly said.

He said he spent time in Iraq during the first time citizens were able to vote without being under armed guard. Matherly said Americans have lost their pride to turn up to voting polls.

“I think we take some of that for granted sometimes, and I think that a memorial like this kind of brings that a little bit back into perspective,” he said.

“It’s been really emotional for most people,” she said. “it’s pretty overwhelming to see it like that and realize that these are people’s loved ones that have passed away…it really makes it real when you’re looking at it.”

Wright said she tried to read the notes herself, but could only make it about 25% of the way down. She said she felt honored to be a part of the event.

“It should be eye opening to anyone to realize how many local veterans have lost their lives defending our country,” Wright said. “I think it’s good to help everyone not take for granted the freedoms that they have and it really puts everything in perspective because you don’t really realize how much your freedom means until you see that people are losing their lives for it.”