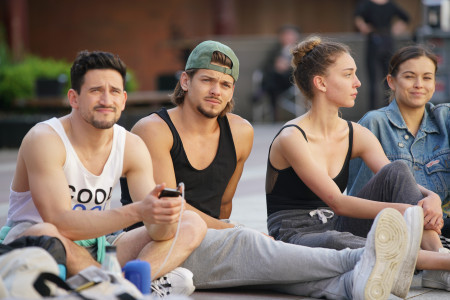 “Let’s Dance” is a recently released French film that follows aspiring dancers on the journey to professional dance.

The film focuses on the relationships between dancers from different styles of dance, including hip-hop and ballet.

Although “Let’s Dance” is full of passionate dancers, the film doesn’t portray this to the audience.

Joseph dreams of becoming a hip-hop dancer, and he and his two friends, girlfriend Emma and best friend Karim join a dance group to compete to make their dreams a reality. After the first stage of the competition, Joseph and Emma get into a fight and break off their relationship. Joseph and Karim then leave the group, and without anywhere else to go, Joseph has no other choice but to see his ‘friend’ Remi.

Joseph and Remi make a deal: Joseph and Karim can stay at Remi’s place as long as they become instructors at the ballet school he teaches at to get the students to become looser.

The plot of the film is set up interestingly. The hip-hop dancers help out the ballet dancers to accomplish their dreams and vice-versa. While dance is a major aspect of the film, “Let’s Dance” also follows the relationship between Joseph and Chloe, who is one of the ballet students. The romance element is brief, but being there for each other gave them the strength to be the best dancers they can be.

The film is centered around the competition and auditions. Joseph steps up as the choreographer for his new team, but questions his ability. Joseph starts to believe in his own potential as a choreographer with guidance and assurance from those around him.

Joseph is a well-rounded character who develops as a person throughout the film by becoming a leader in a time of need.

Another character that shows a lot of growth is Chloe. She rejected the hip-hop style at first, but accepting the form made her into a better dancer. Not only did Joseph and Chloe need the other dance style to accomplish their goals, but they also needed each other.

The setting is beautiful, because “Let’s Dance” is filmed all over Paris. In one scene, Joseph is running through the artificial island of Île aux Cygnes, and in another, Joseph and Chloe are attending a ballet performance at the Palais Garnier. The film takes the audience with the characters to virtually experience the breathtaking city of Paris.

While the movie was filmed in beautiful locations and the character development was done well, “Let’s Dance” does not make the audience fall in love. The film is considered a romance, but Joseph and Chloe’s relationship is kept on the down-low. It had the potential to be a heart-throbbing film, but it lacked romance.

“Let’s Dance” is not a horrible film. Watching the film can be fun and interesting as the audience gets to dive into Parisian life, but it’s nothing special and isn’t something that is rewatchable.