A clear voice in troubled times 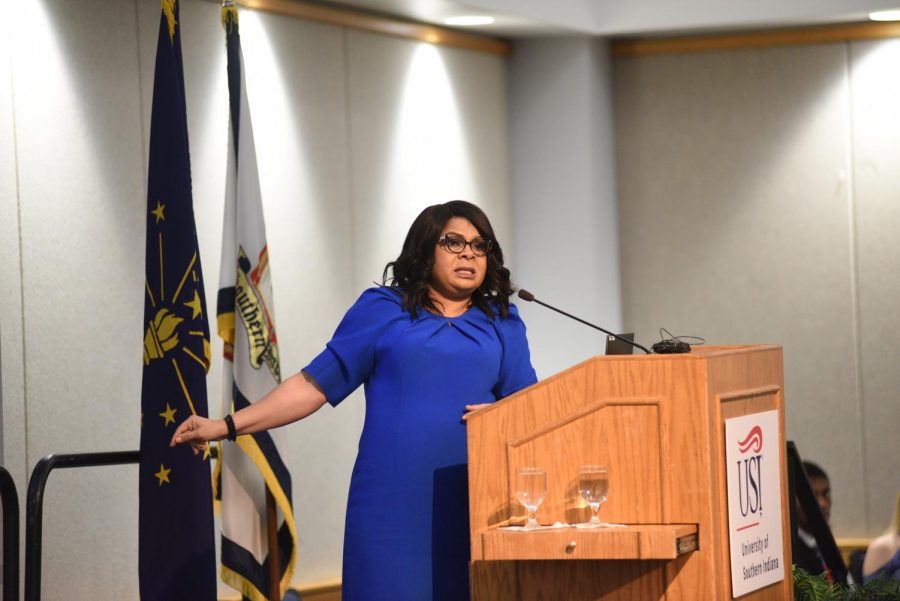 April Ryan stood before a crowd of people in Carter Hall on Martin Luther King, Jr. Day and asked them where was their “dis”ease (unease) at the state of the world for African Americans and where was the clear voice in troubled times that King represented.

Ryan, an award-winning journalist and author, was this year’s keynote speaker. She has been the only black female White House correspondent reporting on urban issues since 1997. The event was attended by several prominent officials including Indiana Lieutenant Governor Suzanne Crouch and Evansville Mayor Lloyd Winnecke.

The event was introduced by Executive Director of the Multicultural Center Pamela Hopson before leading into a speech by Crouch.  President Ron Rochon gave a welcome speech after Crouch that began with a moment of silence for the passing of founding USI President David. L. Rice.

“I want you all to know that Dr. King is so significant in our lives and he should be, he should always be, but there are men and women, boys and girls, who are truly ancestors who we don’t know who came before us, and gave the ultimate price as well,” Rochon said. “So when we celebrate today I want you to really grapple with this right here. This is important that we are just a stone’s throw from making mistakes globally with regard to how we see people, how we treat people.”

He said it’s important for the community to educate their children about compassion and respect and to make sure they’re ready to serve the world, their families and to understand that the greatest gift they were given at birth was their name.

“If we believe in this man and his legacy, this is what we’re working towards,” Rochon said. “This is what we are fighting for. This is the passion that I’m asking us to embrace on a daily basis.”

His speech was followed by a presentation of the colors by the USI ROTC and a performance by USI’s Gospel Ensemble Designed by Grace.

Ryan’s Keynote speech began after lunch was served to the crowd. Ryan began her speech by talking about how many people think back to King’s “I Have a Dream Speech,” but they don’t always remember what it took for him to give that speech.

She said King challenged the comfortable to be uncomfortable and he was a clear voice in a troubled time.

“Every day I think about Dr. King and that is the truth,” Ryan said. “If it weren’t for him and his “dis”ease, I would not be at the White House celebrating 23 years last week.”

Ryan said she wanted to remind Americans about the urgency of now and how, in 2020, the African American community still has the highest number of negatives in every category. She said what’s unfortunate is that many African Americans are still at a time where they’re wondering if their water is safe to drink, receiving foreclosure notices and being preyed on by banks.

Ryan said people need to organize, strategize and leverage in order to do what King would have done today.

“None of us in this room are that far removed from those who are still in need,” she said. “I’m not here just to ignite a fire for today. I want to leave something with you for tomorrow and the next day.”

Rhiannon Laupp is a freshman global studies major and she said she liked how Ryan was unafraid to point out the issues that still exist today within the African American community and society at large. She said she has never been to an event of this scale to celebrate Martin Luther King, Jr. Day.

“I think the public education system kind of fails when it comes to educating us about the civil rights movement,” Laupp said. “They like to tiptoe around the lynchings and the economic inequality of what happened and I think it’s really important to acknowledge that part as well, more than just saying, a man named Dr. King said I have a dream. You have to acknowledge that, as the speakers pointed out, he made the comfortable uncomfortable.”

Ryan said she is still hopeful today because of the diverse group of people that came to the event.

“Keeping (King’s) memory alive is not about reciting ‘I have a dream,’” she said. “It’s about the state of your dreams that aspire to inspire.”