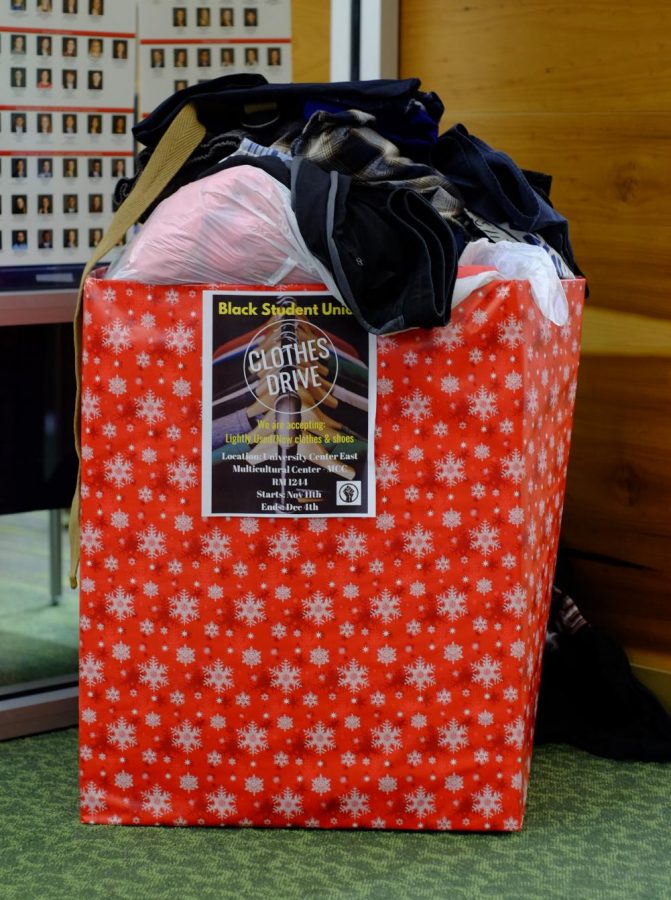 The Black Student Union hosted their clothes drive from Nov. 11 to Dec. 4 in the Multicultural Center.

Every other week the Shield will interview a student involved in volunteer work. This week, Perci Hale and Brittany Coleman talk about the Black Student Union’s clothes drive.

Perci Hale was not prepared for how cold Evansville winters would be when she moved here.

The sophomore theatre major and vice president of the Black Student Union said she did not need a coat for Alabama winters and never needed warmer clothes before.

“A lot of people don’t think about it,” Hale said. “We already assume that people have the clothing they need, but that’s not always the case.”

Hale said the Black Student Union (BSU) held a clothing drive to help with this issue.

“We wanted to do an event with BSU that would give back to the community,” she said. “(Clothes) are a big resource that not that many people think of.”

This was the second year the BSU collected lightly used or new clothes and shoes to be donated to the United Caring Shelter in Evansville. This nonprofit organization is a homeless shelter and that provides services day shelters, temporary medical care and low-income apartments for people in need throughout the Evansville community.

She said it can be easy for students to think they are not a part of the Evansville community.

“There is still always something you can do whether you are in college and working on a Ramen noodles budget or not,” Hale said. “Students can forget there is a whole outside of USI and there are people and a community outside of USI that need our help.”

Hale said they hoped to have more donations this year and the group worked hard to spread the word to students, the Evansville community and even reaching out to resources like the University of Evansville.

President of the BSU Brittany Coleman said the two university’s unions partnered together this year as a way to help bring more awareness to both group’s events and scheduling board meetings together to be a bigger influence.

“That’s exactly what we stand for as a union,” the junior criminal justice major said. “We can always know that (UE) will support us because we both have the same goal, to create a safe space where people can be comfortable, have fun, and grow.”

Coleman said the clothing drive works well in Evansville because it is a community that is always looking to them and other people are willing to give.

She said it’s important for the students to participate in charity events because the university is a large representation of Evansville.

“We all are grateful to go to college and giving to the less fortunate and giving them something to look forward to helps,” Coleman said.