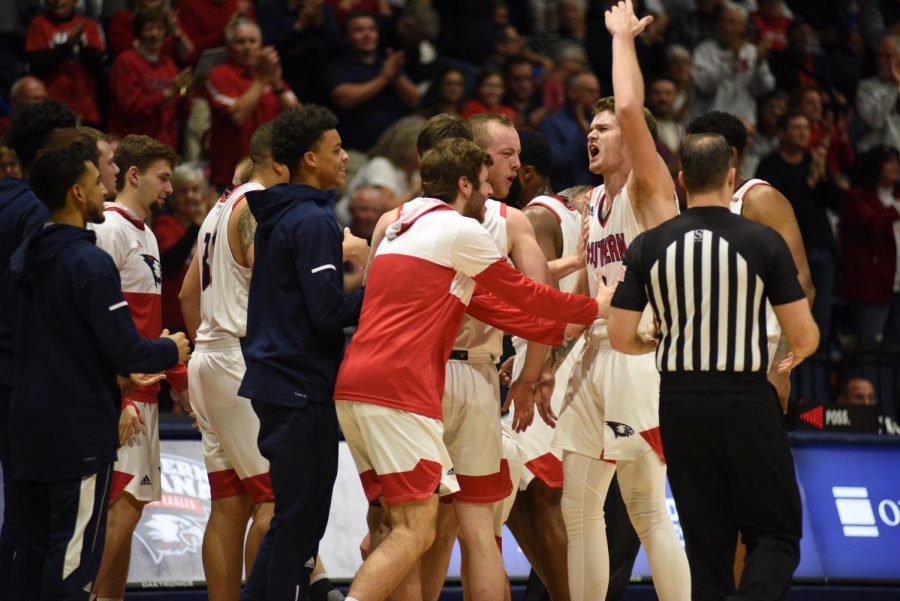 The USI Men’s basketball team celebrates after taking the lead during a timeout against Kentucky Wesleyan College Monday night at the Screaming Eagles Arena.

The stands in the arena filled in a matter of minutes once the doors opened. The student section was filled to the brim as Archie the Eagle was running around and giving high fives.

It was more than just a game, it was the Battle of the Bridge.

The announcer was barely audible over the roar of the crowd when the Screaming Eagles were introduced. They were ready for their fight with the Kentucky Wesleyan Panthers.

The fierce clash with the cross-state rivals kept a steady pace as both teams traded baskets before Panthers head coach Drew Cooper called timeout within the first five minutes. The score stood at 8-6 with Eagles on top.

The Eagles had a strong defense but that quickly failed to the Panthers offensive maneuvers.

USI became clumsy and started to either spread out too much or close in on one or two players, making it easy for the Panthers to break through and score enough points to keep up with the Eagles, eventually surpassing them, 23-20, with seven minutes left in the first half.

The Eagles weren’t able to keep up with the Panthers going into halftime. The score was 37-31 and the Panthers were winning.

The Eagles came back fighting, with a fire that wasn’t seen before in the first half, ready to win. They quickly caught up to the Panthers at the beginning of the second half, down only one point within the first four minutes, 41-40, and then overtaking the Panthers completely with eleven minutes left in the third quarter, 57-42.

The difference was obvious. Not only did the Eagles take the lead against the Panthers but kept up the pace to a 19 point lead before Cooper called for another timeout.

The final score was 82-63, with the Eagles coming out on top and giving Rodney Watson, the men’s basketball head coach, his 232 win. Watson surpassed former coach Bruce Pearl to become the winningest head coach in program history.

The Eagles next game is tonight at 7:30 p.m. against Oakland City at the Screaming Eagles Arena.