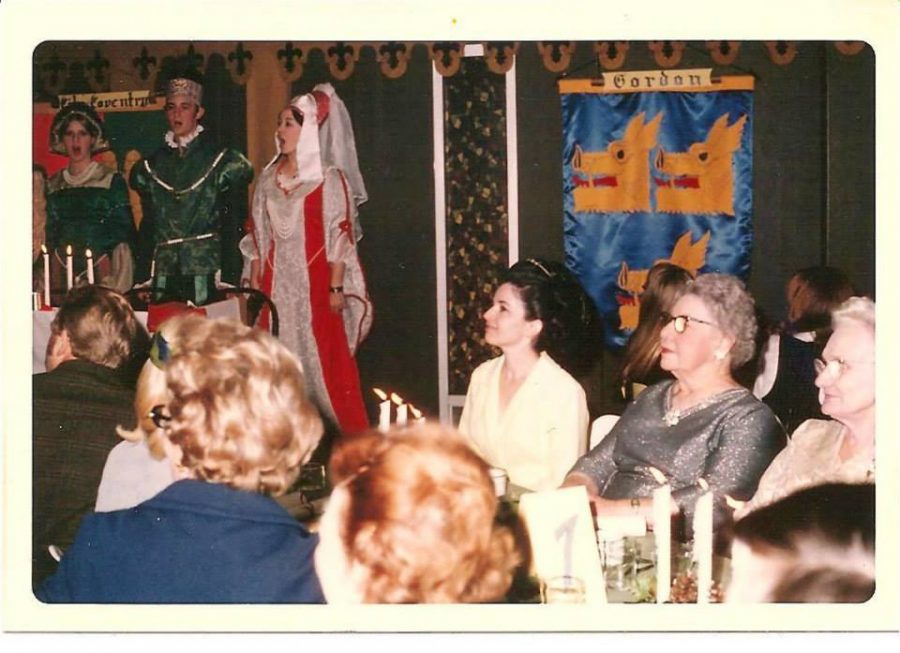 The first USI Madrigal Feast was directed by David Deeg in 1969 in the Forum building.

The first USI Madrigal Feast was hosted in 1969 by the Director of the Mid-American Singers David Deeg. It was catered by Betty Rice, the wife of USI’s first president David Rice.

The Mid-American Singers grew from 16 members to become the university’s Chamber Choir and the event is still going strong 50 years later.

The Chamber Choir will host their annual Madrigal Feaste at 7 p.m. Thursday and Friday and 1 p.m. Sunday in Carter Hall.

The event includes choir members in renaissance period costumes, dancing, and a 15th-century royal feast. The sold-out Saturday performance will conclude with three songs with assistance from over 50 former members of the Chamber Choir as a part of the anniversary.

This is Brooklyn Spindler’s third Madrigal Feaste and she said it feels busier this year. The junior health services major joined the Chamber Choir freshman year and this year she is helping with the costumes for the event.

She said the event is busy, but fun and it helps members of the Chamber Choir bond.

“I really enjoy being a part of it,” Spindler said. “It’s a nice, fun thing to be able to do.”

She said students should consider joining the Chamber Choir because although it’s a lot of work, you end the year with 40 more friends.

Daniel Craig, an associate professor of music, has been the music director of the Chamber Choir since 1990. The first Madrigal Feaste he hosted was the 20th anniversary. The event was held in the loft at the time before Carter Hall was built.

“That’s a long time for any tradition,” Craig said. “It’s nice to know the university has continued to support this community event for so long.”

He said this year is special for him because having alumni join has allowed him to see former students that he hasn’t seen for 30 years. Craig recruited alumni for the performance by gauging interest through Facebook groups.

Craig said the biggest change between then and now for the Feaste is the sheer size of the choir and the need for more space. He said it calls upon a large effort on the students to build the set into that space. This year’s event will also include new costumes provided by the USI Foundation.

Craig said the Madrigal Feaste is the best way to start the holiday season.

He said being the director has been wonderful because he’s been able to see the choir grow and travel to places like Ireland, Poland and Carnegie Hall to perform.

“I’m very proud of the developments that have taken place over the last 30 years and I wouldn’t want to be anywhere else,” he said.