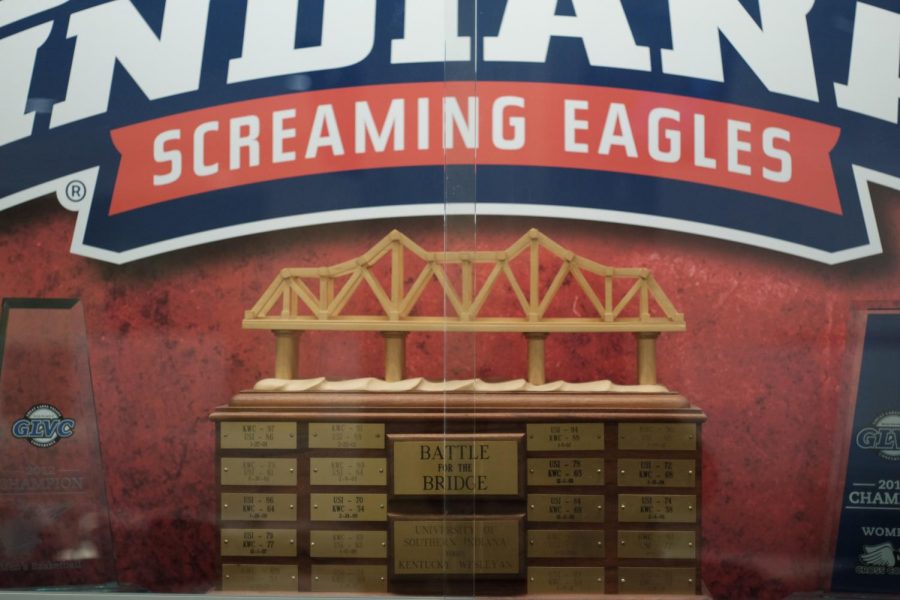 With the annual Battle of the Bridge game coming up on Nov. 18th, the rivalry game against Kentucky Wesleyan College (KWC) is thicker than ever. The historical basketball game has kicked off every basketball season since 1975.

“There are very few rivalries in college basketball and this is one of the best ones in the country at any level,” Men’s Basketball Head Coach Rodney Watson,said. “It was talked about nationally.”

The rivalry has been a long time tradition between these two schools despite KWC leaving the GLVC after the 2012-13 season. Watson said the fight is still strong.

Because of KWC’s decision to split from the GLVC, there had to be a formal agreement between the two schools just to play.

“There’s a lot of history,” Watson said. “And right now it’s more history than it is current. But we have a lot of respect. It’s an important game. We’re still fighting for the same positioning and for postseason play.”

According to the trophy USI has for the Battle of the Bridge, USI has won 11 games in recent history in between 2001 and 2012.

USI defeated KWC in their last matchup in Nov. 2018, and is hoping to do the same again this year on Nov. 18th, the first home game of the men’s basketball season.