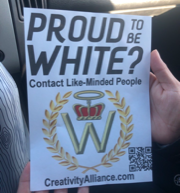 Public Safety became aware of the flyers in the third and fourth row of Parking Lot C towards the north side this afternoon around 2:08 p.m. A Public Safety officer removed the flyers upon arriving on the scene.

Junior Biology major Briana Acree drove her car to campus around 12:40 p.m. to get to class. She discovered the flyer on her car around an hour later.

Senior Finance major William Holbrook said he hasn’t seen white supremacist flyers on his car before and upon seeing the flyer, crumbled it up immediately.

“I think it’s unacceptable on USI, but it occurs, but I don’t know who would do it,” he said.

The same flyer was discovered on vehicles in the campus parking lot on Aug. 6.  Written on the flyers is the phrase “Proud to be White? Contact like-minded people.” They were distributed by a member of the Creativity Alliance, a white supremacist group who claim they are also a religion.

This is the third instance the flyers have been found on cars since last November.

Bequette said that one person reported to Public Safety about the flyers Nov. 12, but there was not a big response from the public.

“Our people are very vigilant for it, they are looking for it,” Public Safety Director Steve Bequette said in an August interview with The Shield. “They always seem to happen on Mondays and Tuesdays, so we had heightened vigilance on those days.”

Bequette also said that he has heard of the flyers being on the University of Evansville’s campus as well.

“The university has been looking for this person for quite some time,” Vice President of Finance and Administration Steve Bridges said.

President Rochon sent out a university-wide email in response to the flyers on Nov. 15:

As you may or may not have heard by now, another round of inflammatory flyers was found on parked vehicles on our campus earlier this week.

While this University values freedom of inquiry and expression as essential to a higher education experience, we do not tolerate the distribution of materials that both violate our University policy on solicitation and can be viewed as harassment.

Our Public Safety team was made aware of the situation and continues to investigate this activity, both current and previous instances. But vigilance is all of our responsibility. If you See Something, Say Something. Anyone with information about the flyers, and/or those distributing them, should contact USI Public Safety at 812-464-1845 or local law enforcement.

In the coming weeks, I will meet with respective constituents across campus to gather community input on how to address this intolerance. We know that the values we share far outweigh the differences we have, and we continue to strive to make all members of our campus community feel safe and protected. Please watch your email for additional information on diversity and inclusion initiatives.

As I have stated before, there is no room for this type of rhetoric on our campus. We value a climate of respect and acceptance of all. As we wrap up this semester and prepare for our fall commencement, I ask that you not let this be a distraction to you. Study hard-Finish strong! Let’s all be role models. Let’s embrace our differences and celebrate what makes our campus unique.”

This story will be updated as more information becomes available. The story was last updated 11/19/19 at 5:08 p.m.