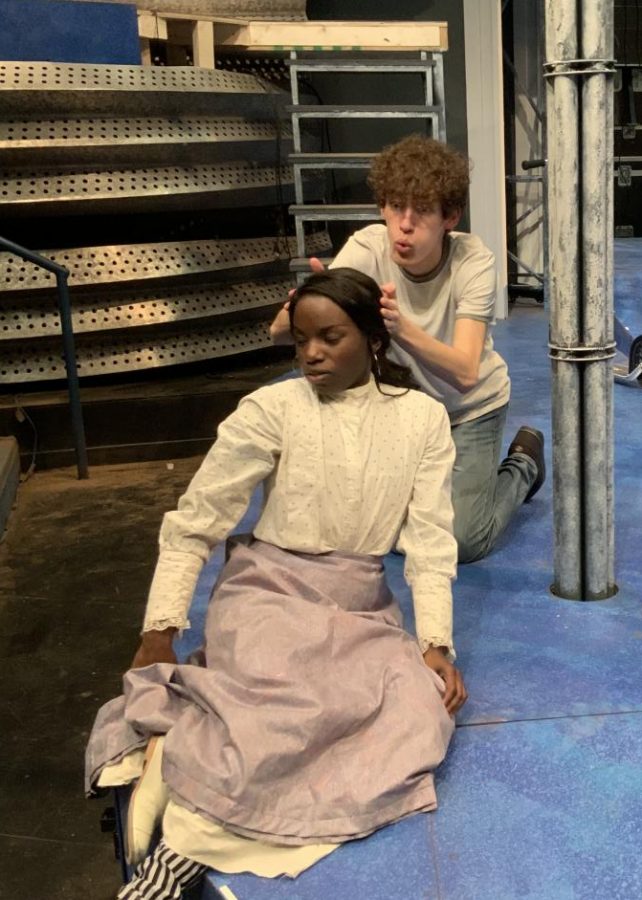 The sophomore theatre major had never worn heelys before he began wearing them after the second or third rehearsal. Crisp would practice with them whenever he wasn’t needed on stage. He said he, luckily, has never fallen down.

“A Midsummer Night’s Dream” is directed by the Chair of the Performing Arts Department Elliot Wasserman. Shakespeare’s play is a comedy that tells the story of fairies who manipulate the lives of humans. This adaptation is set in the Victorian age and adds a twist to the source material with a set that incorporates mechanics and a steampunk look with the supernatural elements and characters.

Crisp had read the script to “A Midsummer Night’s Dream” and he was drawn to the character of Puck, a fairy who causes trouble during the events of the play.

“I just think Puck is such an interesting character,” Crisp said. “I’ve always wanted to play that more mischievous kind of character and Puck is just a trouble maker, simple as that. He’s the one who sets everything in motion and I just always wanted to be a character like that and it’s been a lot of fun so far.”

He said the most challenging thing in the beginning about trying to figure out Puck as a character was the voice and physicality. Crisp was used to playing more nerdy roles so it was interesting for him to play a character more confident in themselves. The voice he uses for Puck is a bit more high pitched than his regular voice and it is usually sing songy because most of Puck’s lines are in rhyme. Crisp also took some inspiration from Peter Pan for the character.

Crisp said rehearsals have been going well. Wasserman would help actors with the Shakespeare language by breaking down bits of dialogue as they go. He said it also helped that many of the actors in this show are friends.

“It’s been a really cool experience being alongside friends and helping each other out with the language,” Crisp said.

Crisp said one of the best things they do during rehearsals is getting Wasserman to laugh by doing stuff that wasn’t intended. He said since the fairy characters are invisible, they will do things in the background and Wasserman will expand on it.

“I think that it’s going to be a really fun show,” Crisp said. “There are scenes that I don’t know how in the world we’re going to get through because there will be non stop laughing. It’s definitely one of the funniest shows I’ve ever been in and I think that the message…is a really good message that I think everybody would be interested in and they will learn a little something about it that they wouldn’t otherwise have.”

Jada Hampton, a senior theatre major, plays Hermia, a star crossed lover who is arranged to marry a man she does not love. Hampton had played a fairy in an outdoor production of the show before, but she said this production is a whole different beast.

“This feels like more for a contemporary audience, not just because it’s inside but because we have an amazing set,” she said. “We have a lot of mechanics a lot of different machinery.”

Hampton said she’s seen other people play Hermia and they’ve either played her as very angry or very bland, but she wanted to show that all her actions are done out of love.

“I tried to incorporate that into her character history because I did not want to make her one note,” Hampton said.  “A lot of us experience love and experience loving someone else and falling in love and I wanted to be able to portray that in a very truthful sense so, at the heart of the comedy, in her character, you can see that she is really just human.”

She said all the actors in the show have brought something different to the table.

“We’re often laughing our butts off in rehearsal trying to stay in character but that’s good because we’re being challenged by the actors around us, not necessarily to be funnier, but to take risks and to explore so that these words that many people might see as outdated or boring or old come to life in a way that’s very relevant to the 21st century,” Hampton said.

Wasserman said this is the first Shakespeare show to be performed in the Performance Center. He said putting Shakespeare shows in different time periods is common and he decided to use steampunk aesthetics so he could use them to highlight the supernatural character with the Victorian garb of the human characters.

Wasserman said students should go see the show because it will be very funny and it will be a great introductory play for anyone interested in Shakespeare.

“This play will erase any doubts students have about Shakespeare being entertaining,” he said.

The show will run from Nov. 14-17 at 7 p.m. Thursday to Saturday and 2 p.m. Sunday in the performance center. USI students can get tickets for $2 with a student ID and free tickets will be available an hour before each show.

“It’s always relevant to do a Shakespeare play,” Wasserman said. “It’s an educational opportunity, not just for our actors, but for the theatre-going community.”