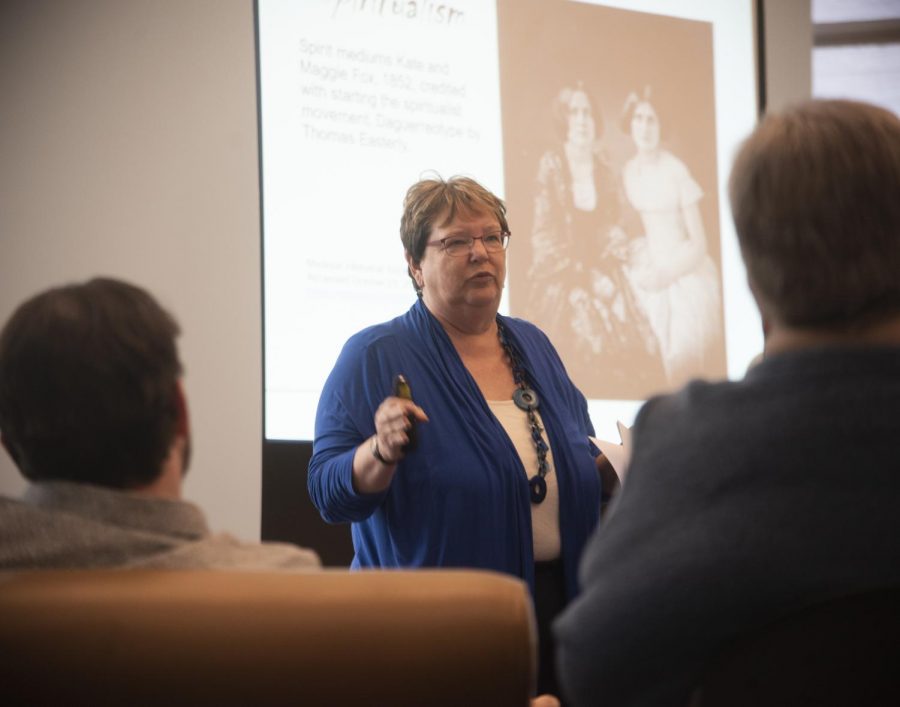 Tamara Hunt, a professor of history and director of the Master of Arts and liberal studies hosted a lecture about Indiana's most popular ghost stories. Nov. 4 in the Rice Library.

Tamara Hunt said she first became interested in ghost stories after trying to find a new genre of short stories to read before bed.

The professor of history and the director of the Master of Arts and Liberal Studies said, in a very short time, she began to collect ghost story volumes from authors like Montague Rhodes James and  Charles Dickens.

She now owns over 500 volumes of ghost stories and has delved deeper into the reason why people find ghost stories interesting and the insight they can give to past times.

“I was curious about ghost stories in this region and of course being me, I couldn’t refrain from talking about it,” she said. “I’m always more than happy to put together a presentation of stuff I love to talk about.”

Hunt held a lecture on Nov. 4 titled “Haunted Indiana: Ghost Stories from the Hoosier State’s Past” in the Rice Library discussing her research through some of Indiana’s most popular ghost stories and the facts that support or disprove the legends.

Hunt did her own research, looking through historical newspapers and county documents from the 19th to the early 20th centuries for instances where ghosts or apparitions were reported.

She said she based her research on these dates due to more recent times being plagued by the rise of ghost tourism.

Hunt discussed not only the ghost stories and possible people related to these stories, but also the language used by the reports, noting some as skeptical, factually unsupported, or as verified fact.

“When you are looking at ghost stories you have to be a little bit cautious,” she said.

She said this event was good for students to see because it showed what historians actually do.

“Most people think that history is going to memorize names and dates, who presidents were and kings and things like that,” Hunt said. “In reality, history is everything and if we ask the right questions about it, it can give us insight not only into the past but to questions we can raise about our own time.”

Jaxen Margason said he was excited to come to the event and learn more about the fascinating subject.

The senior history major said it is not only interesting to learn about different ghost stories and the background behind the idea of ghosts, but also to see what historians are researching.

“I think it’s pretty cool because, as a history major, they teach us that we have to research on our own,” Margason said. “This shows that you are able to research what you are interested in and that you can learn about what you find fascinating.”

Margason said one thing he learned was about the possibility of a Gray Lady haunting Evansville’s Willard Library.

Hunt provided documents to help show the history of the Gray Lady and the origins of the legend to help establish where the story strayed into fiction and clues that might reveal the sighted ghost’s identity.

“Many people don’t investigate the beliefs that they hold until someone holds it up to them and says this is what people believed in the past and this is why,” Hunt said. “Then you start to think why am I believing this.”

Hunt said this is what makes ghost stories important as the stories help bring understanding to the past and to the present.

“The beliefs and understandings that we have today, are not things that just popped up recently,” Hunt said. “We’re drawing on centuries of stories and myths and events. If we’re really to understand what goes on now, we need to understand what went on in the past and how we got to where we are.”

Hunt said she hopes students and faculty learned more about the history of Indiana, the customs and people of the past, how newspapers work and their own beliefs.