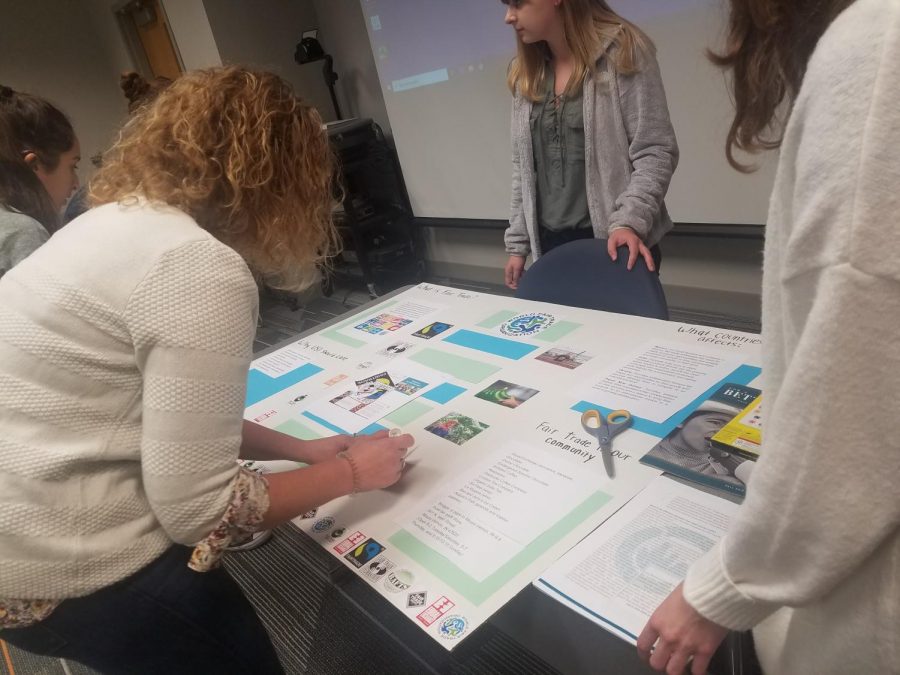 Students in Ellen Topper’s Global Studies Capstone class are advocating for a change.

The instructor of political science and global studies is leading a class project among her students to get USI recognized as a fair trade university. The university will become fair trade if they adopt policies where all food outlets on campus must offer at least two fair trade products.

Topper thought it would be an interesting challenge to present to the class and see how they would work to achieve the goal.

“I think it goes well with the mission and vision of USI to encourage the campus and the students to engage and promote fair trade wherever whenever possible,” Topper said. “They’ve done a lot of work they’ve been excited and engaged with the project and they have come up with some really great ideas for promoting the process of becoming a fair trade university.”

Topper said Sodexo already has a lot of fair trade products available. She said she thinks the only reason USI has not been recognized as fair trade is because no one has gone through the process yet.

Topper got the idea to tackle to project through the class from Teresa Rynkiewich, a senior accounting assistant in the USI Foundation. Rynkiewich has worked in fair trade for about 45 years. She became interested in fair trade after living in Papua New Guinea. When she came back to America, she wanted to find a way to help the workers there. She started a fair trade store in Kentucky and two more, one in Evansville and one in Mt. Vernon, through churches.

“The whole idea is to bring in fair trade products that can be used as gifts and that you tell the story as to how it’s helping the people.”

Rynkiewich said she thinks younger people are already living with the mentality of free trade.

“We have the Earth that we need to take care of,” she said. “It’s about educating more people and finding ways that we can all work together to accomplish the goals of fair trade.”

Lillian Morris, a senior global studies major, has been doing research and putting together posters for the class. She went with the other students to different stores on campus to check for the fair trade logo on the products they sold. She discovered that Aquafina water was fair trade. She said fair trade products seem to be everywhere.

“That’s nice to know that whenever I’m outside campus I can still support fair trade products,” Morris said.

She has seen fair trade discussed in other classes before. She said it’s been interesting to be able to work on a project for the whole campus.

“Instead of just learning about it, you really get an inside view of what it takes to make a campus fair trade,” Morris said. “I feel like it’s definitely opened my eyes to how it doesn’t necessarily take much effort for a campus to switch to fair trade products. It just means making sure that there are a few options available at every store.”

Sheridan Proctor-Zenker, a senior global studies and political science major, is interested in global studies because she is interested in international issues. She learned about fair trade from a book she read in her freshman UNIV class called “Where Am I Eating? An Adventure Through the Global Food Economy” by Kelsey Timmerman.

It makes me feel better knowing where the things that I’m buying are coming from, instead of just guessing and hoping that it was ethically produced,” Proctor-Zenker said. “I don’t want to support slave labor and unfair working conditions.”

She said she feels a lot of guilt from seeing social media videos that circulate the cruel and unethical things that are going on in the world. Proctor-Zenker said that, in America, they import a lot of products, food and clothing and without knowing where they come from.

“When I see the fair trade logo, to me, it means that this is good, I’m supporting something good,” she said. “And if more people supported it then we would stop the slave labor and the cheap labor and the terrible working conditions and the underaged and underpaid workers. It would stop in all the countries where that happens because everyone would be supporting fair trade.”

Proctor-Zenker said students outside the class could help advocate for fair trade by asked employees at the campus food outlets for fair trade products until they notice that students are asking for them.

“When people think of fair trade they think of some weird nut bars but it’s everywhere, it’s spreading,” Proctor-Zenker said.

The Global Studies Capstone class will table on Halloween in the University Center Breezeway. They will have a poster with additional information on fair trade and flyers to pass out.

Topper said the project will bring awareness to the campus for issues surrounding fair trade.

“I think it will be great for the students to have started and worked hard to complete a project such as this that requires moving parts,” she said. “To achieve that in a semester, I think, is pretty impressive.”