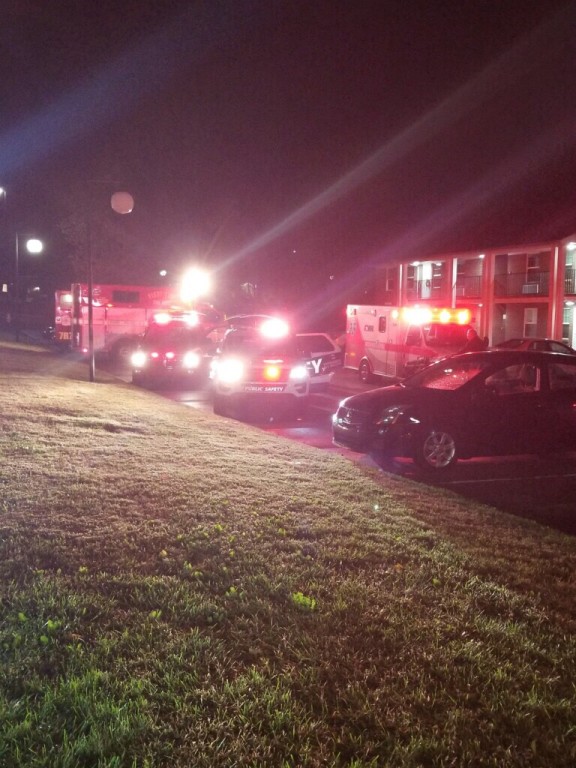 Ambulances and Sheriff cars outside Leslie apartment Oct. 26 after a grease fire.

A grease fire broke out at the Leslie building apartments Saturday night that led to two people being burned.

A firefighter from Perry Township Fire Department, who wished to remain anonymous, said that they got the call for a reported fire alarm.

Director of Public Safety Steve Bequette said investigators believe the cause of the fire was hot grease and the two women involved had attempted to put it out with water.

“The two students were transported to a local hospital for treatment of second degree burns,” Bequette said.

Bequette said the apartment has minor damage and the university’s Physical Plant will be going in to clean up the grease. He said the walls would need to be repainted and the floor had to be cleaned.

Occupants were allowed back in the apartment after cleanup.

If a grease fire starts, cover the flames with a cool metal lid or a cookie sheet. Turn off the heat source right away. Pour baking soda or salt on the fire if it’s small and manageable. As a last resort, use a fire extinguisher.

Do not try to put the fire out with water or move the pot or pan.

If the fire is unmanageable and can’t be put out, get out immediately. Close the door to try to contain the fire and contact 911 immediately. Do not re-enter until the fire has been contained.

Some tips for preventing grease fires include staying in the kitchen when cooking food. Leaving food unattended while it’s frying, boiling or broiling is one of the leading causes of fires in the kitchen. Keep anything that can catch fire away from the stove and heat oil slowly.

Don’t use flour, baking powder or other cooking powders that resemble baking soda or salt. They have different chemical makeups and won’t react the same. It will make the fire worse.

The university provides a detailed plan for what to do in case of a fire. It includes fire alarm notification systems, pre-plan escape plans, evacuating and what students should do if they discover a fire.

It also provides guidance on reporting a fire or explosion and what the Public Safety Department will do when they receive a call about a fire.