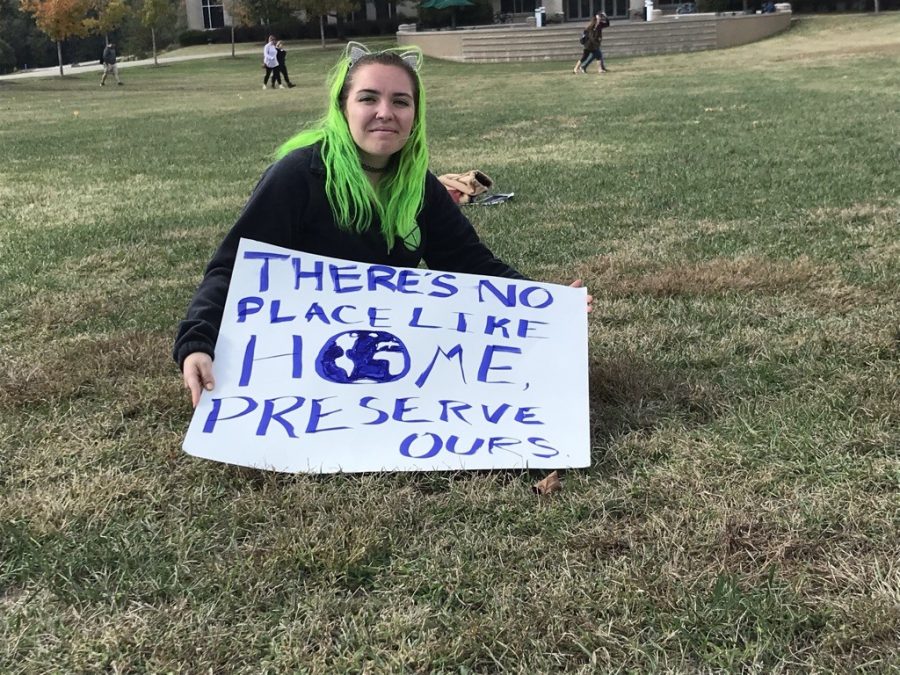 William Bowens believes the climate crisis deserves more than a few minutes and a question on the debate stage.

“I find it mind-boggling that we are talking about how the Earth is on fire and we are amidst a mass extinction for species and the entire world’s ecological systems are collapsing and nobody fucking cares,” he said. “Everyone walks by us like we are weird hippies and it’s mind-boggling.”

Bowens, the co-organizer for the Extinction Rebellion-Evansville’s “die-in,” chanted “powerful forces are controlling our world, they’ve been controlling it for decades, for centuries,” as students walked by on the quad last Wednesday afternoon.

Students and professors from USI and the University of Evansville and community members brought signs and chanted through a megaphone to bring attention to the climate crisis.

“We are here in solidarity with the extinction rebellion movement that is happening around the world,” Bowens said. “People are participating in massive actions and they are shutting down bridges and streets and supergluing themselves to things. We didn’t think we are nearly at the level in this area, especially just starting out, to participate in that type of civil disobedience.”

The Extinction Rebellion is a global environmental movement, backed by Greta Thunberg, where protestors use nonviolent civil disobedience to compel government action.

Bowens said their main goal is, to tell the truth about what is happening.

“We are in the midst of a climate crisis and extinction of species and eventually the human race is at risk of extinction,” he said. “Because we live in this ecosystem which is in catastrophic decline and if we don’t start getting our act together…the catastrophic things we are facing already, will be too late.”

Bowens said the reaction from students isn’t where he would like it to be, and people are in denial about the catastrophic effects of climate change.

“I think it’s mainly that a lot of these people do realize what’s happening…but it’s too hard to wrap your mind around that it is the end of the world,” the senior philosophy major said. “They all have busy lives and there’s midterms but we got to do more.”

Bowens said this isn’t a pet issue and shouldn’t be dismissed because it will affect everyone.

Josie Ault, a junior undecided major, said she helped Bowens co-organize the event so they could come to a higher learning institution to demand people come together and demand legislative action.

“We demand action from our local community because no one here is helping or looking out for the people of Evansville,” she said.

Ault said one of the main problems is the complicit nature of passive beings when it comes to activism and protesting.

“That is what the system has molded us into, they’ve made us believe that we genuinely can’t do anything about this issue and this is beyond our control and it isn’t the things that we do every day that fuel our convenience that have led us into this position,” she said. “We need to call for individuals action and call for corporations and higher education institutions to pay attention to us.”

Ault said although it can be hard to always remember to use a reusable tote, or try using a reusable straw, it’s important to still try and make a conscious effort.

“We have to take matters into our own hands,” she said. “…Time is running out.”