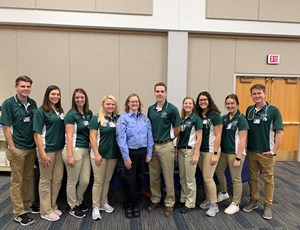 On Aug. 18, Staff Sergeant Tami Jaramillo Zuniga was stung by a bee that triggered a major anaphylactic reaction. The officer in distress was rushed by ambulance to Deaconess Gateway Hospital in Warrick County.

Zuniga was taken to the hospital by Warrick County EMS. The paramedic with Zuniga told the nurse that Zuniga felt like her throat was closing up and the nurse looked at her throat. The nurse then called the doctor who decided to move Zuniga to a larger room. The doctor then decides to intubated Zuniga.

Intubating is a medical procedure where the patient is inserted with a tube. The tube is inserted when a patient can’t breathe on their own so it acts as an artificial airway. The tubes are connected to a ventilator which moves the air in and out of the patient’s lungs.

Zuniga was hospitalized for six days. The staff sergeant was initially brought into the emergency room and from there was moved to the ICU. After being in the ICU, she was finally moved to a regular room where she spent the remainder of her time at Deaconess.

The team of respiratory therapists that monitored Zuniga were mostly graduates from USI’s Respiratory Therapy Program. Zuniga said that even though their interactions were limited, the team was very quick and professional.

“They were very calming because of their professionalism, they made everything so much easier,” Zuniga said.

The second type of RT program USI offers is a complete program. This is for students who already have an associate’s degree and want to get their bachelor’s degree. This type of program is online and can be completed in about two years.

Assistant Professor of Respiratory Therapy, Julie Morgan was very emotional when she heard about the graduates saving the public safety officer. Morgan knows that the graduates had a big impact on Zuniga’s daughter who was with her during the whole experience.

“Her daughter was right with her from the get-go at the hospital and she was present during the worst of the worst and also when she was getting better and coming off the ventilator,” Morgan said. “I guess from that, her daughter said from seeing how the respiratory therapists interacted with her, she is interested in respiratory therapy now.”

“It’s gratifying for us as instructors to hear what our students are doing, to know that we had a little bit to do with their education,” Phy said. “So I mean, it’s kind of an extension of us in away. I know that I miss being out in the clinic setting but it’s almost like you pass on a piece of yourself to that student.”