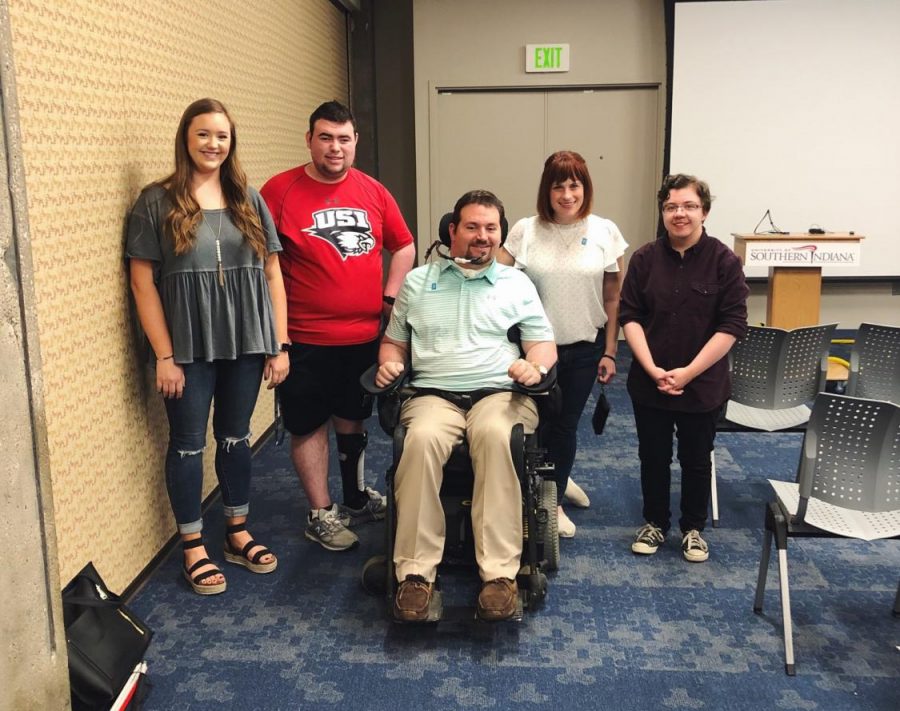 Members of Disability Coalition at an event with Ben Trockman, Diversity and Inclusion Specialist at Old National Bank.

Gabby Walker is very passionate about bridging the gap between the disabled and the abled and she wants to spread awareness and education about disability.

Disability Coalitions is an organization that helps students learn more about the community of people with disabilities. The group has meetings every Tuesday at 6 p.m. in the Liberal Arts Building room 2003. Meetings usually include discussions covering topics like the Americans with Disabilities Act, sign language and certain sub-sects of the community.

Walker said she learned a lot from the club.

“It’s good to get interaction between different students who may know more about disabilities than I already do so it’s good to just broaden your knowledge on that,” she said.

The group is looking to plan events for the spring semester and collaborate with other clubs.

“If you’re interested in learning more about disabilities or understanding the disability community I encourage you to come because it will help widen your knowledge about something you didn’t already know,” Walker said.

Pfingston, the treasurer, helped found the club after noticing that disability was largely ignored on campus in terms of diversity efforts. He said that since a large majority of the club’s leadership is disabled, it helps humanize disabled people by providing a space that promoted awareness and acceptance.

“We’re here for everybody,” Pfingston said. “You don’t have to be disabled to be a part of the conversation. We also accept people with all sorts of knowledge on the topic, whether they’re well versed in disability theory, or they know nothing about it and just want to learn.”

He said student’s awareness of disability is lacking and most people benefit from seeing disability as a social orientation and not just a medical fact of life.

Abigail Kifer first heard about the club through social media and her participation in Emerging Leaders. The sophomore pre-occupational major thought it would be good to learn about disability because she didn’t think she was educated on the topic. She became the secretary of the club this semester after messaging Laine.

Kifer takes notes during meetings and she said it’s an important job because the meetings are discussion based. She said the club spreads awareness for people who are abled bodied but also gives a voice to be able to hear the complaints of people who do have disabilities and how to make USI a more accessible place for them.

“For me personally I see it as a career-building opportunity,” Kifer said. “I didn’t know very much about the disability community so it really opened my eyes and I think it’s so much more than just a career. People with disabilities are everywhere.”

Walker said she is really happy to be a part of the club and it changed how she saw disability.

“It’s widened my education and it’s helped me in my daily life,” Walker said. “Since my best friend (Laine) has a disability, it helped me understand the community as a whole.”