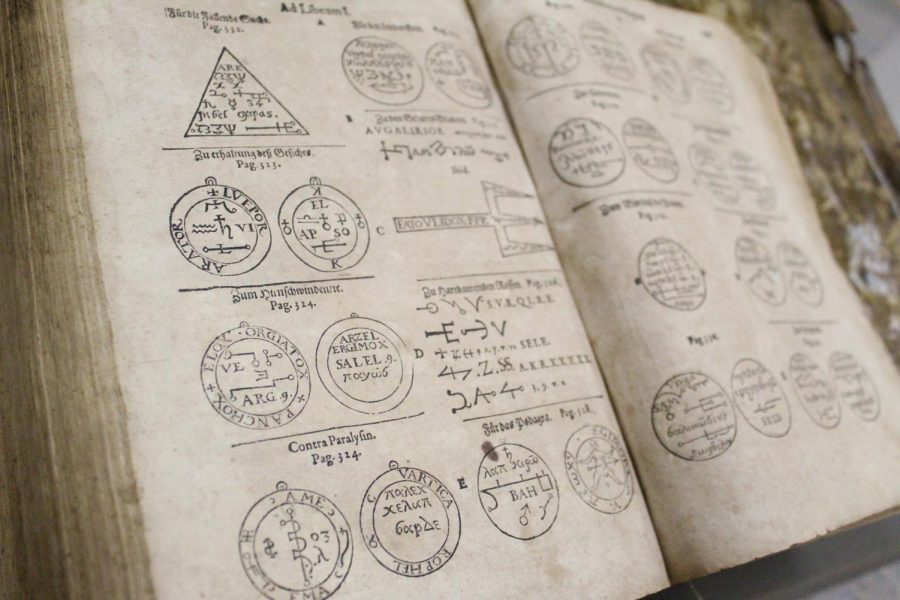 This 400 year old book is a part of a two volume set and an item from the University Archives and Special Collections.

Deanna Engler’s favorite item in the University Archives and Special Collections is a two-volume book set from the year 1603.

The library associate and USI history graduate calls the second volume of the set the “Harry Potter Book” because its contents include alchemy and magic. Engler thinks the books are cool because they are the oldest items in the Rice Library and it says a lot about late renaissance history and Germanic culture.

“It tells you a lot about education at that time…so to me it’s really cool,” Engler said. “Plus, who doesn’t just want to hold a 400-year-old book too, right?”

The University Archives and Special Collections (UASC) was established in 1972 and it has been a resource for materials relating to the historical development of USI and the surrounding area. This includes photos, documents, and objects stored on the third floor of the Rice Library and digital copies of the photos and documents that can be found online through the UASC Digital Collections. UASC is currently holding its annual Archivesfest until Oct. 25.

Engler said part of the reason UASC started Archivesfest and Arch Madness in the spring is so they can show parts in their collection that are not normally up for display so students can see items they didn’t know they had.

Engler started working full time in the UASC in 2008 after working for the assistant director of the Rice Library in 2003. She had previously worked at the Evansville Vanderburgh Public Library after college and when the job opened up she was interested in working at an academic library as opposed to a public one. Engler had a background in history and became interested in what was held in the archives and so she took the full-time position when it opened up.

“We’ve really grown from being sort of an unknown little entity from the library, a little gem,” Engler said.

She said in the ten years she’s worked in UASC, it has grown in its exposure to faculty and students through student projects and donations. UASC currently has four full-time staff members and eight student workers, according to Engler.

“I see our role as being custodians of history,” Engler said. “We try our best to preserve this history. Both the University’s history because it’s a unique history and we’re a relatively young university…but also, we have a lot of historic material.”

Engler said the UASC has a lot of material relating to local history and businesses. She said the push to get more documents online is to make the information stored in the archives available to students and the general public, but she also encourages students to come in and interact with the physical items they have.

“We encourage people to actually handle it and touch it because we want you to touch this letter and feel the paper and feel the ink and feel the history about it because a lot of people have never handled documents that old or seen something that old,” Engler said. “To actually touch it and hold it and feel it and think about when was it made and how long it has been around and who was the last person to touch it is really cool.”

Engler said she drives home to students on tours that UASC is a repository of primary resources. She said they have items that cover a wide range of topics that can be useful for a lot of majors.

She said, regardless of a student’s major, there’s a good chance they can find something that could be useful for a student.

“The idea that this is a place full of primary resources that can give you information and that also can give you context to the stuff you’re reading about,” Engler said.

Jennifer Greene, the University Archivist, said one of the things that set USI’s archives apart from others is access. She said they provide a very comfortable environment for students and faculty where they can interact more with the items.

“We try to show people that archives are fun,” Greene said.

Her favorite item in the collection is a traveling salesman’s suitcase from the 1950s.

“It’s just something you don’t expect to find in the archives,” Greene said.

She said she wants students to know that they are allowed to come into the archives to browse and see the displays.

James Wethington is also a USI history graduate and works full time at UASC as a senior library assistant. He originally worked as a student worker at the Rice Library in 2012 before moving to the archives in 2013. He was able to come back after he graduated for a full-time position in 2015.

Wethington deals with the social media aspect of the department and for the last four years he has been using the UASC Facebook, Twitter and Instagram accounts to show off items they have that students might not know about. He said students come into the UASC to ask about items they saw online.

Wethington said, as a history nerd, he loves the idea of being able to connect with and preserve the items in the archives because they are unique and if they were gone, the history would be lost.

“We’re preserving this history for future generations to come because they need to know, they need to have access to it, regardless if they disagree with it,” he said. .”We have documents that show and talk about different events and different issues going on at the time and it needs to be preserved for the future to come.”

Wethington’s favorite item in the collection is a megaphone signed by UCLA Men’s Basketball Coach John Wooden who came to USI in 1976. He said students get excited when he tells them that it was touched and signed by the famous coach.