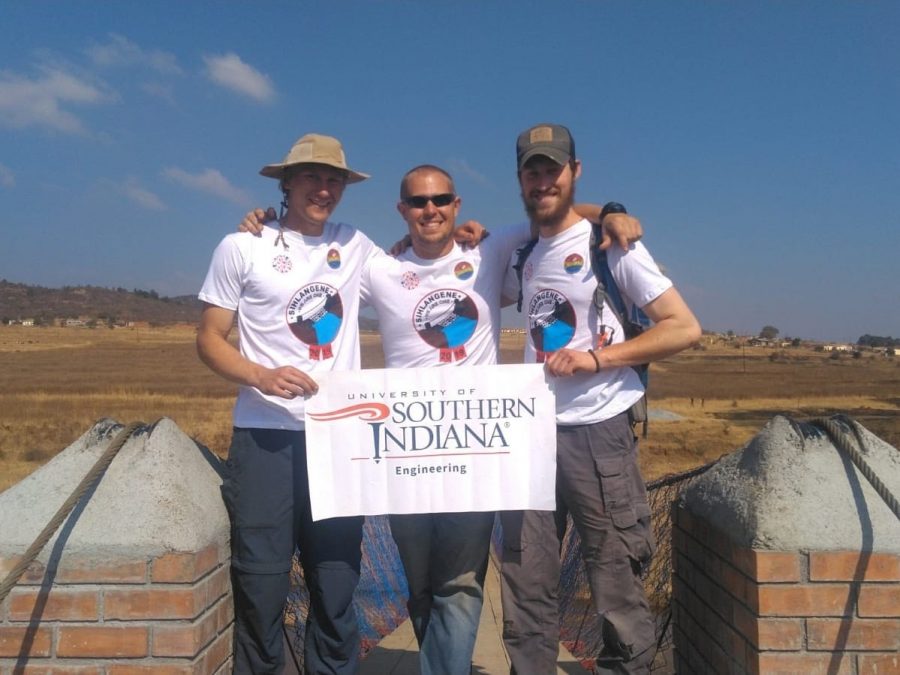 Every other week the Shield will interview a student involved in volunteer work. This week, Koby Lindner and Josef Winkler talk about their involvement building a bridge in Mdlasomi, Eswatini.

A nearly 100-meter long suspension bridge sits across the Ngwempisi River in the African country of Eswatini. The bridge will be a way for students to cross safely during the rainy season and it was built with the help of members of the nearby Mdlasomi community, students from Cornell University and students and faculty from USI.

Koby Lindner and Josef Winkler were the two USI students that went on the trip to Eswatini to help with the construction of the bridge. The bridge was built as a part of the Engineer’s in Action (EIA) Bridge Project. EIA works with different universities on different projects with their main focus being on bridge building in Bolivia and Eswatini.

Lindner, a sophomore mechanical engineering major, found out about the trip after receiving an email from Adam Tennant, an assistant professor of engineering. Lindner was interested in studying abroad, but it never lined up with his engineering classes. He prayed to God for an opportunity to go abroad before he got the email.

The team arrived in Johannesburg, South Africa in June, where they would stay for eight weeks in the community of Mdlasomi working on the bridge. Lindner said living with the community was great because it wasn’t like being a tourist.

“We were living in someone else’s normal,” he said. “That was really good to see their culture and their side of it.”

According to Lindner, Cornell University did most of the work with designing the bridge and it was exciting to see the students in person after interacting with them through video chats. The work consisted of digging holes for weights, building concrete ramps on either side and looping on the cables. Lindner had worked in a construction site before.

“It was really interesting to see a construction site with these university students and all these other people from this other culture,” he said.

The team finished the bridge on Aug. 1. Lindner said when they finished the last concrete batch everyone was really excited and happy. The day they left an inauguration was held were students from the schools got to cross the bridge. There was an event that involved food and traditional dances and members of the bridge team got to meet government officials.

Winkler, a junior mechanical engineering major, also went on the trip after receiving an email.  He said it was a cool experience because he had never been out of the country before

“I loved the area,” Winkler said.  “It’s a very different culture, but the people there were still the same people…I made a lot of friends there that I still talk to.”

Winkler said it felt amazing to see the bridge inauguration and to know the students wouldn’t have to put themselves in danger anymore to cross the bridge.

Lindner said the trip was an incredible living opportunity because, for a part of his life, he got to live in this area. He recommends volunteer opportunities like this to anyone interested in engineering, traveling or helping people.

“Making a really visual difference for people this is a really good thing,” Lindner said.