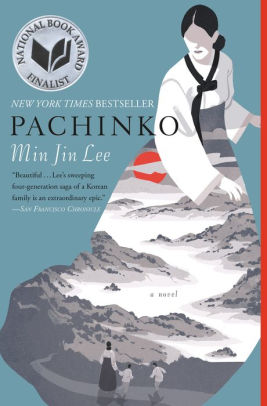 Four generations of a family are told in “Pachinko” by Min Jin Lee. It follows the family’s struggle to go against their fates. Min Jin Lee tells a breathtaking story about love and history set throughout the twentieth century.

Sunja and her family, a crippled fisherman as a father and a mother from a poor family, lived near a seashore village in Korea. They have all experienced the hardships life has to throw at them. Sunha’s parents had to work hard their whole lives, and when Sunja falls for a wealthy stranger and gets pregnant, she realizes her fate may be hard to avoid.

Society is not kind to an unmarried pregnant woman, but an ill traveling minister pities Sunja and offers to marry her. They head to Osaka, Japan to start a new life. Through a time of Japanese colonization and political warfare, Sunja discovers the truth of her son’s father, unraveling the soon to be told drama. Sunja’s choices will affect their family for generations, leaving the characters a difficult fate to outrun.

“Pachinko” is not just a love story or a dramatic saga. The novel recounts history through fiction. History can be told one-sidedly, and Min Jin Lee tells a story of what it was like for a Korean during a time of political warfare. There are real feelings behind the characters. The main characters struggle with acceptance and a sense of belonging, caused by the war and the political warfare around them.

The plot moves rather fast, but it does not distort the feelings they project. Instead, some moments are fast and filled with anticipation as others are slow and captivating. Overall, these moments reflect the characters and their thinking processes. With many main characters, it’s possible to connect and sympathize with them, and although big life events happen and not much is explained about them, the writing style reflects the characters and their idea that life moves on.

It’s depressing seeing characters come and go, but the characters are living through a difficult time in history. In order to move on, one must forget. Min Jin Lee shows the idea that traumatic events should be remembered through her characters and writing style, but at the same time, if one consumes themselves in the past, they will never be able to move on.

All characters are diverse in their own ways, shaped by their surroundings. The pain the characters feel is not belittled or glorified. Instead, the characters adapt to what’s happening around them and try to make the best of their situations. Min Jin Lee intertwines personal stories with political context, creating the heartbreaking story of “Pachinko.”

Issues involving racism, classism, gender discrimination, and more help define the world the novel is set in. It’s important to know that world is real. It’s actual history. Min Jin Lee did not write “Pachinko” for entertainment but to tell about an event that shaped and affects people today. It’s a beautifully written book that does more than tell a story.